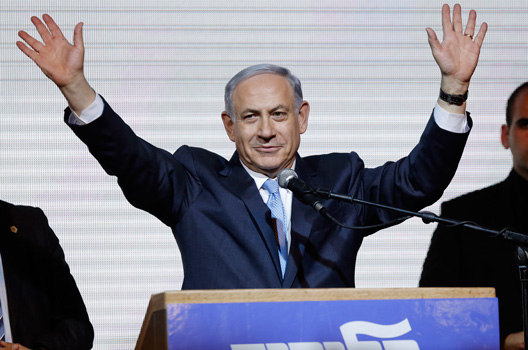 The Obama administration may refuse to protect Israel at the United Nations Security Council if Benjamin Netanyahu forms a narrow right-wing coalition government. But the White House would find it much harder to do so if the Prime Minister includes partners from the center-left, especially his chief rival, says Gil Tamary, Washington Bureau Chief for Israel’s Channel 10 News.

Netanyahu pulled off a stunning election victory March 18 after polls leading up to the vote had him trailing his main challenger, Isaac Herzog of the Zionist Union. In the end, Netanyahu’s Likud party won thirty seats and the Zionist Union twenty-four.

“It is the biggest victory ever for Netanyahu as a politician in Israel. What he did is comparable to a landslide,” Tamary said in an interview with the New Atlanticist.

But that victory may prove to be costly. In a desperate attempt to rally his right-wing base, Netanyahu announced that he would not allow a Palestinian state should he win. He also lashed out at the large turnout among Arab-Israeli voters.

Netanyahu’s reversal of his position on Palestinian statehood has infuriated the Obama administration, which supports a two-state solution for Israel and the Palestinians. The frosty relationship between “Bibi” and US President Barack Obama has been further strained by the Prime Minister’s relentless criticism of nuclear talks with Iran, and his decision to accept an invitation from House Speaker John Boehner (R-OH) to lecture Congress on the dangers of such a deal.

“Netanyahu did whatever he needed to do in order to secure his victory. For that he jeopardized the number one strategic asset that Israel has—bipartisan support of the United States of America,” said Tamary.

“Even though [Obama and Netanyahu] hate each other, they must find a way to work together,” he said. “But it would be much easier for the Israeli government to work with the US government if there is a unity government that includes Labor.”

As Netanyahu goes about building a coalition, support from Moshe Kahlon’s Kulanu party—which won ten seats in the 120-member Knesset—will be crucial. Kulanu includes Michael Oren, Israel’s former Ambassador to the United States and a former Ambassador-in-Residence at the Atlantic Council, who has criticized Netanyahu’s foreign policies.

Tamary spoke in a phone interview with the New Atlanticist’s Ashish Kumar Sen. Excerpts below:

Q: Last week, Prime Minister Netanyahu’s Likud party was trailing behind the center-left Zionist Union in the polls. Today he declared victory. To what does he owe his reversal of fortunes?

Tamary: It is the biggest victory ever for Netanyahu as a politician in Israel. What he did is comparable to a landslide. Just a few days ago Netanyahu was, politically speaking, a dead man walking. Suddenly he was able to emerge again like a phoenix from the ashes. In his victory speech, the crowd shouted “the magician, the magician, the magician” because it was like magic. Even he himself, I don’t think, anticipated such a victory. You will see in the next few days when he will try to form a coalition that he has a very significant majority.

It seems that Netanyahu is the best campaigner and the best politician in Israel. Just a few days ago he was behind by four or five seats. This time Netanyahu has all the political cards in his hands. He can decide who will be his partner. If he would like to establish a narrow right-wing government, this is a viable option for him. He can bring together sixty-four, maybe sixty-five members of the Knesset to create a very right-wing coalition. Even though he said during the campaign that he would never form a unity government with Labor, this is an option because he has a clear lead over the rest of the Israeli political map. He can call Labor in and offer Herzog the position of Foreign Minister. Another alternative is to bring Yair Lapid’s Yesh Atid [Hebrew for “There is a Future”] party into the government to create a center-right government. And because he has had such a big victory, he will not have to pay a big political price in bargaining with the parties when it comes to building the coalition. No one will be able to demand from him any office that he does not want to give.

Q: President Reuven Rivlin has suggested a national unity government. How likely is such a scenario?

Tamary: The President of Israel will put this option on the table. But it seems today that the right wing has a clear majority today and a clear path to create a government if they want to. If Herzog joins the government, he wouldn’t be such a major player as he could have been if the right-wing parties did not have this majority.

Q: Moshe Kahlon has emerged as the kingmaker in this election. Which way is his Kulanu party likely to go?

He hasn’t said specifically, but he has hinted that he will support a unity government. He used the words “not a left-wing” and “not a right-wing” government. He can be a catalyst for creating such a unity government. But because of the Israeli political system, Kahlon is in a tricky situation right now. If he doesn’t join the Netanyahu government fast enough someone else can get the position Kahlon wants: the Finance Ministry.

Kahlon is in a big dilemma. On one side he would like to persuade Netanyahu to call Labor into the government, on the other, if he does not act fast enough he can find himself in a position where he doesn’t get his desired post, which is to become Finance Minister of Israel.

Q: Can Netanyahu form a government without Kahlon?

Tamary: No, he cannot, especially if Kahlon forms a united front with [Avigdor] Lieberman who hinted in a speech on [Tuesday night] that he and Kahlon would form a united front that will demand that Netanyahu bring into the government parties that they would like, probably Labor.

Labor is facing a very big dilemma. Herzog portrayed himself as an alternative to Netanyahu and if suddenly he’s running to join his government that could be a problem for him in his own party.

Q: Could a Netanyahu victory further deepen the rift between the US and Israel, particularly given the Prime Minister’s recent declaration not to allow the formation of a Palestinian state and strong opposition to nuclear negotiations with Iran?

Tamary: Netanyahu did whatever he needed to do in order to secure his victory. For that he jeopardized the No. 1 strategic asset that Israel has—bipartisan support of the United States of America. He clearly used the United States in his campaign. He will tell you that he did it because of the merit of things, but many in Israel believe he used it only for his campaign.

You need to remember that things that you say on the eve of the election do not necessarily restrict you after you have won the election.

No doubt the relations between Obama and Netanyahu are the worst between the President of the United States and the Prime Minister of Israel in Israel’s history. It will be a challenge for him to try and recover that relationship.

Q: What effect will Netanyahu’s statement on a Palestinian state and criticism of the high Arab voter turnout have on the Middle East peace process? Will such statements to put down to election rhetoric?

Tamary: He said there will be no Palestinian state in his time, but that doesn’t mean they cannot negotiate. They can negotiate. But no one has promised that they will reach there eventually. It is quite open for interpretations. He could also make another speech in which he softens his position. It will be a very difficult maneuver for him, but as we saw recently Netanyahu was able to regain force when everyone believed that he is very close to losing the election.

I think [Netanyahu’s statement] was a political use of sentiment among the hardliners and right-wing part of the political map of Israel. Until a few days ago, the right didn’t have any enthusiasm to come out and vote. The people from the center to the left were enthusiastic. The outcome was that at the polls it appeared Netanyahu is going to lose the election. What Netanyahu did in the last few days was an unbelievable campaign—he was interviewed almost everywhere. He called to the flag all the people from the right part of Israel’s political map and they showed up. The bottom line is he was now written one of his biggest success stories ever.

Q: How will the Obama administration respond to a Netanyahu victory?

Tamary: The fact that until [Tuesday night] the White House hasn’t responded shows you they are not happy with the results, but they will have to live with it. What should we anticipate in the coming months? Many people will say the United States will find ways to sanction Israel. Will aid to Israel be blocked? This is nonsense. None of this will happen. When Israel is in a crisis the United States and the Obama administration will be there for Israel. But when it comes to the international arena, for instance to defend Israel at the United Nations Security Council, I am not so sure we will see the United States use its veto power the veto power as fast as they did in the past. This will be one of the penalties that the administration might consider because of the lack of satisfaction with Netanyahu’s policies.

But this will depend on the type of coalition Netanyahu forms. If it is a narrow right-wing government then for the Obama administration it will be much easier to use this weapon. But if it is a unity government, and especially if Herzog is the Foreign Minister, it will be much harder for the Obama administration not to support Israel the way they used to until this election.