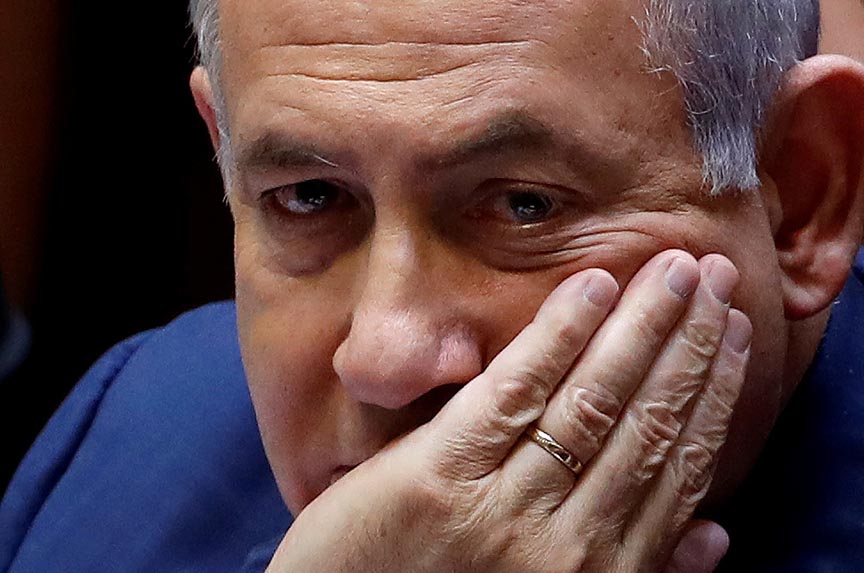 Bleary-eyed Israelis woke on the morning after Israel’s April 9 election to greater clarity about their immediate political future. Having gone to sleep on the evening of the ballot with exit polls forecasting — albeit, inconclusively — a dead heat between the two anchor parties (Likud and Blue-White) and their respective ideological blocs, Israelis now face the likely prospect of a fifth Netanyahu government.

Roughly 68 percent of eligible voters turned out to cast their lots with one of forty parties contending to enter the incoming 21st Knesset. Benjamin Netanyahu’s ruling Likud Party and the new Blue-White alliance — carved out barely two months ago by three former Israel Defense Forces chiefs-of-staff and Yesh Atid leader Yair Lapid — are poised tentatively to win an equal number of thirty-five seats in the 120-member parliament.

Benny Gantz, Blue-White’s nominee to replace Netanyahu as prime minister, mounted a spirited challenge to Netanyahu’s leadership, but the idiosyncrasies of Israel’s electoral system have reduced Gantz’s chances of success to highly improbable — if not impossible.

Once all the ballots are tallied, Israel’s president, Reuven Rivlin, will summon representatives of all the lists that have crossed the 3.25 percent electoral threshold and seek their recommendation of a candidate to form the country’s next governing coalition. A majority of them will, by all accounts, tap Netanyahu as their preferred option.

In the final run-up to the vote, Netanyahu and Gantz each issued resolute calls to back their individual bids for power. The public complied largely, forsaking support for smaller “boutique” parties in orbit around either the Likud or Blue-White. Some factions — including, most prominently, the one headed by sitting ministers Naftali Bennett (Education) and Ayelet Shaked (Justice) — are standing on the precipice, at risk of being eliminated entirely by what Israelis refer to as this wholesale “drinking up” of their followers.

Most of the parties to emerge intact on the other side of the election fall comfortably within Netanyahu’s camp. Agudat Yisrael and Shas, Israel’s two Ultra-Orthodox political amalgams, appear to have captured a combined total of sixteen seats which are almost guaranteed to ally with Netanyahu. (Their voice is that of a rapidly expanding demographic in Israel.) Together with a collection of other satellite parties that are oriented toward Likud policies, they promise to grant the incumbent an edge over Gantz.

None of this means that the horse-trading stage — during which Netanyahu’s potential partners will all compete for key postings in his administration — will go smoothly. Netanyahu may even threaten that “unreasonable” demands are compelling him to change course and seek a unity government with Blue-White instead of a more homogeneous, right-wing alternative. Historically, this process has taken many weeks to complete.

Assuming that Netanyahu succeeds in his mission to lead Israel’s 35th government, the spotlight will then return to three primary theaters.

On the security front, Israelis will look to their leaders, first and foremost, to provide an effective response to heightened tensions with Hamas, including the recent launch of rockets from the Gaza Strip into Israel’s heartland. Iran will figure in this discourse as well.

Diplomatically, Israelis have been engaged in a broad debate about the possible contours and roll-out of a Trump-inspired plan for Middle East peace. During the campaign, US President Donald J. Trump’s blueprint even became a lightning rod for some right-wing parties which advocated resistance to certain concessions that it could entail from Israel. Netanyahu will have to chart a cautious course between preserving his close cooperation with the White House and withstanding pressure from members of his political base to reject any US regional designs that might run afoul of their aspirations.

Finally, Netanyahu’s legal troubles will soon be back in the headlines. The prime minister — who is facing charges on multiple counts of bribery, fraud, and breach of trust — is slated to appear for a hearing before Israel’s attorney-general within the next few months, hoping to stave off formal indictment. An earlier decision had withheld the transfer of relevant evidence to Netanyahu’s attorneys prior to the election, in order to keep the material from impacting the results of the ballot, but the coming weeks are certain to witness an avalanche of incriminating stories about Netanyahu, who will be pulled back into the eye of the storm.

Some of Netanyahu’s more enterprising allies are floating intentions to extend him immunity from prosecution for the duration of his term, giving rise to concerns about what quid pro quo that might involve. The outcome of this proposition may hold the answer not only to the personal fate of Netanyahu — in his 11th straight year as Israel’s prime minister — but also to the question of whether his country might find itself embroiled in another election campaign before too long.