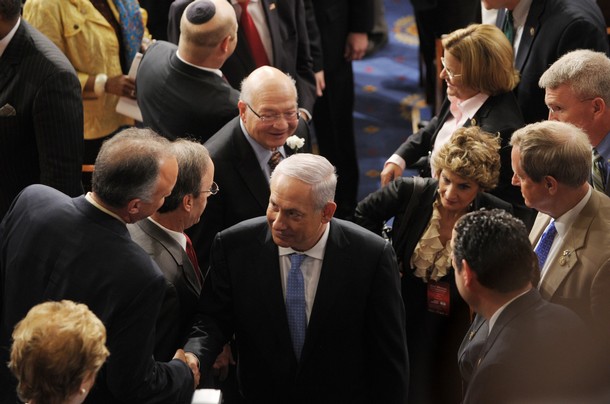 Only a fool could believe that Israeli Prime Minister Binyamin Netanyahu, whatever he says to the contrary, has any interest in reviving the all-but-dead peace talks with the Palestinians. His persisting intractability, amply on display in his May 20 press conference with President Barack Obama and in his unctuous speech to the Congress four days later, bodes ill not only for the peace process but also for Israeli security in the long run.  Sadly, neither Netanyahu nor many members of Congress seem to understand that.

Whether Obama’s call for a return to the 1967 borders as the basis for a peace settlement was injudicious or intentionally provocative, Netanyahu offered no proposal for a framework that might end the conflict. Instead of presenting a new initiative, which he was urged to do by Minister of Defense Ehud Barak, Tzipi Livni, leader of the centrist Kadima Party, and presumably others, Netanyahu, true to form, defiantly dismissed the 1967 boundaries as being indefensible and unrealistic, even though previous Israeli leaders, most recently Ehud Olmert, have accepted that boundary as the baseline for negotiations, adjusted for territorial swaps.

Lecturing Obama as if he were an incorrigible student, Netanyahu summarily rejected any right of return for Palestinians, which is an improbable outcome in any event, and negotiations with any entity that included Hamas, an organization hostile to Israel with which President Mahmoud Abbas, having given up on negotiations with Netanyahu, has recently mended fences in the interest of presenting a unified Palestinian face to the United Nations. Netanyahu made clear what he opposed, but he never proposed an alternative.

Far from outraged by the prime minister’s incivility, the Washington Post chastised Obama the next day for unnecessarily provoking Netanyahu by unrealistically calling for a return to the 1967 boundaries. Members of Congress who conflate Israel’s interests with America’s were even more miffed by the president’s performance. Eager to exploit Obama’s perceived gaffe, Senator Orrin Hatch (R-Utah) and his Republican colleagues plan to introduce a resolution condemning Obama for “rewarding those who threaten Israel’s very right to exist.” Not to be outdone in the competition for campaign contributions, Senator Harry Reid (D-AZ), Congressman Steny Hoyer (D-MD), and other Democrats quickly distanced themselves from the president. No one in either party mentioned the 1500 new Israeli settlement units in Jerusalem that were authorized the very day of the Natanyahu-Obama meeting, the humiliation the relentless absorption of Palestinian land inflicts on Abbas, Netanyahu’s preferred interlocutor, and its corrosive effect on the peace talks.

Netanyahu and his nationalistic coalition partners seem to believe that they can continue to count on the US to champion their interests in the conflict with the Palestinians even if they refuse to make concessions. But the reality is that US influence in the Middle East is fading. The US and its European allies have played an inconsequential role in the democratization movement that promises to reshape the Middle East and North Africa. To be sure, many youthful demonstrators were critical of the US for its lack of overt support. Others see it as an accomplice to decades of authoritarian rule.

Whether the transformation we are witnessing ultimately results in democracy or intensified jihadism, the Arab world is taking charge of its own destiny. Having succeeded in removing autocrats in Egypt and Tunisia, and poised to do the same in Libya, Yemen, and Syria, it is only a matter of time before the Arab masses take up the plight of the Palestinians and their 44-year-old struggle for freedom and dignity. The recent demonstrations that took place on Israel’s borders with Syria and Lebanon are a taste of what is to come, except the numbers will be in the thousands rather than the hundreds, which means it could spin out of control.

Netanyahu and the Israeli right also fail to see that the rise of people power in the Arab world is altering the calculus of US interests. The US has already extended $1 billion of debt relief and another billion in loan guarantees to Egypt. In concert with its G8 partners, it has approved $20 billion in aid to Egypt and Tunisia. Assuming these countries and others struggling to end decades of dictatorial rule adopt political and economic reforms and do not fall prey to a new generation of tyrants or radical Islam, Israel will no longer be the region’s only democracy. The US will not easily be able to ignore the pleas for assistance from the Arab street and political modernizers without sullying its own historical commitment to popular sovereignty. While it will continue to defend Israeli security, it is likely to exert greater political pressure on Tel Aviv as the democracy movement gains traction to reach a political settlement with the Palestinians lest the persisting stalemate will further inflame Arab passions, deflect attention from political and economic modernization, and nurture the destructive aims of militant Islam.

Netanyahu and others on the Israeli right will instinctively balk at American pressure. From their perspective, it would not be in Israel’s interest to make concessions in such a fluid and uncertain environment. American legislators should take note of Israeli interessenpolitik and explain that US interests must also be taken into account. In addition to continued access to energy resources, they include support for democratic movements and the development of a politically stable Middle East, both of which will be advanced by an Israeli-Palestinian peace accord.