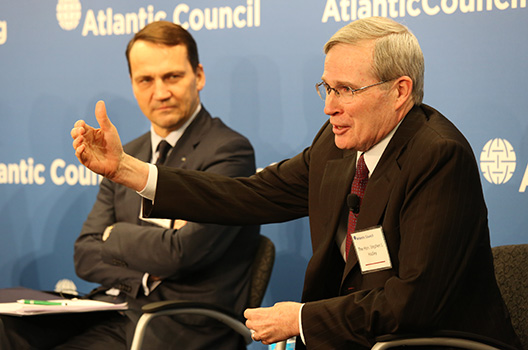 The US and Europe need to be more "forceful than we have been in meeting the challenge that Russian policy poses,” said Stephen J. Hadley (right), who served as National Security Adviser in the George W. Bush administration. Radoslaw Sikorski (left), the Speaker of Poland’s lower house of parliament, said he agreed with Hadley’s philosophy that it is “weakness that provokes and strength that deters.” (imagelink.com/denniskan)

The United States and Europe need to take a more forceful stand against Russian President Vladimir Putin to convince him that his strategy of fomenting unrest in Ukraine is not going to succeed, Stephen J. Hadley, who served as National Security Advisor in the George W. Bush administration, said on January 30.

“The formula we have to do is, we have to be much more active and forceful than we have been in meeting the challenge that Russian policy poses and to convince President Putin that his strategy is going to fail and puts him and his position at risk, and we need to do that in Ukraine now,” Hadley said at the “Toward a Transatlantic Strategy for Europe’s East” conference hosted by the Atlantic Council and the Embassy of Latvia.

Hadley said he was not looking for a confrontation with Russia, but is worried that if Putin succeeds in Ukraine and tries something similar in the Baltic States there is a risk of either starting a war with Russia or undermining NATO’s Article 5, which states that an armed attack against one member is an attack against all and sets in motion the possibility of collective self-defense.

“Either of those outcomes is a bad choice,” he added.

Hadley said Western policy should aim to convince Putin to be willing to contemplate an outcome on Ukraine that avoids the redivision of Europe and allows Ukrainians to move West in a way that does not destroy traditional economic ties between Ukraine and Russia.

As part of this approach, the US and NATO troops should have a permanent presence in the Baltics; provide arms to Ukraine and other countries that are threatened by Russian subversion in order to “raise the cost” for Russia; strengthen Ukraine’s economy; and make it clear to Putin that “frozen conflicts” will not block countries ultimately becoming part of the EU, said Hadley.

Hadley acknowledged that this strategy is risky and people may even say that it will provoke Putin. “The problem is he hasn’t needed our provocations to pursue a policy that threatens our interests,” he added.

US Secretary of State John F. Kerry will travel to Ukraine next week to express US support for the government in Kyiv as separatist forces in Ukraine have made gains in recent weeks that threaten the chances of reviving a peace deal brokered in Belarus’ capital Minsk in September.

Kerry said the separatists’ new offensive has been “aided and abetted by Russia’s irresponsible and dangerous decision to resupply them in recent weeks with hundreds of new pieces of advanced weaponry, including rocket systems, heavy artillery, tanks, armored vehicles, in addition to continuing operational command and control.”

The US and European Union have responded with economic sanctions to Russia’s annexation of Crimea last year and ongoing meddling in eastern Ukraine. EU foreign ministers on January 29 extended these sanctions on Russia by another six months. US officials have said they will tighten their own sanctions.

“We face the prospect of either having to accept Russia’s rules or live in a world of no rules,” said Radoslaw Sikorski, the Speaker of Poland’s lower house of parliament, told the meeting at the Atlantic Council.

Sikorski defended earlier efforts by the Obama administration and countries like Poland to “reset” relations with Russia.

“It was all going pretty well until President Putin decided to change course,” he said.

Sikorski said he agreed with Hadley’s philosophy that it is “weakness that provokes and strength that deters.”

“Our problem for the last several years has been that we didn’t believe that [the Russians] really can mean what they are saying. Well it’s time to realize that they do, and it’s time for leadership on our side,” he said.

Damon Wilson, Executive Vice President of the Atlantic Council who moderated the discussion, noted that the Obama administration and US Congress are in the middle of a rethink about the Russia policy.

“We have been wanting to hand this baton off to Europe and say the ‘Eastern Partnership is your game’ … and essentially take a back seat,” said Wilson who asked what role the US has in this eastern policy.

Sikorski said the credibility of the US, which is a signatory to the Budapest Memorandum on Security Assurances, is at stake. Under the memorandum, Ukraine gave up its nuclear stockpile in return for a guarantee of its independence and territorial integrity.

Developments in Ukraine send a “terrible signal” to Iran and North Korea that “you cannot trust an undertaking when you give up your nuclear ambitions,” said Sikorski.

US allies and friends are watching what happens in Europe and “this challenge to the world of rules,” he said.

“If the United States does not provide leadership in Europe there will be consequences in Asia as well,” he added.