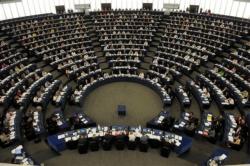 Last week’s approval of the SWIFT agreement demonstrates Parliament’s implementation of the “co-decision” powers granted by last December’s Lisbon Treaty. But what does its new status really mean?

Several MEPs provided their takes to the BBC.

Diana Wallis from the U.K. believes,

[T]he European Parliament has clearly been the big winner, with new powers as co-legislator. The [European] Commission now applies equal treatment in terms of access to information and participation to member states and the European Parliament…The [European] Council [now] has to accept its position as a European co-legislator and step out into the glare of transparency – admitting that its officials and politicians are lobbied in the EU legislative process. The Council must now join the joint register of lobbyists of Commission and Parliament, instead of refusing point-blank to participate. This would be a real advance for European democracy.

Lothar Bisky of Germany is not so positive-minded, saying the increased chatter within the Parliament about its greater role in decision-making is “just that: talk.” He goes on,

Parliament is actually not acting on its supposed new powers. Of course it has flexed its muscles to bring about some positive results, such as the rejection of the Swift agreement in February. But in the new vote on Swift [on 8 July] it has certainly shown its unwillingness to defend European citizens. Whichever role the European Parliament plays depends very much on how closely and efficiently it co-operates with the other EU institutions. Without question, deals are being made behind the scenes. There are both advantages and drawbacks to this. If too many deals are being made behind closed doors it is a threat to transparency and democracy. Nevertheless, behind-the-scenes deals sometimes allow for greater efficiency in parliamentary work – as long as it’s a balanced deal between equal partners and not a master/servant relationship.

Poland’s Danuta Huebner says that in theory the Parliament is more powerful under the Lisbon Treaty than its predecessor, the Nice Treaty. But the power may be more symbolic than practical.

The problem is that the strength of each institution [within the EU] depends also on the quality of inter-institutional co-operation. Those parliamentarians who believe that our strength comes from the weakness of other institutions are wrong. I am also afraid that some of the political groups put too much emphasis on ideology. Today we need first of all pragmatic solutions, based on a Community approach.

While Germany’s Rebecca Harms believes the European Parliament is more powerfully under Lisbon, its role needs to be further defined.

Under the treaties MEPs are more powerful now, but we still have to develop and fight for our role. In the Swift debate MEPs showed that the parliament can even stop an international negotiation on such a matter. But in the end MEPs behaved surprisingly weakly – in the second-round vote there wasn’t really a discussion of the compromise. Parliament is learning that it has new power, but it’s not really fit to use it yet, not really able to stand up to pressure from the Council.

European Parliament is fulfilling its role as a co-legislator on financial regulation, but according to French MEP Pervenche Beres must be more involved in solving economic and social crises.

I deplore the European Parliament’s lack of involvement in drafting the EU’s 2020 strategy and in the current discussions on enhanced economic governance – even though Article 121-6 of the Lisbon Treaty grants Parliament co-decision powers. Despite the new powers it has won with the Lisbon Treaty, Parliament still has to fight for its prerogatives against the Commission and Council. But it also has to act as a mature institution. It must ensure that it doesn’t undermine its own powers by giving in to pressure and agreeing to informal deals before the democratic debate has truly taken place.

A common thread among is that the European Parliament must, as MEP Beres puts it, “fight for its prerogatives against the Commission and Council.”

For the European bureaucracy to function effectively, the new and more prominent role of the Parliament must be accepted by the Council and Commission. Parliament and Council must act as equal co-legislators, with the former representing the people and the latter representing the 27 constituent nation-states. More importantly, it seems, the MEPs must assert and insist upon their rightful (amended) role in the process.