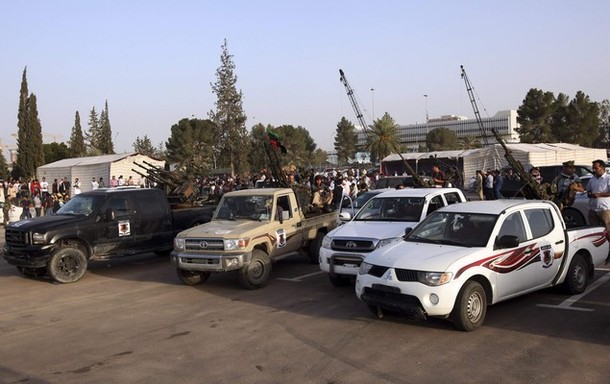 This morning’s clashes between members of the Tarhouna militia and the Zintani militia at Tripoli’s main airport demonstrate just how unstable Libya’s security situation really is.

This new breakdown in security further jeopardizes Libya’s attempted democratic transition and continues a months-long pattern of violence and insecurity that the National Transitional Council (NTC) and interim government have been unable to control. Southern Libya remains as lawless as it was during major tribal clashes between Arab groups and the non-Arab Tebu tribes back in February. Many of these southern tribes and extended family clans are also engaged in drug smuggling and human trafficking, taking advantage of Libya’s long and porous southern border with Chad. Many of these clashes are the result of feuds over control of the drug and trafficking trade turning the south into a mafia haven.

Meanwhile, the NTC has been preparing to hold a national election for a constituent assembly on June 19 that will most likely now be postponed. Reports have been circulating for weeks that NTC head Mustafa Abdul Jalil had been considering delaying elections, first with speculation that he was considering sacking interim Prime Minister Abdurrahim el-Keib and his government, and most recently confirmed with statements from Jalil himself. Unconfirmed reports indicate that the NTC had already decided to postpone the election to either July 10th or 15th before today’s unfortunate developments but has not yet gone public with an announcement over concern for public reaction. Today’s violence may necessitate a postponement past mid-July, which would further enflame public sentiment and the suspicion that the NTC is simply trying to hold on to power.

The NTC’s public profile has suffered tremendously over the past several months, and particularly within the last month. Several new laws passed by the Council have alarmed both international and Libyan NGOs and rights groups. The new laws place troubling restrictions on press and speech freedoms, including a ban on media discussing religious fatwas issued by the National Council of Islamic Jurisprudence, and any speech that “glorifies” the former Qaddafi regime or propaganda that endangers the revolution. Rights groups see this as an attempt by the NTC to silence the increasing amount of criticism over its suspect governing practices and inability to provide effective law and order for the country. The council also passed a law banning foreign funding of local NGOs with additional registration and travel restrictions placed on foreign NGO workers based in Libya.

After today’s battle between the Tarhouna and the Zintanis, the interim government will now most likely step in to mediate a solution. However, these events demonstrate the ultimate weakness of the NTC and the interim government moving forward. Despite having possibly gained another two weeks to prepare for the national election, the government’s inability to prevent insecurity, rather than simply deal with its aftermath, puts the legitimacy of the upcoming election in danger. The security situation is unlikely to get better in the next four to six weeks, increasing the likelihood that international observers may not be able to monitor the election effectively, if at all.

The renewed volatility in Tripoli demonstrates the damage that can and will continue to occur in the absence of further engagement by the US and its European allies, who have so far decided to maintain a very light footprint in the wake of the NATO intervention. However, the transatlantic community will need to think seriously about how they can re-engage with Libya to help its government reestablish security so the transitional process toward democracy can move forward. A continued lack of political support and or security assistance in some form could help tilt the country closer toward becoming a failed state or a renewed autocracy; an outcome for which the transatlantic community would shoulder most of the blame.