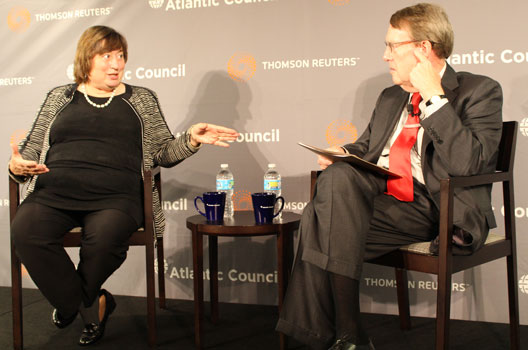 Developing countries are failing to meet fiscal transparency standards as established by the United States, according to a report released on July 28.

In the 2016 report, sixty-four countries failed to meet the minimum standards. Of those, only eight showed significant progress.

In advance of the report’s release, a top State Department official reiterated commitment to fiscal transparency and detailed several new initiatives in that field.

“Transparency is…the cornerstone of sustainable economic growth, and creates the best possible condition for entrepreneurs to create new innovative industries,” said Catherine Novelli, the undersecretary for Economic Growth, Energy, and the Environment at the US State Department.

Novelli spoke at the Atlantic Council on July 20 in Washington at an event hosted by the Council’s Global Business and Economic Program and Thomson Reuters as a part of the Council’s Power of Transparency Speaker Series. Following her remarks, John Walcott, foreign policy and national security editor at Thomson Reuters, moderated a discussion.

The State Department’s minimum transparency standards reflect the completeness, reliability, and availability of budget documents and the transparency behind natural resource extraction and licensing. These standards are not static: each year, they may be updated and strengthened.

As a result, the report notes: “Some governments may fall short of these requirements, despite in some cases maintaining or even improving their overall level of fiscal transparency.”

Novelli described an initiative that helps governments set up online business registration portals: “In countries like Haiti, the process of starting a business is onerous and stifles development.”

“The process [in Haiti] is so complicated that entrepreneurs need third-party attorneys and notaries to navigate it. Capital that could cover start-up costs get diverted to pay attorney’s fees,” said Novelli.

“[We are] helping governments set up one-stop shops with online platforms, to make it easier for entrepreneurs to start businesses,” she added.

BIDS—which was created in 2012—hosts over eight-hundred potential business investment opportunities across dozens of countries with an estimated total commercial value of over $300 billion.

To promote transparency in the extractive sector, the US is using the Extractive Industries Transparency Initiative (EITI) in partnership with industry and civil society to publish information on government management of these sectors. The publication of this information, noted Novelli, should help stimulate more efficient use of resources and stem corruption.

“It has really created an opportunity for citizens to see what is happening in their government and then have a voice,” she contended.

Despite these new initiatives, Novelli acknowledged that some countries are slipping behind.

“Many governments are still failing to make progress, and some, unfortunately, are moving backwards,” she said.

Nathaniel Rome is an intern with the Atlantic Council’s Global Business & Economics Program.

Image: From left: Catherine Novelli, undersecretary at the US Department of State and John Walcott, foreign affairs and national security editor with Reuters discuss the State Department’s efforts to promote growth through transparency. (Atlantic Council/Nathaniel Rome)