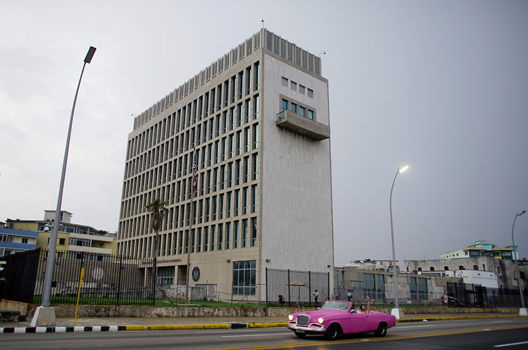 Actions by US President Donald J. Trump’s administration, namely his November 8 announcement of further sanctions and travel restrictions on Cuba, have created a geopolitical vacuum, leaving the door open for US adversaries to reassert influence over one of the United States’ closest neighbors.

Further measures which have ratcheted up tensions between Washington and Havana in recent weeks include the withdrawal of all non-essential US diplomats from Havana after they reported mysterious ailments, the expulsion of fifteen Cuban diplomats from the United States, and the vote against the United Nations (UN) annual resolution condemning the US embargo.

There is a very real danger that US disengagement from Cuba will allow international players like Russia and Venezuela to once again become the dominant foreign powers in Cuba, and promote foreign policy agendas counter to US interests. Further, this retreat from former US President Barack Obama’s policy of renewing US relations with Cuba could also severely unbalance the flow of resources to the island, thereby deepening social and economic gaps, and ultimately reinforcing the revolutionary government’s claims that inequalities are exclusively caused by capitalist systems. Such an outcome would leave Cuba vulnerable to alternative influences, which is especially dangerous with Havana’s upcoming leadership transitions in municipal legislatures, the National Assembly, and the presidency over the next four months.

Antagonism within Cuba for the latest snubs from the White House may push the Cuban Communist Party to elect a less moderate, hard-liner as president less willing to compromise with the United States.

In his first address to the United Nations General Assembly in September, Trump reaffirmed his administration’s commitment to maintaining economic and political pressure on the communist regime in Cuba until “fundamental reforms,” thus far unidentified, are undertaken. This message was once again echoed by US Ambassador to the United Nations Nikki Haley following the UN vote to condemn the embargo, and again in the imposition of new US restrictions on Cuba. Although none truly enumerated the reforms that the Trump administration wants to see, they reiterated that the ultimate goal in pursuing a harder policy toward Cuba is to restore democracy and ensure a prosperous future for the Cuban people.

As laudable as the goal may be, the administration’s apparent preference for disengagement and isolation works against its ultimate purpose—a free Cuba. This is not just because such methods have proven unsuccessful over the last half century, but also because they overlook the deep existing financial connections between Cuban and Cuban-American families that perpetuate social divisions in Cuban society and bolster the communist party. Furthermore, the absence of a US presence on the island has left an economic gap that Russia—and to a much smaller extent, China and Venezuela, who have maintained their existing trade levels—have already begun to fill. Neither of these outcomes is good for US interests or US national security as Cuba prepares for its presidential elections on February 24, 2018. If Cuba senses that its economic future lies away from the United States, then the Communist Party may appoint a president who is all too willing to embrace other partners.

In the case of remittances from Cuban-Americans to their families in Cuba, for example, which are currently estimated at about $3 billion a year, those funds have been central to financing Cuba’s burgeoning private sector. They provide the capital needed to start restaurants, casas particulares, and other ventures that are permitted by the Cuban government, allowing these Cubans the opportunities that a democratic, capitalist society offers. However, this capital is not evenly distributed to all Cubans who wish to enter the private sector, since the money largely comes from the wealthy, white Cuban families that live in Florida and its recipients tend to be white family members back in on the island.

Meanwhile, black and poor Cubans without access to remittances continue to depend on either the Cuban government or the extremely limited opportunities that exist for Cubans of color in the island’s relatively lucrative tourism industry.

It is true that anyone in Cuba can open his or her own business if they have the means. However, access to the “means” of starting an independent business creates a tall barrier for black Cubans whose only source of income is typically just enough to live on.

This pattern has created inequalities that the Cuban revolution had initially promised to address. Over the past decade, as Cuban President Raúl Castro has allowed greater privatization and entrepreneurship, new class differences have emerged between those able to take part in the private economy and those who continue to work in government-supported industries, such as education and health. This divide has only sharpened as the private sector continues to grow.

If this inequality gap worsens, poorer Cubans will turn back to the communist regime for assistance, hurting the chances that public demand will spur change. At the very least and albeit imperfectly, communism made progress in balancing the scales for women and Cubans of color.

However, in larger terms, the disappearance of the small, but growing US economic presence on the island due to the renewed travel restrictions is driving Cuban officials to look elsewhere to stimulate economic growth. Countries like Russia, who see the strategic value of the island nation less than one hundred miles off the United States’ southern coast as an ally not politically aligned with the United States, have already strengthened ties. Just in the last two weeks, the Russian steel giant, YUMZ, signed a $30 million steel production deal with the Cuban state-owned steel company, ACINOX. In addition, earlier this year, Rosneft, the largest Russian energy company, was granted drilling rights in Cuban territory. In total, Russia’s trade with Cuba increased 73 percent in the first six months of 2017 alone.

Meanwhile, the new restrictions outlined on November 8 prohibit US companies from getting involved on the ground floor of Cuba’s growing private economy. US businesses are now prohibited from investing in the special development zone in the Port of Mariel where non-US, multi-national companies find substantial opportunities. Restricting US economic activity in Cuba hurts both US economic and geopolitical interests by leaving the door open for key competitors to establish strong presences right off the US coast.

Thus, by allowing US citizens and companies to invest in Cuba—regardless of personal affiliation—and by permitting US citizens to travel to Cuba and spend their tourist dollars at entrepreneur-owned businesses, a broader swath of Cuban society could shift into a more privatized economy. This would direct the income flow to entrepreneurs, countering the influence of US adversaries in the country, and realizing the potential of a free, democratic Cuba.

If the Trump administration truly seeks a free, democratic Cuba, only a policy promoting engagement that allows all Cubans the opportunity to build new, more prosperous lives will be effective in showing Cubans the promise of change.

Nicole M. Wadley is an intern with the Adrienne Arsht Latin America Center with the Atlantic Council. You can follow her on Twitter @nikkiwadley4.

Image: A car with tourists drove past the US Embassy in Havana, Cuba, on October 24. (Reuters/Alexandre Meneghini)