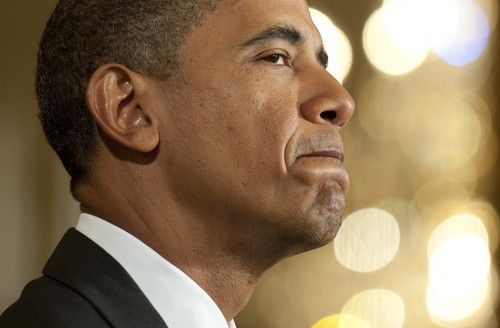 U.S. President Barack Obama’s reset button for a new America as the shining beacon on the hill for the rest of the world to look up to is jammed. And the prophets of doom and gloom are soaring. Recent samples:

— "The world isn’t too much with us. We have left the planet. As we race toward the midterm elections, our political conversation has devolved beyond the silly to the absurd … Farce has become the new reality," says columnist Kathleen Parker.

— With millions of viewers daily, the $30 million a year Fox News Channel doomster Glenn Beck, "worries that the end, doomsday, is coming soon, and it won’t be pretty. (Which is why he opposes Obama spending on infrastructure projects, after all, why bother?) His worries about a violent national collapse have even attracted survivalist advertisers on his daily show. One of them touts a "Survival Seed Bank" in case "the politicians and the bankers bring the whole thing crashing down," writes Al Kamen.

— Wall Street’s 35 major financial companies, evidently oblivious to the plight of main street and 10 percent unemployment, will hand out $144 billion in executive bonuses this December — 5 percent increase over last year and a record for what billionaire philanthropist Pete Petersen calls "carnivorous and animalistic capitalism."

— The subprime mortgage scandal that triggered a global collapse has spawned the foreclosure scandal, the work of "robo-signers" who authorized countless thousands of documents without proper review. The latest foreclosure scandal is a multibillion-dollar boondoggle.

— Right out of central casting for a Wall Street buccaneer, Angelo Mozilo, the former head of Countrywide Financial Corp., won’t have to pay the $67.5 million in penalties for civil fraud and insider trading. Bank of America bought Countrywide and Mozilo’s old contract says the company pays all such penalties — even though he’s banned for life for serving as officer or director of a public company.

— An estimated 9,000 Iraq and Afghan vets are homeless on the streets of America. A quarter of a million out of 2 million Iraq and Afghan vets have asked for psychiatric help. Holly Petraeus, wife of Afghan commander U.S. Army Gen. David H. Petraeus, directs BBB Military Line, a Better Business Bureau program that provides advocacy services for military families. Many military veterans are losing their security clearances due to heavy debt.

— "The public might not love Sarah Palin. But by 2012, Americans might absolutely despise Obama. Two more years of a bad economy and an unpopular Afghan war, and anything is possible. Yes, there’s a ceiling to Palin’s support. But in 2012, there also will be a ceiling to Obama’s. Whose will be higher?" Matthew Continetti, Weekly Standard.

— Taliban insurgency leader Mullah Omar made clear no Afghan peace deal is possible without Pakistan and its Inter-Services Intelligence agency, which spells doom for U.S. peace overtures with Taliban dissidents.

— In a major effort to bomb Taliban to peace talks, drones have flown 21,000 sorties so far this year. Unfriendly persuaders didn’t work for the Soviets in their decade-long Afghan war. Nor for the United States in its 10-year Vietnam War. Bleeding the enemy isn’t a magic formula. It usually encourages him to fight harder.

— If Pakistan’s military continues its opposition to counterinsurgency operations in North Waziristan, where Afghan insurgent groups are sheltered, the National Security team has studied and OK’d for Obama’s approval plans for high-altitude bombing with B-2s and B-52s. Osama bin Laden eluded similar strikes against the Tora Bora mountain range in December 2001. Minority dissenters say this would create a state of war with Pakistan.

— No less than 3 million weapons have vanished from official depots in Pakistan’s Punjab province — from AK-47s to grenade launchers, grenades, handguns. Seized from criminals over the years, they were presumably resold to criminals and terrorists by corrupt officials.

— Iraq, seven months after elections, has beaten all records for longest time a country is deadlocked without a government. The temporary caretaker Shiite government discouraged thousands of the former 94,000-strong Sunni Awakening insurgency, once on the U.S. payroll, who have now quietly rejoined a revival of al-Qaida in Mesopotamia.

— Economic and financial scribes are beginning to see the United States trapped in the dark vision of the Japan syndrome — low growth, a downward spiral of prices, known as deflation. The optimists say "disruptive technology" and "creative destruction" will still save the day.

— Another war may produce both. Surrounded by Hezbollah supporters, Iran’s President Mahmoud Ahmadinejad shouted with a bullhorn in southern Lebanon, 2.5 miles from the Israeli border, "Your Zionist enemies of humanity are on their way to annihilation, humiliated and weak." Iran is now officially on Israel’s northern border. Fearful Arab leaders in the Persian Gulf believe the time is fast approaching when Iran’s suspected nuclear weapons facilities will have to be taken out.

— Obama may agree when he realizes his once magical poll numbers in the Arab world nosedived from 77 percent after his June 2009 Cairo Declaration to 20 percent. Only 16 percent are still hopeful about U.S. policies.

— Almost no one believes Israel plans to facilitate the creation of a Palestinian state in the West Bank. Jewish housing construction has resumed officially in East Jerusalem and below radar in many of the 141 West Bank settlements.

— NATO allies have cut defense spending to less than 2 percent of gross domestic product. With Europe’s strongest military, Britain is reducing its army by 20 percent, overall defense 12 percent. Member nations keep weakening the alliance to where it becomes meaningless.

— Al-Qaida’s new, slick online magazine "Inspire" spells out what NATO countries now have to face — homegrown terrorists. Trained in Pakistan’s tribal areas, they return to their homes in Europe "where you keep fighting until you achieve martyrdom. You start your day in this world, and by the end of it, you are with Allah."

— "Inspire" suggests ideas for terrorist attacks and offers advice on how to wage Jihad without generating scrutiny from law enforcement or intelligence agencies. One idea is to use a pickup truck as a mowing machine to plunge into a crowd of enemies of Allah. Just add steel blades to the front grill of the truck, then step on the gas.

Arnaud de Borchgrave, a member of the Atlantic Council, is a senior fellow at CSIS and Editor-at-Large at UPI. This article was syndicated by UPI. Photo Credit: Getty Images.