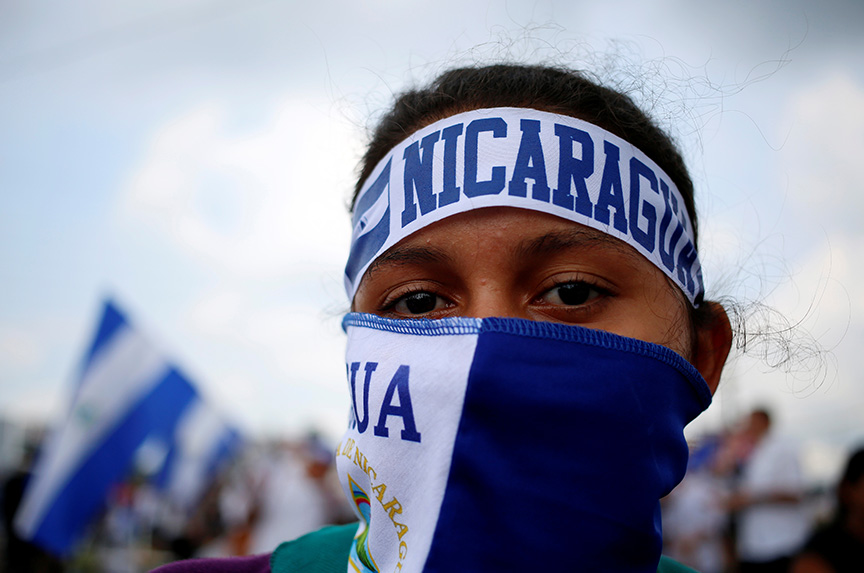 It has been more than a month since protests erupted in Nicaragua against President Daniel Ortega. At least seventy-six people have been killed and more than 800 injured, according to the Inter-American Commission on Human Rights (CIDH). Experiencing its largest political awakening since Ortega took office in 2007 and gradually eliminated the democratic system of checks and balances, Nicaragua is at an inflection point that represents its best chance to finally return to a full democracy.

The protests erupted after the Ortega government announced a social security overhaul that would increase pension contributions for workers and employers while reducing the benefits. A longstanding tacit agreement between Ortega and a large segment of Nicaraguans—particularly in the private sector—of tolerance of his authoritarianism in exchange for improvements in the quality of life has been gradually eroding due to government mismanagement of funds and dwindling assistance from Venezuela, which is in the midst of its own economic and humanitarian crisis.

Pension reform was the straw that broke the camel’s back in Nicaragua. Ortega called off the reform soon after the protests erupted, but the protests continued fueled by a widening set of anti-government grievances. In recent years, Ortega has taken control of the country’s courts, disqualified opposition candidates from running for office, removed twenty-eight opposition lawmakers from the National Assembly, eliminated term limits, and named his wife vice president of the country. In addition, protesters have withstood human rights abuses committed by the government’s security forces, with the CIDH finding evidence of “illegal and arbitrary detentions, torture, cruel, inhuman and degrading treatment, censure and attacks against the press, and other forms of intimidation.”

The government and the opposition have attempted dialogue, with the Catholic Church taking on a leadership role within the opposition. Talks began on May 16 with the participation of representatives from the government, the church, the private sector, a coalition of university students, and civil society. The dialogue, however, broke down on May 23 with the government rejecting the forty-point agenda presented by the bishops of the Catholic Church. This agenda proposed electoral law reform, early elections, and prohibiting presidential reelection. Ortega’s foreign minister called it a “roadmap to a coup d’etat,” despite the opposition’s underlying demand being a return to a full democracy that represents the will of the people. Protesters have since returned to the streets to force Ortega’s hand.

At this point, there are three possible ways forward: Ortega and his wife, Rosario Murillo, resign; a democratic consensus is reached through dialogue; or Ortega holds on to power through increased repression and violence. While most opposition groups support the bishops’ agenda, student leaders have continued to call for Ortega’s immediate resignation.

The option that would produce the most stability, though unlikely at the moment, is that a democratic consensus is reached between the government and the opposition to end Ortega’s undemocratic consolidation of power and restore democratic checks and balances. Such an agreement would be best for achieving an orderly transition of power through early, free, and fair elections (rather than wait until scheduled elections in 2021), as Nicaraguans’ increasing disdain for Ortega would likely result in an electoral victory for the opposition.

The United States could help push for such an agreement through additional targeted sanctions on high-ranking members of the FSLN, electoral council magistrates, and government leadership. Government officials like Roberto Rivas, president of Nicaragua’s electoral council, are already the target of US sanctions.

The Ortega government, however, has not shown any sign of relinquishing power. If the national dialogue is not soon restarted the situation will further deteriorate and government-sponsored violence toward protesters will continue and likely worsen. Although the Nicaraguan army has announced that it will not take part in the repression of peaceful protesters, pro-government paramilitary and police forces will likely not follow suit.

What happens next in Nicaragua will also have implications for its Central American neighbors and Latin America as a whole. A further escalation could have humanitarian effects and hasten a migration flow into countries of the Northern Triangle—El Salvador, Guatemala, and Honduras—which already face their own institutional challenges posed by migrant returnees and are in no position to absorb an increased number of migrants.

If Ortega were to resign, this could have geopolitical impacts as Venezuelan President Nicolás Maduro would lose one of his few remaining allies, further isolating Venezuela.

Nicaragua is experiencing its largest popular mobilization since the civil war ended more than thirty years ago. Its people will likely not be deterred until they recover their democratic rights. Regardless of how the coming days unfold, it is imperative that the government end the violence against peaceful protesters. Despite what the government claims, Nicaraguans are not demanding a coup. They want their rightful claim to live in a democracy.

Juan Felipe Celia is an assistant director in the Adrienne Arsht Latin America Center. Follow him on Twitter @jfcelia.

Image: A masked protester takes part in a demonstration against Nicaraguan President Daniel Ortega's government in Managua, Nicaragua, on May 19. (Reuters/Oswaldo Rivas)