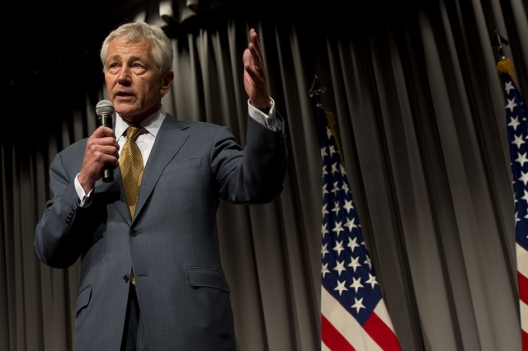 The United States must fundamentally rethink its defense strategy in light of major changes in both funding and the security challenges we face in the world.

The Pentagon’s Quadrennial Defense Review is just beginning. This strategic review must offer the president and Congress a clear-eyed assessment of the capabilities the nation cannot do without, the luxuries it can, and which risks it must accept in light of fiscal and strategic realities and uncertainties.

As Defense Secretary Chuck Hagel announced last month, the Pentagon is grappling with continuing major budget cuts of roughly $500 billion over the next decade if sequestration continues unabated.

There also are major uncertain security challenges looming. Some are driven by new geopolitical developments — e.g., the possibility of a China-Japan conflict over disputed maritime territories, or spillover from the Syrian civil war destabilizing the region. Others are being propelled by dramatic changes in technologies that are putting threatening new military capabilities in the hands of small groups and individuals. We live in an age of disruptive technological change, which means the chances of a military surprise — think swarming drone attacks on our fleets or bioterror attacks in our cities — are increasing quickly.

All this means that we need a real strategy-driven review at the DoD, not an exercise that jumps right to program and cost analyses to produce more incremental change. Real strategy options that include fundamentally re-examining the missions and mix of US military forces are essential.

US ground forces have grown since 2001 and are now being pared back toward 2001 levels. These planned cuts — much less the substantially larger ones being floated by Hagel and other Pentagon leaders to meet sequestration targets — come with substantial risks. While the 2000-level force was more than adequate to invade Iraq while fighting the Taliban and al-Qaida in Afghanistan, even the expanded force was too small to achieve the assigned political objectives.

While the wars in Iraq and Afghanistan are over and winding down, respectively, major instability looms in the Middle East and Asia. Syria, Iran and North Korea are obvious flashpoints that might require a US response — and we frequently fight wars in places that seemed unlikely beforehand. A smaller ground capability limits our options.

But the risk of not making major cuts is even greater. Projected increases in personnel and overhead costs are unsustainable and, if not checked, will greatly erode our combat effectiveness.

The Pentagon needs to stop talking about how important it is to get a handle on burgeoning costs — of excessive infrastructure, bloated and redundant headquarters, and skyrocketing health care, military compensation and retirement benefits — and do something about it. Otherwise, continuing increases in such costs will force us to pare back force levels to dangerously low numbers, or field a hollow force that is inadequately trained and equipped.

Without massive reforms, even a 2000-level force would be much more expensive now than it was then. Manpower costs, including pensions and health care for retirees, account for nearly half of the defense budget, and the Army chief of staff, Gen. Ray Odierno, forecasts that 80 percent will go to compensation by 2023 unless we fix the problem.

Hagel’s proposed 20 percent cuts in Pentagon and combatant command staff between 2015 and 2019 is both a strong symbolic gesture and a good start toward ending the enormous headquarters bloat. Recent suggestions to consolidate military command staffs in North and South America, and in Europe and Africa, make sense.

But much more must be done. The military services’ component command staffs in each of the combatant commands also should be reduced significantly. The war plans should continue to be reviewed with an eye toward new concepts of operation that leverage US military advantages and give allies greater roles in their own self-defense. The US military’s undisciplined and far-flung cooperative efforts with allies and partners should be scaled back and given real focus. The US should seek to leverage new partners, including China, where it makes sense to do so (e.g., helping patrol the sea lanes in the Middle East and the Indian Ocean).

These are times of immense change in the world and in the economy. Incremental reviews and baby steps in our defense posture will no longer suffice.

Barry Pavel, vice president and director of the Brent Scowcroft Center on International Security, and a former senior director for defense policy and strategy on the National Security Council; and James Joyner, an associate professor of security studies at the Marine Corps Command and Staff College and a nonresident senior fellow at the Atlantic Council. These views are their own.

Image: Secretary of Defense Hagel speaks to DoD employees at the Mark Center in Alexandria, VA, May 14, 2013 (Photo: Flickr/DoD/Erin A. Kirk-Cuomo/CC License)