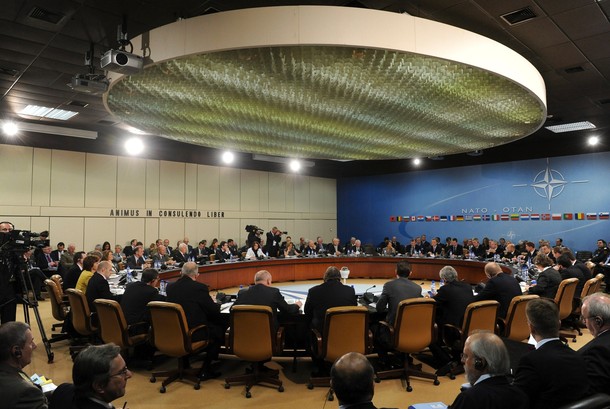 When U.S. Secretary of Defense Robert Gates meets with our 27 Allies this week, it will be no ordinary affair. Their focus this week: Libya, Afghanistan, and historic reform at NATO itself. It’s the first time all of NATO‘s Defense Ministers will meet since the 28 Leaders of the Alliance set forth in November at the NATO Summit in Lisbon a bold vision for NATO in a new Strategic Concept – one focused on 21st century security challenges.  Secretary Gates and the Allies will discuss events in the Middle East and North Africa, transition in Afghanistan, and NATO’s transformation.

Libya will of course top of their agenda. You’ve read the news; this week will be a prime opportunity for Defense Ministers to consult on events unfolding in NATO’s immediate neighborhood. As President Obama has said, we are looking at the “full range of options … not just here in the United States within our own agencies,” but also “in consultation with NATO.” That is precisely what Secretary Gates will do this week – looking at ways in which NATO might help to address the evolving crisis and its consequences.

Turning to Afghanistan, we are entering a new phase in our mission for the NATO-led International Security Assistance Force (ISAF).  In November, ISAF Leaders determined that transition to Afghan lead for security was on track to begin in early 2011. They also affirmed their support for President Karzai’s objective for Afghan National Security Forces to lead and conduct security operations throughout the country by the end of 2014.  Now, ISAF defense ministers will add more detail to these plans, to include agreeing to the key principles that will undergird transition as we move forward in step with the Afghans. Representatives from 49 countries – all NATO Allies and 21 countries that partner with NATO in its Afghanistan mission – will meet on Friday to discuss transition, as well as NATO’s enduring partnership with Afghanistan.

Finally, Defense Ministers will discuss NATO’s ongoing transformation. This includes reviewing progress on NATO’s most pressing capability needs, as laid out by Allied Leaders in Lisbon. They will also discuss the Alliance’s ongoing Posture Review, which is reviewing “NATO’s overall posture in deterring and defending against the full range of threats to the Alliance, taking into account changes in the evolving international security environment.” And they will consider how to deepen Allied and partner cooperation on multinational programs.

So, as you can see, a tremendously full agenda.  Stay tuned … in the world of NATO and transatlantic security, there is always more to follow!

Ivo H. Daalder is the U.S. Ambassador to the North Atlantic Treaty Organization.