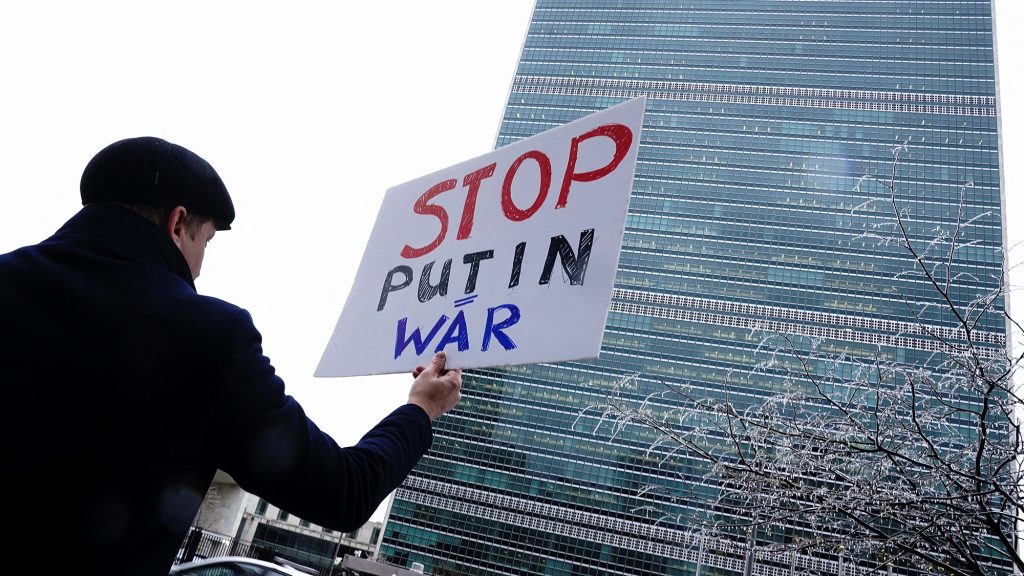 The Art of War, Sun Tzu’s military treatise drafted in fifth-century BC China, has never lost its salience. The imperative to know one’s enemy as well as oneself has been a common refrain in military academies and diplomatic training. Yet, this charter of battlefield strategies just gained renewed relevance in the context of Russia’s invasion of Ukraine.

Russian President Vladimir Putin offered his reasoning for the “special military operation” in a Monday speech littered with contrived grievances and a self-serving perversion of history. Putin’s address can only be characterized as unhinged and reminiscent of the worst Soviet-era propaganda in which white is black and the aggressor is a victim. He proclaimed the independence of Donetsk and Luhansk, regions in eastern Ukraine held by Kremlin-backed rebels. He negated Ukraine’s sovereignty, culture, and identity.

Then on Thursday, announcing the start of the invasion, he described Ukraine’s government as an illegitimate junta and the country’s turn away from Moscow since the Maidan square protests of 2014 as the outcome of a coup orchestrated by the West. If the world wasn’t staring at a great tragedy, Putin’s bizarre tone and awkward efforts to project (forced) consensus through a televised meeting of the country’s security council would have been stunning political theater.

Experts have been cautioning of a new Cold War for months. Russia’s military offensive marks the launch of an era vastly different from the security landscape of the second half of the twentieth century. The West must confront the ways in which it will be impacted.

Beyond Ukraine and NATO, Europe must be vigilant about the Kremlin’s growing influence in the Sahel and Latin America; and its use of cyberspace for interference, disinformation, and the manipulation of Western public opinion. Apart from the severe tremors already being felt across energy and financial markets and in international trade, Western Europe should brace itself for an inevitable rush of refugees.

For the most part, concerns about Moscow’s intentions (that are now confirmed) have until now fallen on deaf ears in Southern Europe, where Russia has traditionally enjoyed empathy. Without a history of direct confrontation with Russia, it has been easy for the region to hold onto romantic notions. This, despite a series of close historical parallels to the current crisis: the July Crisis of 1914 that led to World War I, Hitler’s occupation of the Sudetenland, the spheres of influence created by the Yalta Conference, the Cold War, and the Cuban Missile Crisis.

Most analyses of Russia’s behavior focus exclusively on Putin—what he thinks or wants, his temperament and personality. What’s missing is a more profound assessment of broader Russian society that decodes the social contract between citizens and the country’s autocratic leadership. Regardless of whether they agree with Putin’s description of the collapse of the Soviet Union as “the greatest geopolitical catastrophe of the twentieth century,” Russians share a nostalgia for their nation’s past greatness and global power.

So we must recognize the alternative reality that has come to characterize a significant percentage of Russian society, from its litany of grievances to the twisted perspective on historic events that guides Moscow’s willingness to disregard international law. It’s a feeling of being slighted that goes back all the way to Catherine the Great. As evidence, Russians point to the “inadequate” recognition of their role in defeating Nazi Germany. More recently, Russians often blame the country’s economic chaos of the 1990s to the West’s determination to “bring Moscow to its knees.” These views are, of course, not unanimous, and there is evidence of opposition to the current conflict—as seen in the antiwar protests that reportedly led to nearly 1,400 arrests across Russia on Thursday.

But this biased—when not totally false—retelling of history now has a foreign audience too, as Russia adeptly leverages tools like its gas and the bot armies that we see marching through social networks beyond its borders. Russia Today (RT), the country’s key, government-sponsored foreign (televised) weapon, is central to those goals, and its importance is unlikely to diminish as the Kremlin seeks to consolidate its malicious presence in other theaters, such as Africa and Latin America. Russia’s diplomatic advances in countries like Nicaragua, Venezuela, Cuba, Brazil, and Argentina—many of which have had complicated relations with the United States and, consequently, are particularly susceptible—has allowed it to embed military technical advisors there.

As for cyber warfare, the United States has long been worried about attacks on its critical infrastructure: US President Joe Biden and Putin even held a bilateral summit including discussions on this subject last June. We in Europe should take note. The virtual world bears the imprint of our free societies and holds the potential to empower people. However, it can also serve as the West’s Achilles’ heel. Too often, our cyber defense is woefully inadequate. Individual countries and the European Union (EU) need to shore up the security of companies and other organizations—especially those involved with critical infrastructure. The cyber defense of NATO—and of the West in general—is also paramount.

The Kremlin routinely cites the Iraq War and NATO’s intervention in Kosovo to counter questions about its violations of international law. Even though there’s no legitimate comparison between Kosovo and the Donbas (and Putin’s claims of a genocide in Donetsk and Luhansk are fabricated), “whataboutism” continues to define Russia’s official narrative and shape public opinion.

Amid what threatens to become an extended conflict in Ukraine, the West must be clear-eyed about its approach to Russia. Putin has attacked the very foundations of the European security order with an intent to demolish it. He aims to recreate a sphere of influence by turning Ukraine and Belarus into buffer states. There’s a real risk that the Baltic states, which are members of both NATO and the EU, could also get pulled into this crisis. We would be mistaken to follow in British Prime Minister Neville Chamberlain’s footsteps of appeasement from the 1930s, hoping that Putin’s ambition is limited to Europe. Ultimately, it is the international liberal order and its norms that he is after.

With recent attempts to constructively engage with Moscow failing, the West’s priority should be to strengthen its deterrence and defense, while building its resilience. It’s going to be needed. 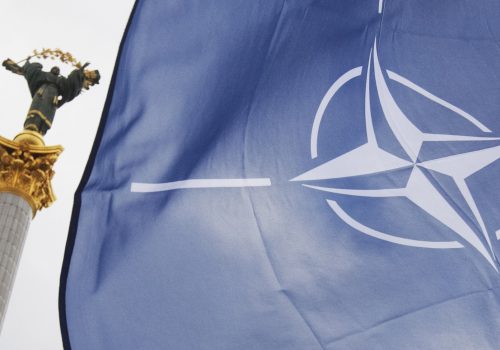 Why NATO will endure well beyond today’s crises

Russian President Vladimir Putin, in his efforts to destroy the liberal international order, has shaken the foundations of NATO. But this is a time for reinvigoration. 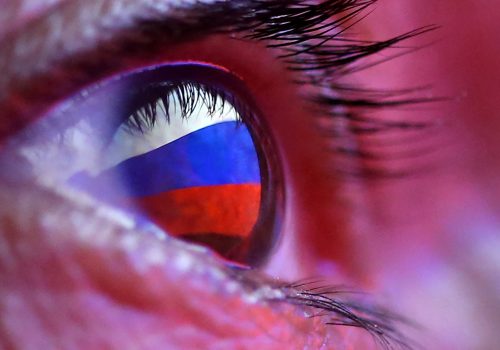 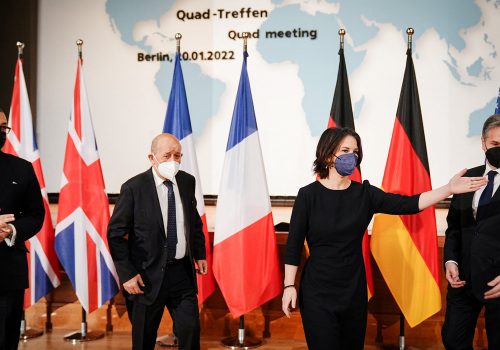 Image: A lone protester stands with a sign condemning Vladimir Putin across the street from UN headquarters in the Manhattan borough of New York City, New York, U.S. on February 25, 2022. Photo via REUTERS/Carlo Allegri.