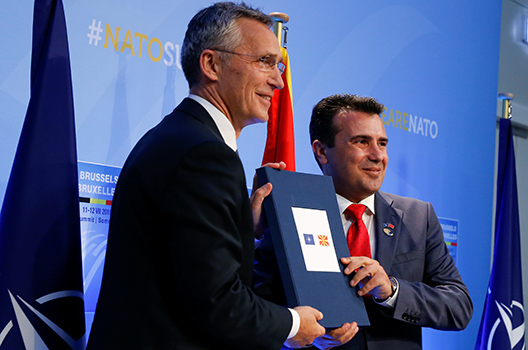 This piece originally was published in Macedonian in Sloboden Pecat on August 5 and in Albanian in Koha  on August 7 in anticipation of the September 30 referendum on the Greek-Macedonia name deal. An English version of the piece appears below.

On September 30 you will have the opportunity to make a historic choice. Do you want to open the way to giving your country membership of NATO and the EU by supporting the agreement with Greece? We, The Ohrid Group, urge you to say yes.

We are a group of senior international statesmen, diplomats, soldiers, and thinkers who have all been deeply involved in helping your country during the last twenty years. Many of us were here in the early years of this century, including helping to negotiate the Ohrid Accords and being part of the subsequent NATO operations. We are all proud to have helped during your times of trouble. We all left a small part of ourselves in your beautiful country, so now we all want to see you move forward to the better future you deserve.

In mid-June this year the governments of Zoran Zaev and Alexis Tsipras reached an historic agreement over the name issue, thus potentially ending a dispute which has been dragging on for far too long. Subsequently, the EU and NATO recognized this success and extended invitations to you to join, providing that you, as a nation, support that agreement with Greece. Your parliament has voted to hold a referendum on September 30, during which you will have the opportunity to demonstrate that support.

We see this as a “now or never” moment for your country, for you, and for your children’s’ future. Your government and the Greek government were not negotiating as yesterday’s rivals but as tomorrow’s friends. Many of us can remember the dark days in the Western Balkans in the 1990s when lives were dominated by ethnic rivalry, violence, and mistrust. Economic and social progress came to a halt. Those days must remain in the past.

NATO membership offers a security guarantee to ensure that they do. Membership of the EU will bring economic development, increased investment, jobs, and access to European wide programs which will enhance how you live your lives. By joining both, you will be part of a Western European family of nations that is focused on the future and what really matters to people, rather than on old battles and rivalries that now belong to history.

Your government and the Greek government were negotiating as truly democratic governments who have a profound respect for human rights, the rule of law, a free media, and other core European values. That is why they are able to trust each other and to reach an agreement that had been so difficult to find in the past.

Those are the values that you are being asked to support when you vote on September 30, values which are enshrined in EU and NATO. A vote yes does not solve every problem, including with the EU, but it points the way and sets you on a journey with a clear road and a clear destination and a justified confidence you will get there in the end.

Your country may be small, but it has a proud history. You have fought battles of many kinds. But future struggles should now be directed at achieving a better life in the years ahead.

You deserve to participate once again on a far bigger stage, for your people to see their talents deliver prosperity and opportunity as part of the European mainstream.

This is that “now or never” moment. Voting yes will be a vote for the future: your future. It is your choice, and we urge you to seize it.

Ambassador Robert Gelbard, Former US Special Representative for the Balkans

Lord Geidt of Crobeg, Former British Diplomat in the Balkans