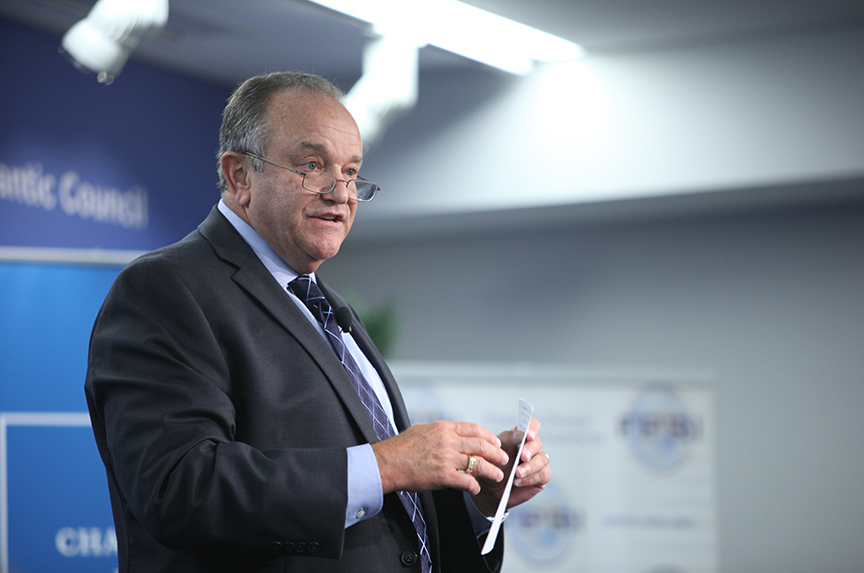 The United States must respond to the cyberattacks it has accused Russia of carrying out without triggering an all-out cyber war, retired Gen. Philip Breedlove, a former NATO Supreme Allied Commander for Europe, said at the Atlantic Council on November 3.

“I don’t believe that a null set is the answer… How our nation responds is quite important,” Breedlove said in reference to a question from Atlantic Council President and CEO, Fred Kempe, on what the United States should do in response to the Russian cyberattacks.

“What does our action or inaction say as it relates to everything from cyber in an election to continually meddling in the borders in South Ossetia,” a breakaway province of Georgia that is supported by Russia, he said. “Where are we setting the bar as it relates to this conflict below the lines?”

In October, just days after the Obama administration had accused Russia of interfering in the US presidential election by carrying out cyberattacks, US Vice President Joseph R. Biden, Jr., when asked whether the United States was preparing to a response to the Russian attacks, told NBC’s “Meet the Press”: “We’re sending a message… [Russian President Vladimir Putin will] know it.”

“And it will be at the time of our choosing. And under the circumstances that have the greatest impact,” he added.

Breedlove struck a cautionary note stating: “We rely so much more on cyber than some of our competitors in the world that if we were to start a big fight in cyber we stand to lose so much more. I don’t think that necessarily that’s the answer.”

Instead, he said, the United States has a “broad series of tools” to respond to such situations and “we have to do that creatively, judiciously… but I don’t think a null answer is the answer.”

Breedlove delivered keynote remarks at a conference jointly hosted by the Atlantic Council, the Charles Koch Institute, the Foreign Policy Research Institute, and the Johns Hopkins School of Advanced International Studies, in collaboration with the University of Pennsylvania. He later participated in a discussion moderated by Alina Polyakova, deputy director of the Atlantic Council’s Dinu Patriciu Eurasia Center.

The Obama administration has accused Russia of carrying out cyberattacks in an attempt to influence the outcome of the presidential election on November 8. The Democratic National Committee (DNC) as well as the Democratic presidential nominee, Hillary Clinton, have been the targets of cyberattacks. Russia has denied the US accusations.

In July, Debbie Wasserman Schultz was forced to step down as DNC chairman after a hack of her e-mails revealed her preference for Clinton over Senator Bernie Sanders (D-VT) as the Democratic Party’s presidential nominee. Clinton eventually won the nomination. The e-mails of Clinton campaign chairman John Podesta, former secretary of state Colin Powell, and Breedlove have also been hacked.

The Washington Post, citing US officials, reported on November 4 that Russia may continue meddling after the elections on November 8 in an attempt to sow doubt about the outcome of the vote.

‘A spell of bad weather’

What does Russia want? What Russia wants, first and foremost, is to be treated as an equal by the United States, said Breedlove. However, Russia’s revanchist behavior has become the primary cause of friction with the West. In 2014, for example, Russia annexed Crimea from Ukraine and has since supported separatists fighting in eastern Ukraine. The United States and the European Union responded to this aggression by imposing sanctions on Russian officials and entities. The United States and the United Kingdom are also considering sanctions on Russia for its airstrikes on the besieged Syrian city of Aleppo.

“Our vector with our large neighbor to the east in NATO is not good,” said Breedlove, referring to Russia. “We are not headed in a positive direction and I will opine that we have to determine how to arrest that bad direction and how to create a more positive path.”

However, Breedlove contended that the change in the US-Russia relationship is not likely to occur anytime soon, regardless of whether Clinton or her Republican opponent, Donald Trump, is elected president.

“We are in for, as my father would say, a spell of bad weather,” he said.

On the other hand, Russia, Breedlove said, sees itself “back on center stage… as being seen as a superpower.” Meanwhile, the United States, he added, needs to be “intellectually honest” about the Russian viewpoint that there is a “path through history that is ingrained in their thought that puts the US in a bad light.”

In his remarks, Breedlove laid out three key challenges in the US relationship with Russia: hybrid warfare or “conflict or competition below the lines” as epitomized by cyberattacks; Russia’s strategy toward the West of an “escalate to de-escalate regime, meaning no matter what you do we will do it a little harder, a little deeper, a little faster, and a little bit more dramatically in order to convince you not to test us in these waters”; and Moscow’s support for tactical nuclear weapons as an important part of any conventional conflict.

“The most surprising thing to me in this new style of exterior competition is that force is back on the table to change internationally recognized borders in Europe,” Breedlove said. He cited as examples Russia’s annexation of Crimea as well as its support for separatists in Ukraine’s Donbas and Georgia’s breakaway provinces of South Ossetia and Abkhazia.

Breedlove contended that the military element should not be the first tool to be used in response to such challenges. Instead, the United States should use what he called DIME—diplomatic, information, military, and economic. So far, the US response to Russia has been a “big E, some D, almost zero I… and very little M,” he said, while making the case for a more balanced approach.

Despite the challenges he outlined, Breedlove said in these challenges lie an opportunity for cooperation.

“We have to find a path to productive dialogue” that would “lead to a measurable, verifiable, tangible outcome that nations could see and say that ‘the US and Russia have made an agreement and made an improvement in Situation X.’” Productive dialogue must produce good behavior and rebuild trust, he added.

US Secretary of State John Kerry and his Russian counterpart, Sergei Lavrov, are regularly engaged in dialogue on crises ranging from Syria to Ukraine. However, this effort has done little to ease tensions in a relationship between the United States and Russia that is perhaps at its lowest point since the Cold War.

Noting that there is a lot of dialogue with Russia, Breedlove questioned whether it has been productive. “I don’t think that productive dialogue comes from a place where we do not have an effective deterrence,” he said.

In response to a question from Polyakova about what the US end goal should be in its relationship with Russia, Breedlove said he supported the US position of “a Europe whole, free, and at peace,” but added the words: “and prosperous.”

“Prosperous is important because … it would help with the current refugee flow if the nations of Europe were more prosperous and their economies were on the rise,” he said referring to the crisis facing Europe where record numbers of migrants have arrived after fleeing conflicts in the Middle East and Africa.

“Being prosperous in Europe would be far easier if Russia was part of that equation,” he said. “If we can get to that point where we are not competing in a belligerent sense we can be more apt to be prosperous.”

Noting that prosperity begins with security, he added: “If we can get to that security arrangement that allows for prosperity to happen, then we are going to be in a better place.”

Image: “We are in for, as my father would say, a spell of bad weather,” retired Gen. Philip Breedlove, a former NATO Supreme Allied Commander for Europe, said in reference to the West’s relationship with Russia. He spoke at a conference at the Atlantic Council on November 3. (Atlantic Council/Victoria Langton)