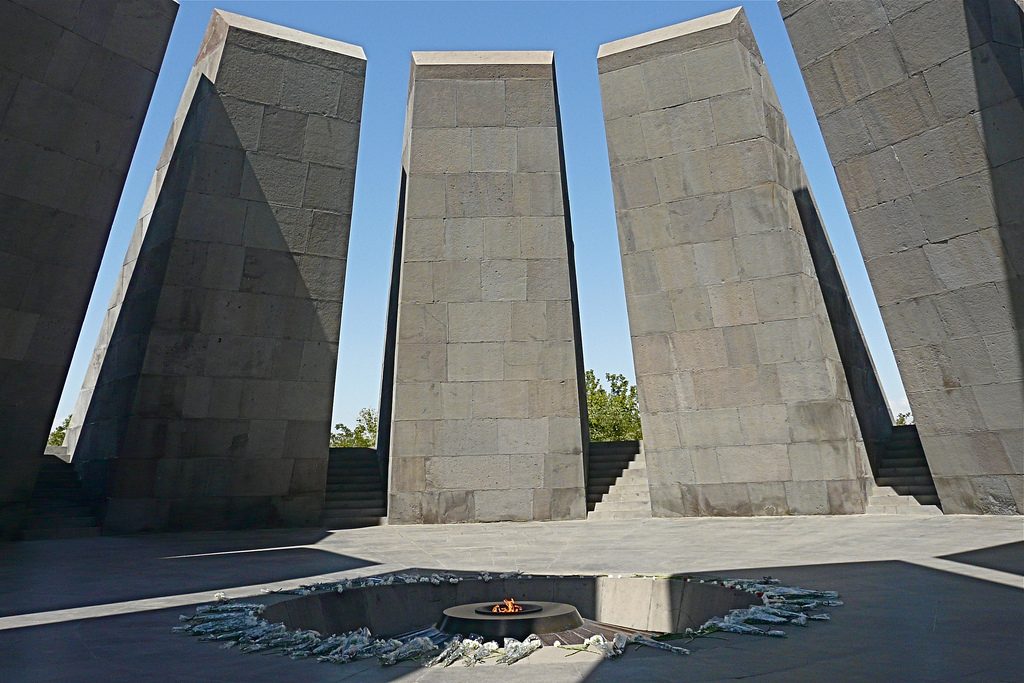 The Spectator‘s Alex Massie and Reason‘s Matt Welch hammer President Obama for joining a long line of politicians who use the phrase "Armenian genocide" on the campaign trail and then scrupulously avoid the G-word once in office.

The Obama administration is hesitating on a promised presidential declaration that Armenians were the victims of genocide in the early 20th century, fearful of alienating Turkey when U.S. officials badly want its help.  President Obama and other top administration officials pledged during the presidential campaign to officially designate the 1915 killings of Armenians by the Ottoman Turks as genocide. Many Armenian Americans, who are descendants of the victims and survivors, have long sought such a declaration.

But the administration also has been soliciting Ankara’s help on Afghanistan, Iraq, Iran and other security issues amid Turkish warnings that an official U.S. statement would imperil Turkey’s assistance. Administration officials are considering postponing a presidential statement, citing progress toward a thaw in relations between Turkey and neighboring Armenia. Further signs of warming — such as talk of reopening border crossings — would strengthen arguments that a U.S. statement could imperil the progress.

American presidents have long sought to avoid calling the killings a genocide, fearing repercussions from a NATO ally that is acutely sensitive to the charge. In 2007, the Bush administration argued for a delay in a congressional genocide resolution, saying that Turkish assistance was needed for the safety of U.S. troops in Iraq.

For Obama, the controversy comes at an especially sensitive time. He is visiting Turkey on April 5, and his views on the issue will command worldwide attention. Armenian Americans, meanwhile, have been pushing for a White House declaration on April 24, the annual remembrance day. Congressional supporters are also planning to reintroduce the genocide resolution soon.

Massie points to a speech from last January given by "Barack Obama on the Importance of US-Armenia Relations" that’s still posted on the Obama-Biden website in which he expresses his "firmly held conviction that the Armenian Genocide is not an allegation, a personal opinion, or a point of view, but rather a widely documented fact supported by an overwhelming body of historical evidence. The facts are undeniable."  Obama went on to assert that, "An official policy that calls on diplomats to distort the historical facts is an untenable policy" and to vow, "as President I will recognize the Armenian Genocide."

If you think you’ve heard this tune before it’s because you have. It’s become a ritual: all Presidential candidates decry the Armenian genocide on the campaign trail and the successful ones always welsh on calling it that once they are in power. George W Bush was no exception. Realpolitik you say? Just the usual campaign stuff you have to say? Well, perhaps. But if politicians want to be taken seriously perhaps they should cease being quite so cynical.

Perhaps.  But here’s the thing:  Being president carries different responsibilities than being a Senator, a presidential candidate, or a political pundit.

Of course the slaughter of a million and a half people between 1915 and 1923 constitutes genocide.  Of course, the history books should acknowledge this.

But it’s far from clear why the President of the United States must declare this fact from the perch of his office and alienate a key ally in the region.The tragedy ended 86 years ago, after all.  Turkey straddles Europe and Asia, Christendom and Islam, and is the linchpin of the Mediterranean and Black Sea regions.   It borders Georgia, Iran, Iraq, and Syria — all rather important actors in the region.

In a piece for LAT two years ago, Welch addressed that objection:

Across the Atlantic, the Armenian question — especially Turkey’s offensive laws against "insulting Turkishness," which have been used to prosecute even novelists who create fictional characters questioning the government’s denialist position — has become one of the main lines of attack against Turkey’s bid to become the first majority-Muslim country to join the European Union. Most of the 15 countries that have officially recognized the genocide are European (with Switzerland and France even going so far as to pass over-the-top laws making it a crime to deny the genocide).

Then there was the January murder of ethnic Armenian journalist Hrant Dink in broad daylight on a busy Istanbul street. Dink’s assassination, at the hands of a Turkish nationalist, shocked the world and led to a wave of anxious introspection in Turkey. Yet Ankara quickly — and disastrously — concluded that the proper response was to redouble its losing campaign to prevent foreign governments from using the G-word.

But what evidence is there that backing the Turks into a corner on this sensitive issue will cause them to reconsider their history and reach sudden reconcilliation?  The much more likely outcome is for the Turks to feel bullied.

The fact that the United States consistently fails to pass an official declaration on the Armenian genocide year after year, decade after decade, despite a strong Armenian diaspora and that presidents as divergent as Bush and Obama follow suit is testament to the fact that actions have consequences.

"Honesty is the best policy" is generally a great axiom for people to live their lives by.  In international diplomacy, however, a competing axiom is often more true: "Discretion is the better part of valor."