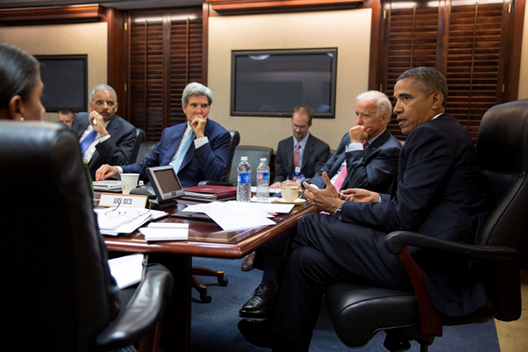 After a week of signaling that a US-led attack on Syria was imminent to punish the Assad regime for the inhumane and internationally condemned use of chemical weapons against his own people, US President Barack Obama announced two decisions Saturday: first, that he had decided to take military action against Syrian regime targets; but second, that he would seek Congressional authorization for the planned “limited” and “narrow” operation in order to ensure a healthy and informed public debate.

This means that the operation will not start until the week of September 9, at the earliest (unless congressional leaders force US lawmakers to return early from their vacations), a full two and a half weeks since the August 21 chemical weapons attack in the suburbs of Damascus. It also means that if Congress votes against authorizing the use of force, the president, with his decision already made, will initiate the operation with the explicit disapproval of the elected representatives of the American people.

Thus, while the decision to seek congressional authorization is understandable and salutary, it was the wrong decision in this circumstance for three reasons:

First, because of the importance of a timely response to Assad’s use of chemical weapons in order to restore the credibility of US security commitments—both vis-à-vis the president’s “red line” against Assad’s WMD use, and vis-à-vis US security allies and partners around the world, all of whom have been watching US decisions regarding Syria closely. The decision to seek a vote will greatly weaken the impact of any operation. Besides the overt support of France, the Wall Street Journal reported that US allies such as South Korea, Turkey, Israel, and Saudi Arabia covertly implored the United States to respond to Assad’s actions with force, stating that inaction or delay could convince adversaries that the United States is not serious about its security guarantees. Indeed, South Korea worries that not acting punitively could embolden North Korea, while Middle Eastern allies fear Iran would continue its pursuit of nuclear weapons undeterred. Just because Chairman of the Joint Chiefs of Staff General Martin Dempsey said the military would be ready to go, no matter how long the delay, does not mean it was strategically advisable to postpone a needed, swift, and effective response. The postponement is a gift to Assad, the Syrian military, and Syria’s ally, Russia.

Assad will use the time to further complicate any US operation and reduce its ultimate effectiveness.  Sources claim that Assad is moving civilians in and around military locations that are potential US targets, and he will move military units into civilian neighborhoods. He likely also will move chemical weapons to new locations, raising the dangers that these weapons will further spread into the hands of those who might use them against innocents.

Assad’s military shelling intensified after Obama’s remarks concluded—a taste of things to come over the next few days and weeks. With the knowledge that a US attack is eminent in the two- to three-week timeframe, Assad’s military likely will continue to increase the tempo of its operations against civilians. Even if the Syrian military does not accelerate its operations, since an average of more than 4,000 civilians have been killed every month since the beginning of the conflict, the two and a half week delay could mean another roughly 2,500 Syrians killed before the Syrian military has to return its attention to the looming US-led attack.

Russia, too, will use the interim period to its advantage and to the detriment of US interests. Russian President Vladimir Putin will search for new diplomatic means to complicate and delay any US operation, and likely will rush additional Russian military assets to the Mediterranean in an effort to dissuade the initiation of hostilities.

Second, as the president said, it is within his authority to carry out this limited military operation without specific congressional authorization. By seeking Congress’ approval for such a limited operation—and, it should be said, not doing so for the United States’ larger involvement in Libya—he has set a new precedent for congressional checks on executive power to conduct foreign policy that, in this world of very rapid geopolitical changes and continuously developing information, will serve to hamstring future US presidents in ways that will harm US security interests.

Third, if Congress says no, what then? Will Obama initiate the strikes anyway, thus risking an operation that puts US servicemen and women in harm’s way without the consent of the American people? Or will he demur, like UK Prime Minister David Cameron, putting at risk a wide range of US treaty commitments and destabilizing regions due to a free fall in confidence about US defense guarantees by our allies?

While President Obama clearly wants to do the right thing in Syria, his decision to delay the operation and seek congressional authorization was politically expedient but strategically unwise. Close allies of the United States, already concerned about US defense budget cuts and diminished US resolve, will grow more alarmed. Moreover, the president might feel he has the time to wait for Congress to deliberate—and he does—but so does Assad. Meanwhile, the innocent citizens of Syria do not.