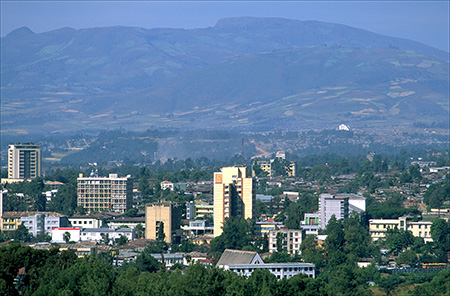 “This is a country with which we’ve had diplomatic relations for more than a century,” said Pham, Director of the Atlantic Council’s Africa Center. “Economically, it’s one of the five fastest-growing countries in the world, with a number of years of double-digit growth. And with its population of 90 million and its tremendous potential for US companies, it’s also an anchor of stability in a very volatile region.”

On June 19, the White House announced that Obama would stop in Addis Ababa sometime in late July on his way back from Kenya, where he plans to visit his father’s homeland for the first time as President. Specific dates for the trip have not yet been made public.

In addition to being Africa’s second-most populous country (after Nigeria, with about 175 million people), Ethiopia is home to the headquarters of the fifty-four-member African Union (AU), which was established in Addis Ababa in 2001 to replace the Organization of African Unity (OAU).

Pham said the country’s location on the Horn of Africa—and its proximity to Djibouti, Eritrea, Kenya, Somalia, Sudan, and South Sudan—makes it of particular strategic importance to the Pentagon.

“With the exception of the period when Mengistu Haile Mariam and his Marxist military junta, the Derg, aligned the country with the Soviet bloc and welcomed tens of thousands of troops dispatched by Fidel Castro, Ethiopia has historically been a strong ally of the United States,” said Pham. “Our countries fought on the same side during World War II, and more recently worked with the United States in the global effort against terrorism after the September 11, 2001 attacks by al-Qaeda on the American homeland.”

He added: “In the last few years, Ethiopia has hosted a discrete US military presence in the southern part of the country, where service personnel maintain several unmanned aerial vehicles assigned to counterterrorism missions in East Africa.”

Furthermore, the Ethiopian National Defense Force (ENDF) has played key roles both in Somalia—where Ethiopian troops participate in the AU’s mission fighting al-Shabaab terrorists—and in the disputed Abyei region between Sudan and South Sudan, where the ENDF as well as Ethiopian police and civilian personnel make up most of the United Nations Interim Security Force for Abyei (UNISFA).

Overall, he said, Ethiopia ranks fourth worldwide and first among African nations in its contributions to United Nations peacekeeping operations around the globe.

Economically, Ethiopia is emerging as an African leader in hydroelectricity, thanks to an ambitious construction program that aims to harness the potential of the Blue Nile as well as that of the Nile River’s other major tributary, the Atbara River, which originates in the heart of Ethiopia’s highlands near Laka Tana. Together, the two rivers account for nearly 90 percent of the water and over 95 percent of the sediment carried by the Nile proper.

“Since the overthrow of the Soviet-backed communist Derg regime in 1991, political stability, improved governance, and heavy investment in infrastructure have led to growth that has lifted Ethiopia out of abject misery in just one generation,” Pham said. “Anyone who has visited the country more than once notes the transformation taking place constantly.”

The country’s potential to expand will grow even more, he said, if the US Congress renews the African Growth and Opportunity Act (AGOA), which expires in September.

“There will be those who criticize the visit because of one difference or another with the government of Ethiopia,” Pham noted, “but the President’s visit is not so much a ‘Good Housekeeping seal of approval’ as an opportunity to engage a key partner—including on topics on which we might differ—and above all, to advance US strategic interests.”

On June 22, The New Atlanticist’s Larry Luxner spoke with Pham. Here are excerpts from our interview:

Why is Ethiopia so important for President Obama to include on his African agenda?

Pham: This is a historic first visit of any sitting US president to Ethiopia. This is a country with which we’ve had diplomatic relations for more than a century. Economically, it’s one of the five fastest-growing countries in the world, with a number of years of double-digit growth. And with its population of ninety million and its tremendous potential for US companies, it’s also an anchor of stability in a very volatile region.

Ethiopia is also a key counterterrorism ally of the US in the region. And it’s not just the visit to Ethiopia as a country, but also Ethiopia’s capital, Addis Ababa, which is the headquarters of the African Union. This is going to be the first presidential visit either to the AU or to its predecessor, the OAU.

Over the past twenty years, the US has been a key partner of Ethiopia. It helped broker the referendum and the succession of Eritrea. It also helped broker the peaceful entry of the then-insurgents into the capital and the evacuation of Mengistu.

So how much of this visit is tied to al-Shabaab?

Pham: Certainly, Ethiopia’s role in fighting al-Shabaab is important, but that’s not the reason for the visit. Ethiopia is geopolitically important, both because of its size and as the headquarters of the AU. Al-Shabaab is one facet of the partnership, but even if al-Shabaab were to disappear, our relationship with Ethiopia would still be of key importance.

Although Kenya is his father’s ancestral homeland, many Kenyans seem disappointed that Obama has waited until now, the seventh year of his presidency, to pay the country a visit. Why has it taken that long?

Pham: Ethiopia is far more important than Kenya, but to be fair, I think the Obama administration has had a lot of issues to deal with. Until recently, when the case collapsed against him, Kenya’s President [Uhuru Kenyatta] was under indictment by the International Criminal Court, so it would have been politically difficult for Obama to visit. But this administration gets credit for holding the first-ever US-Africa Leaders Summit last year, the largest such summit ever convened by a US President. And that was an important milestone.

What is your assessment of the International Criminal Court’s African indictments?

Pham: The ICC started with the noblest of intentions, but justice doesn’t operate in a vacuum. It has to have political legitimacy, but the ICC has been tone-deaf, thus playing straight into the hands of either its targets or other cynical leaders, as well as those who have good-faith objections. All thirty-two people who have been indicted have been Africans, and all nine current investigations are in Africa.

How would you assess President Obama’s track record on Africa in general?

Pham: When George W. Bush became President, US foreign assistance to Africa was roughly 1.5 billion dollars a year. Under Bush, that quadrupled to more than six billion dollars. Under Obama, it’s moved marginally up and down. Obama didn’t vastly increase the budget for aid to Africa, but has kept it more or less at the same level Bush left him with—even while every other region of the world lost about 20 percent in US assistance. So if Bush gets credit for upping the game, Obama helped protect it. Africa has been one of the few areas of the world that’s enjoyed wide bipartisan support. In May, the Senate voted ninety-seven to one to extend AGOA for another ten years, and it passed the House with about four hundred votes.

How legitimate really is the African Union? Pham: It’s not perfect, but many Africans look to the AU, and if one looks at its history, it’s done more in the ten years it’s been up and running than its predecessor did in the previous forty years. On a number of issues, they’re much more pro-active than the OAU ever was. In Darfur, it was the AU that mobilized the peacekeepers, not the UN. And the Somali mission is still an AU mission.