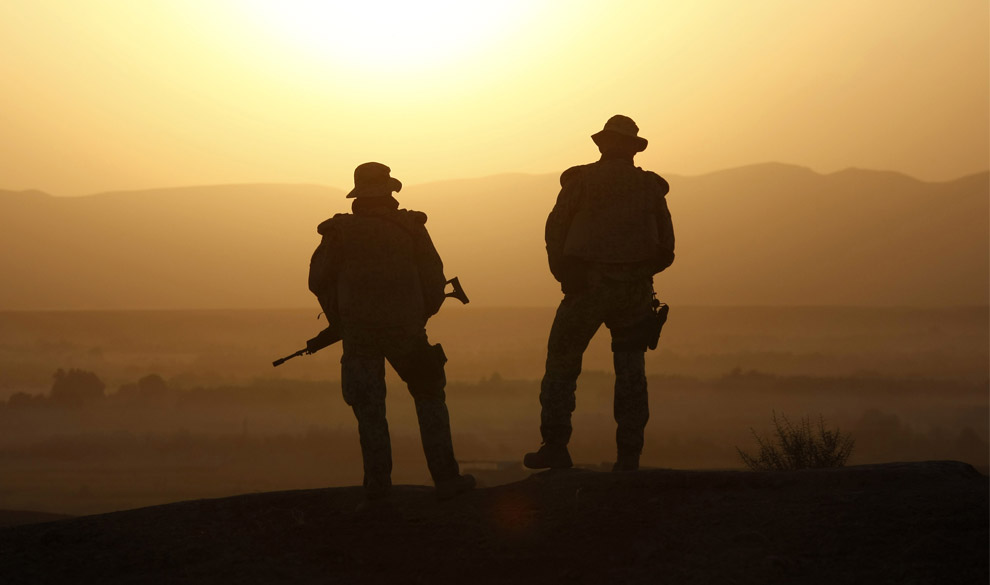 During the campaign, Barack Obama repeatedly criticized the Bush administration’s handling of the war in Afghanistan.  Most notably, he argued that we had been distracted by the war in Iraq and had diverted resources to that conflict, which he opposed, that could better have been devoted to fighting al Qaeda and finding Osama bin Laden.  Now that he’s been elected, he’s about to become responsible for producing results.

A front page story in today’s Washington Post written by Karen DeYoung outlines plans gleaned from unidentified “Obama national security advisers” about how the new administration will handle this challenge.

The incoming Obama administration plans to explore a more regional strategy to the war in Afghanistan — including possible talks with Iran — and looks favorably on the nascent dialogue between the Afghan government and “reconcilable” elements of the Taliban, according to Obama national security advisers.

President-elect Barack Obama also intends to renew the U.S. commitment to the hunt for Osama bin Laden, a priority the president-elect believes President Bush has played down after years of failing to apprehend the al-Qaeda leader. Critical of Bush during the campaign for what he said was the president’s extreme focus on Iraq at the expense of Afghanistan, Obama also intends to move ahead with a planned deployment of thousands of additional U.S. troops there.

This is easier said than done, however.  It’s far from clear where Obama would get these additional troops in the near term. The rhetorical answer — from Iraq, of course! — is impractical for the next year or more.  And, while European leaders may be more anxious to please a new president than they were with the polarizing Bush, one can’t get blood from a turnip.  Even if Obama can convince the Europeans that it’s in their political interests to commit vastly more troops to the mission — and I don’t think he can — most don’t have the troops to give.

Beyond that, it would be ironic indeed if a Democratic successor to Bush seriously made tracking down a single terrorist a high priority.  Outgoing Democratic Party chairman Howard Dean caught a lot of flack when he said that the capture of Saddam Hussein would have little practical impact on our success in Iraq. He turned out to be absolutely right.  Putting bin Laden’s head on a stick — or capturing him and subjecting him to the indignity of an international criminal tribunal — would be enormously satisfying but have approximately zero impact on either stabilizing the region or combatting international terrorism.

For that matter, it’s not as if the Bush team didn’t try.  A new administration brings with it new leadership but inherits the existing intelligence and military apparatus.   Does anyone believe that Obama’s predecessor didn’t want to “get” bin Laden?  If nothing else, it would have been a tremendous October surprise that would have simultaneously boosted Bush’s popularity ratings and given John McCain a shot at keeping the White House in Republican hands.

The good news, though, is the talk of a “regional approach.”  While it’s just silly to say that the Bush administration is still treating Pakistan and Afghanistan as separate issues, they certainly seemed to do that far too deep into this process.  Certainly, Obama will be much more likely to bring Iran and Syria into the mix.  Whether he can ultimately be successful is another question entirely.  But it’s certainly worth trying.

This, too, is interesting:

Advisers also said Obama is open to supporting discussions between the Afghan government and “reconcilable” elements of the Taliban, a nascent effort of which the State Department has been fairly dismissive. Although it supports the terms the Afghan government has laid down — abandoning violence and accepting the Afghan constitution — the Bush administration sees “no serious indication from anybody on the Taliban side that they’re interested,” Assistant Secretary of State Richard A. Boucher said. “They keep hijacking buses, killing people and chopping their heads off. These are not people who have shown any serious desire to negotiate.”

But the Pentagon, at least rhetorically, has left the door open wider. Senior officers describe a substantial portion of Taliban foot soldiers as more opportunistic than ideologically committed. Gates has spoken openly about the possibility of reconciliation, saying, “at the end of the day, that’s how most wars end. . . . That’s ultimately the exit strategy for all of us.” Gen. David D. McKiernan, commander of NATO and U.S. troops in Afghanistan, said during a recent visit to Washington that the idea of “reconciliation, I think, is appropriate, and we’ll be there to provide support within our mandate.”

The amusing thing is that this sounds a lot like McCain’s pet strategy of doing something very much like the Iraqi “surge” in Afghanistan.  Likely the biggest factor in the success of that approach was the paying off of certain elements of the insurgency, the so-called Sons of Iraq, and bringing them into the coalition.  Whether this can work in Afghanistan is an open question but, again, it’s worth trying.

What’s not at all clear, however, is what Obama’s definition of “success” will be.  Most observers agree that there’s a rather low ceiling on what can reasonably be achieved in Afghanistan in terms of political stability, central government effectiveness, and economic progress.  Will Obama make the same mistake as the current president in not setting achievable goals for the mission?