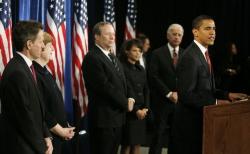 Barack Obama’s cabinet choices have been met by gushing reviews.   While many of his choices have come under fire from both the left and the right on ideological grounds, the consensus seems to be that these are among the brightest, most capable people around.

NBC’s Andrea Mitchell referred to them as “all-stars” and “the strongest, smartest people he can find”  while CBS’ Kimberly Dozier goes with “superstar,” adding also that the picks are “bold” and “inspired.” NYT columnist Paul Krugman, recently awarded the Nobel Prize in economics, is positively jubiliant. “Seriously, isn’t it amazing just how impressive the people being named to key positions in the Obama administration seem? Bye-bye hacks and cronies, hello people who actually know what they’re doing.”

Indeed, it’s hard to recall a more impressive group of appointees.  Unless, that is, one can remember all the way back to 2000, when George W. Bush was assembling his team.

Yes, as improbable as it seems now, given the near-universal sense that the Bush administration has been a failure and that he surrounded himself with people on the basis of personal loyalty rather than competence, his team, too, were known quantities highly respected for their impressive resumes.  That started, incidentally, with the choice of Dick Cheney as his running mate.  The former Defense Secretary and Wyoming Congressman was at least as well regarded in foreign policy circles then as Joe Biden is now.

The Bush foreign policy team looked great on paper.  Yes, Hillary Clinton is a rock star, a former First Lady who came close to winning the presidency.  But Colin Powell was and is a superstar in his own right.  The former JCS Chairman and National Security Advisor was widely considered a top presidential prospect himself.   His White House staff counterpart, Condoleeza Rice, was thought to be a home run as National Security Advisor.  The Stanford provost was a prodigy, having served in senior positions on the first President Bush’s National Security Council.

Over at the Pentagon, Don Rumsfeld was an old Washington hand who had previously served as the youngest ever Secretary of Defense for President Gerald Ford. Paul Wolfowitz, his deputy, was a Chicago PhD with decades of senior level foreign and defense policy experience, keeping important jobs irrespective of which party controlled the White House.

At CIA, George Tenet was a holdover from the Clinton administration who was highly enough regarded to keep his post.

Paul O’Neill, who briefly served as Treasury Secretary, had recently retired as CEO of Alcoa and had previously been chairman of the Rand Corporation.  His previous government service had included the number two slot of Gerald Ford’s OMB and heading up an educational advisory board for George H.W. Bush.

Glenn Hubbard, now Dean of Columbia’s business school, was chairman of the Council of Economic Advisors.  A career academic, he had served as Deputy Assistant Secretary for Tax Analysis in Bill Clinton’s Treasury Department.

The OMB was headed by Mitch Daniels, a one-time chief of staff to Richard Lugar and advisor to Ronald Reagan who head several successful stints in the private sector, including as CEO of the Hudson Institute and senior VP at Eli Lilly.   He’s just been relected to his second term as governor of Indiana, despite that state voting for Barack Obama as president.

John Ashcroft, Bush’s first Attorney General, was quite controversial on ideological grounds.  But the two-term Missouri governor and one-term Senator was certainly accomplished.

Tommy Thompson, who spent fourteen years as governor of Wisconsin and was considered a leading national innovator in both welfare and school reform, was appointed Secretary for Health and Human Services.

Christine Todd Whitman was a two-term governor of New Jersey, headed the EPA.

As it turned out, the Bush All-Stars had more than their share of missteps. American Prospect associate editor  Ezra Klein argues that the reason is cultural: “It’s not that the Bush administration lacked plausibly competent appointees, it’s that it was actively hostile to competence, and utterly obsessed with loyalty. In that case, the president, not his personnel, turned out to be destiny.”

Perhaps.  A more charitable assessment is that, in some cases, people were bad fits for their position.  In others, disagreements within an issue team led to infighting, sabotage, and distrust.  In still others, the confidence that comes with being superbly qualified for the job led to hubris, whether in policy overreach or rejecting the wise counsel of career professionals.

There are plenty of indicators, based on having run a nearly flawless presidential campaign, that Obama will avoid many of his predecessor’s problems.  But I wouldn’t bet the house on each one of his picks being a home run, much less all of the huge egos managing to subordinate themselves to the good of the team.

Responding to a NYT editorial noting that, as accomplished as Timothy Geithner and Lawrence Summers, Obama’s choices for Treasury Secretary and National Economic Council director, respectively, are, they both played leading parts in creating some of the current mess and hoping they’ve learned something from their mistakes, entrepreneur Dave Schuler observes, “I’m sure they have learned by their experiences. They’ve learned that so long as you’ve got the right stuff on you resume there is no screw-up so bad that you won’t get promoted anyway.  It’s the same thing that CEO’s of financial firms, automobile companies, and, I have no doubt, dozens of other kinds of companies have learned.”

There’s something to that, I think.  In the case of Geithner and Summers, the consensus is that they’ve done exceedingly well in their past assignments (although some may demur re: the latter’s tenure as Harvard president).  But, often, as with athletic coaches who keep getting jobs despite losing records, simply having been hired to an prestigious position previously is often considered proof of exceptional competence.