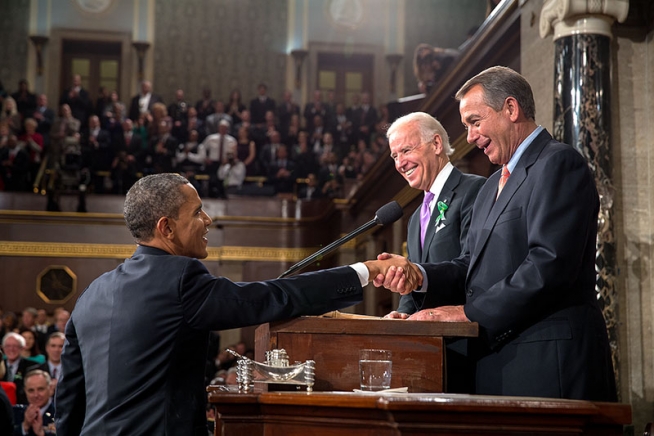 President Barack Obama devoted just one sentence in last week’s State of the Union address to call for a new transatlantic trade and investment deal. However, if negotiated with sufficient ambition and presidential engagement, it is Obama’s best chance yet at leaving a positive foreign policy legacy.

The other global issues Obama catalogued in his speech were largely about avoiding the worst: North Korea, cyber threats, Iran, Syria and other Middle Eastern upheavals.  Achieving what Obama called “a Transatlantic Trade and Investment Partnership,” however, has all the makings of grand strategy.

It is about nothing less than combining the world’s two largest economies and communities of common interest in a manner that could reshape all global trade and investment standards. It would also reinvigorate the Cold War’s victors, known then as “the Free World,” at a new inflection point of history. Only through common cause can the United States and Europe ensure they continue to write global governance rules even as they lose relative power and influence to countries that are less committed to democratic rights and free markets.

The magnitude of U.S.-EU economic relations still has no rival. Despite the euro zone crisis and slow U.S. growth, the United States and the European Union still account for roughly 50 percent of the world’s gross domestic product and enjoy more than $3 trillion in cross-foreign direct investment. U.S.-EU trade in goods and services accounts for 40 percent of the world total, or $636 billion in 2011. The U.S. Chamber of Commerce reckons that figure could increase by $120 billion in the next five years  – if the two sides can eliminate tariffs.

Former U.S. ambassador to the European Union Boyden Gray has called the prospect of such a U.S.-EU accord “an economic NATO.” His point isn’t that anyone wants to create another cumbersome transatlantic bureaucracy. Rather, the deal could harness the economic attraction of the world’s largest and most robust trade and investment relationship at a time when falling defense budgets and Afghan troop withdrawals endanger the North Atlantic Treaty Organization.

What makes an U.S.-EU accord so crucial is its timing. The National Intelligence Council, in its quadrennial report on global trends, described this era as similar to 1815, 1919, 1945 and 1989  – times when the actions of political leaders shaped history in ways good and bad.

In 1815, Austria’s Metternich and others at the Congress of Vienna redrew borders. They created the Concert of Europe and provided nearly undisturbed peace for almost 40 years.

In 1919, President Woodrow Wilson and others laid the tracks for World War II by signing the Versailles Treaty after World War I.

After 1945, President Harry S. Truman and his allies performed better, giving birth to the global and transatlantic institutions that set the stage for Cold War victory  – and still provide the glue for world governance.

Then in 1989, President George H.W. Bush, German Chancellor Helmut Kohl and Soviet leader Mikhail Gorbachev ended the Cold War without a shot, unified Germany, expanded Europe and ushered in a new era of globalization that has embraced China and others.

The world now faces the most dramatic shift in political and economic power and influence since the 19th century. With its relative economic size and influence in decline (the American share of global GDP has fallen from 50 percent in 1945 to 18.9 percent now), the United States needs Europe more than ever if it is to shape global outcomes.

Obama will have to grasp the historic stakes, however, and be fully engaged with European leaders if he is to overcome the obstacles that lie before one of history’s most complex trade and investment agreements. Vice President Joe Biden at the Munich Security Conference in early February warned that a new U.S.-EU agreement had to be done “on a single tank of gas,” and U.S. and EU leaders have vowed to conclude their negotiations within two years.

As Obama decides how much political capital to invest in the process, he needs first to grasp the enormous stakes. He framed the agreement narrowly in his State of the Union address as something that would help the United States create jobs and growth. But failure to reach agreement will increase the likelihood that China and others will set the rules for the 21st century.

The United States and Europe are still the largest trading blocks. So there is a window of opportunity to reach an accord that could become the standard for other bilateral and regional arrangements. Thus Washington and Brussels must ground their agreement on core principles of nondiscrimination — meaning that others would be allowed improved access to the giant U.S.-EU market if they adopt the same standards. Emerging markets would then be more likely to adopt rather than undercut Western best practices.

The agreement could also reinvigorate a transatlantic relationship that is vital across a great many other issues. U.S.-European cooperation, for example, has given teeth to the sanctions against an Iran seeking nuclear weapons. Close transatlantic collaboration will also be necessary to address Middle Eastern upheavals, particularly now in Syria, and the spread of al Qaeda associates to Northern Africa and elsewhere  – where the French have been disappointed by what they consider Washington’s limited and reluctant support.

There was much fanfare when U.S. officials announced their “pivot to Asia” in November 2011. But the concept caused consternation in China, which feared Washington was seeking to contain its rise, and in Europe, where U.S. allies worried about abandonment.

An Obama administration pivot back to Europe has no such downsides. But it can only succeed if the president seizes the historic moment and makes it his legacy.