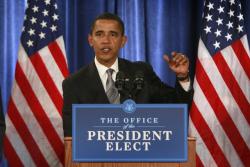 We’re about to see a great shift in resources from the military to other actors, David Sanger argues.

Yet all three of his choices — Senator Hillary Rodham Clinton as the rival turned secretary of state; Gen. James L. Jones, the former NATO commander, as national security adviser, and Robert M. Gates, the current and future defense secretary — have embraced a sweeping shift of priorities and resources in the national security arena.

The shift would create a greatly expanded corps of diplomats and aid workers that, in the vision of the incoming Obama administration, would be engaged in projects around the world aimed at preventing conflicts and rebuilding failed states. However, it is unclear whether the financing would be shifted from the Pentagon; Mr. Obama has also committed to increasing the number of American combat troops.Whether they can make the change — one that Mr. Obama started talking about in the summer of 2007, when his candidacy was a long shot at best — “will be the great foreign policy experiment of the Obama presidency,” one of his senior advisers said recently.

The adviser, who spoke on the condition of anonymity because he was not authorized to speak publicly, said the three have all embraced “a rebalancing of America’s national security portfolio” after a huge investment in new combat capabilities during the Bush years.

We’ve spent a vast amount of money on the military, although it’s not clear to what extent we’ve acquired “new combat capabilities” for our money. But I join Matt Yglesias in proclaiming the described shift as “a really good idea.”

I’ve been arguing since the 1993 Somalia mess that we need to shift resources from traditional combat power to softer power capabilities necessary to be successful at stability operations. While I generally oppose those missions, we’ve had nearly two decades of proof of a bipartisan inability to resist entering into them.

In the early days, my concern was with realigning resources within the military from tanks and bombers and fighter jets to military police, engineers, civil affairs, and linguists. Frankly, we still need to do much, much more in that regard. Now, though, it’s abundantly clear that we need to reconfigure State to make it more able to deploy officers to dangerous areas and otherwise create a large corps of deployable people skilled in these types of missions.

Having a former CIA director and Republican-appointed SECDEF and a former Marine Commandant on board will insulate Obama from criticism from the right and Clinton will do the same from the left.