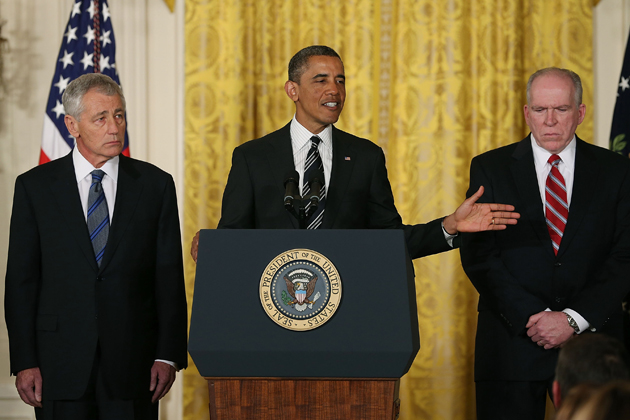 President Barack Obama has been commander-in-chief for four years, but the world only now will see the full flower of Obama foreign policy unfold. It likely will have less to do with any grand ambition to shape an increasingly dangerous world, and instead will be focused on avoiding new wars as he focuses on what he has called “nation building” at home.

In the past week, the president has provided important clues about how he views his historic legacy through nominating a national security team that more closely reflects his own personal preferences and through the underlying message he sent last Friday to visiting Afghan President Hamid Karzai. The two men agreed most U.S.-led combat operations in Afghanistan would end this spring, signaling an accelerated end to the second war Obama inherited from President George W. Bush.

First term nominations often involve a complex political calculus that doesn’t entirely reflect a president’s policy and personal priorities, and that was also the case with Obama. Though Hillary Clinton has won global praise for her performance as secretary of state, Obama’s motivation in picking her was driven more by politics than policy. Former Secretary of Defense Robert Gates, though one of the finest leaders to ever serve in the Pentagon, was a Bush administration holdover and often disagreed with White House decisions.

A flurry of misplaced criticism has welcomed Obama’s national security nominations for Term Two: Senator John Kerry for secretary of state, former Republican Senator Chuck Hagel for secretary of defense and trusted White House adviser and counter-terrorism specialist John Brennan as director of the Central Intelligence Agency. Critics’ current focus is on how this group of entirely white men – add now his nominee for treasury secretary Jack Lew – fail to reflect the diversity of the rainbow coalition that got the president re-elected.

Yet we choose our presidents to lead us according to the policy directions they’ve set for the country, not to achieve gender and ethnic balance in their choices of senior officials. On that score, our first African-American president is being true to his voters. What unifies this group is that they are far closer to the president who has nominated them than were his first term choices, both in the policies they represent and in their personal closeness to a president whose inner circle is historically small.

Beyond that, Kerry and Hagel are unified by their close relationships with Joe Biden, a man who has become one of the most influential vice presidents in history. Michael Hirsh in National Journal recounts how Senator Hagel, during a 2008 trip to Afghanistan with Obama, advised the then-presidential candidate Obama to pick Biden as his running mate, saying, “He understands governance better than anyone else. In particular, he understands Congress. He understands how it fits together like no one else you could get. He’s got the political piece. He’s got the policy piece. There’s nobody in his league.”

During the 2008 campaign, then-candidate Barack Obama spoke of his admiration for President Lincoln’s ‘Team of Rivals’ approach to picking his cabinet, referring to the book by Doris Kearns Goodwin… But what Obama is now assembling is more of a Team of Mentors, a group of old lions of the Senate who, along with Biden, helped to shape Obama’s world view during his brief stint as a freshman senator before he ran for president.

That said, no one has grown closer to the president, among this emerging “team of mentors,” than Brennan. Foreign Policy Magazine called Brennan “the Lethal Bureaucrat” and “Obama’s high priest of targeted killings,” and he likely has shaped the president’s approach to intelligence matters and terrorism response more than any other individual. Brennan was one of the earliest to back Obama as a presidential candidate, joining the campaign’s foreign policy team in 2007.

Brennan plays the essential role in shaping and implementing Obama’s vision for protecting the United States, its allies, and its interests from politically motivated violence… Under Bush there were roughly 50 targeted killings; under Obama there have been 343 in less than half the time – 95 percent of them by Predator or Reaper drones.

National security involves dealing with the unexpected, so predicting what outcomes these appointments might shape is difficult in a world where crises percolate across so many borders – Iran, Syria, North Korea, Pakistan, the South China Sea… Beyond that, a terrorist strike at home with horrendous consequences remains the fondest goal of America’s terrorist enemies.

Both Kerry and Hagel, Vietnam veterans with five Purple Hearts between them, will set the bar high for any new military conflict, yet neither are pacifists. (Disclosure – Senator Hagel has served for the past four years as chairman of the board of directors of the Atlantic Council, the bipartisan, public policy organization I lead as president and CEO).

Hagel does not, as he is accused, oppose sanctions against Iran for its efforts to acquire nuclear weapons. Instead, he favors tough multilateral sanctions and exploring all diplomatic alternatives so as to avoid a war launched on the basis of “flawed assumptions and flawed judgment.” At the Atlantic Council in 2010, he warned that once one starts with Iran, “you’d better be prepared to find 100,000 troops, because it might take that.”

As Peter Beinart put it in the Daily Beast, what some Republicans fear:

….is that with Hagel as secretary of defense, it will be impossible for Obama to minimize the dangers of war with Iran, as George W. Bush minimized the dangers of war with Iraq. Hagel would be to the Obama administration what Dwight Eisenhower was in the 1950s, what Colin Powell was in the 1990s … The military man who bluntly reminds his colleagues that war, once unleashed, cannot be easily controlled.

Credit Obama for giving voters what he’s promised, a like-minded team that will help him avoid unnecessary war so that he can focus on strengthening America. However, what may be even more important is the team’s ability to deal with the unexpected. The greatest certainty of the next four years is uncertainty.