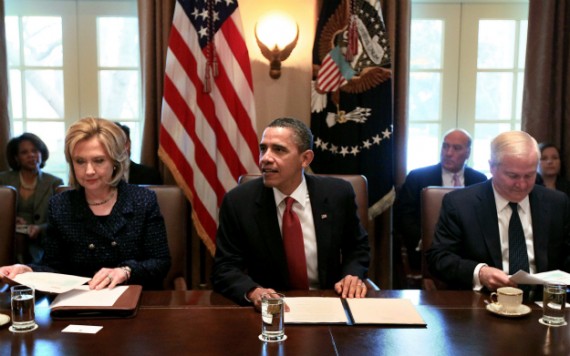 Harvard’s Stephen Walt reflects on the impending game of musical chairs at the top levels of the Obama administration’s foreign policy team:

I don’t think these changes are going to make much difference.  It’s not like Obama will be replacing the current set of officials with people who have a fundamentally different perspective on foreign and defense policy.   Instead, the likely successors in each of these jobs will be drawn from the same pool of familiar foreign policy gurus, chosen from the ranks of traditional Democratic party liberal imperialists. . . . (oops….I meant “liberal internationalists.”)  I don’t expect to see any realists in prominent positions, and certainly no one who favors a major curtailing of America’s self-ordained role as global policeman.

This tells you either that Obama is reasonably happy with his administration’s handling of foreign policy, or (more likely) it tells you that he doesn’t have a lot of options.   In an ideal world, we would see Obama do a ruthless evaluative exercise, and get rid of the people who have performed poorly while doing his best to retain those who have done well.  By this standard, he’d be keeping his Asia team (which has done tolerably well with a difficult situation), giving the nuclear security team a pat on the back, firing the whole Middle East group (whose performance has to be among his biggest disappointments), and he’d be taking a long, hard look at the people who’ve been marching him deeper into the Af-Pak quagmire.

But I don’t expect anything like that to occur.  By now, it is crashingly obvious that Obama is a very conventional foreign policy president, that whatever novel ideas or approaches he brought to office have been thoroughly diluted by entrenched interests in Washington, and his own governing style militates against taking bold positions and sticking with them in the face of opposition.   Just look at how he caved on Gitmo, indefinite detention, drone strikes/targeted killings, or Israeli settlements.   One gets the impression that the administration is already suffering from battle-fatigue, and that there won’t be many (any?) shiny new initiatives even if he wins a second term.

This is fundamentally right. The most important foreign policy voice in any administration is the president and his most influential advisors will be those with whom he’s most comfortable. Almost by definition, that precludes radical change absent extreme pressure from outside–as the previous administration got with the 2006 election thrashing. (Yes, Obama suffered a similar defeat in 2010 but domestic issues were the driving force; Iraq was central in  2006.)

It’s rare that a president comes to the Oval Office with such a strong view on foreign policy matters that he’s willing to risk bucking the experts on key decisions. Ronald Reagan was the most recent, insisting that the Soviet Union was an Evil Empire and demanding that Gorbachev “tear down this wall,” thus boldly going over the cautious consensus that had driven Cold War foreign policy for several administrations. And Bill Clinton was willing to override key domestic policy advisors in favor of the foreign policy experts on some issues, notably trade and the Mexico bailout. But, for the most part, presidents don’t have a foreign policy agenda of their own and ultimately defer to the professionals. This sequence from the third episode of The West Wing, “A Proportional Response,” rings true in that regard.

Unlike the parliamentary systems that govern most other developed nations, which groom prime ministers through a series of lesser positions in the government, the American presidential model almost always favors state governors or Senators with little to no experience—and often a similar level of interest — in foreign policy matters. It’s perhaps not a bad thing, then, that they tend to defer to career professionals.