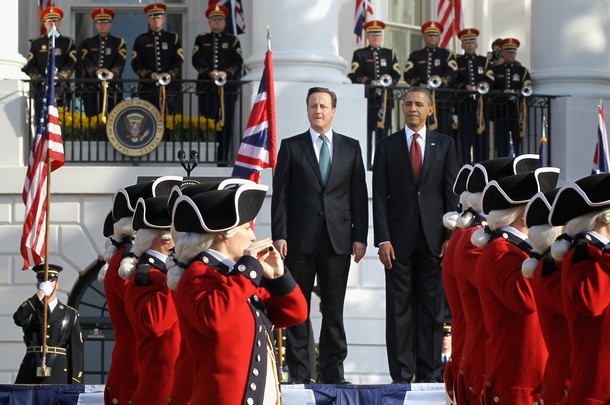 I could tell you where I am but then I would have to kill you. I have just spent the day annoying NATO generals, the majority of whom are British, which is one of my purposes in life. Much of the day was spent by the British explaining the debt-fueled contradiction that is likely to be Britain’s future defense strategy – to remain close to America whilst relying more on NATO. On the face of it such military parochialism might seem a world away from the Obama-Cameron (or, for our purposes here, Obameron) high politics/grand strategy taking place in Washington. It is not. Let me start with the high politics first.

Officially Obameron will consider the deteriorating situation in Afghanistan, Syria, Iran, and of course the joint position the US and UK will likely adopt at May’s NATO Chicago Summit. It is also clear from the red carpet treatment PR-Meister Dave is receiving in DC that the Americans again see a wider significance to the ‘special (yawn) relationship’. After many months of the Merkel-Sarkozy (Merkozy) duarchy assuming the right to speak for Europe, Obameron are in effect formalizing the new fault-line in the transatlantic relationship. Berlin and Paris be warned: Obameron will henceforth contest the European strategic piece with Merkozy.

Those of you out there who react to this statement with bewilderment and object to my suggestion that the German Chancellor and French President could be acting out of anything but the most altruistic of impulses have something of a point…but only something. The Eurozone crisis needed leaders and Germany and France had to act. However, like all power capitals, Berlin and Paris are complex places with a range of arcane and contradictory political and strategic motives. A clear sub-text from the start of the duarchy has been the establishment of a precedent for the future leadership of Europe by Berlin and Paris. It is leadership that neither America nor Britain will ever accept.

Many continental Europeans simply do not understand this and they need to. ‘Liberty’, as defined by national parliamentary democracies exercising sovereign will, was precisely what the Americans and British fought for together in two world wars, at a cost of more than a million and a half dead. The ‘political’ system on offer today for future Europe is not parliamentary democracy. For one I desperately do not want my country to leave the European Union. However, the plutocratic/technocratic path the EU has now taken threatens a shared Anglo-American heritage in which I also passionately believe.

This brings me back to my meeting here in [REDACTED]. The fatal flaw in London’s logic is to equate NATO with the US. NATO is a European organization in which the Americans have at best a waning passing interest. To rely more on NATO means the British relying more on continental Europeans. Not only are the defense budgets of said Europeans in meltdown, but even more importantly so is the political will to use legitimate force and crucially Britain’s at best meager political influence in Europe is also in meltdown.

The contradiction in British defense policy is thus clear. On the one hand the British want to save money by relying more heavily on a NATO command structure in which the US has little interest and on European partners that either do not want to act with Britain or simply cannot. On the other hand the British want to stay close to the Americans militarily even though that will cost a lot of money, especially so as the Americans are about to make the final break from a land-centric defense strategy with Europe at its core to a maritime strategy which does not at all have Europe at its core.

Is there a way out? Possibly, but it is a long shot. First, Chicago must reaffirm the principles of national parliamentary sovereignty the defense of which is NATO’s core mission. Second, Britain, France and Germany must be seen to come together and reaffirm the idea of a united Europe established firmly on the principles of national parliamentary sovereignty. Third, the very practical defense pact that France and Britain share must be expanded to include Germany so that Europe’s new strategic triangle could then begin Europe’s long road back to strategic seriousness.

There is one thing that all parties to this schism need to understand fast; the stakes are very high indeed. Fail and Obameron versus Merkozy could be just the beginning of a strategic realignment that would in time render the Channel wider than the Atlantic.

Mind you what could come next does not sound at all appealing – Romron versus Merkholl?