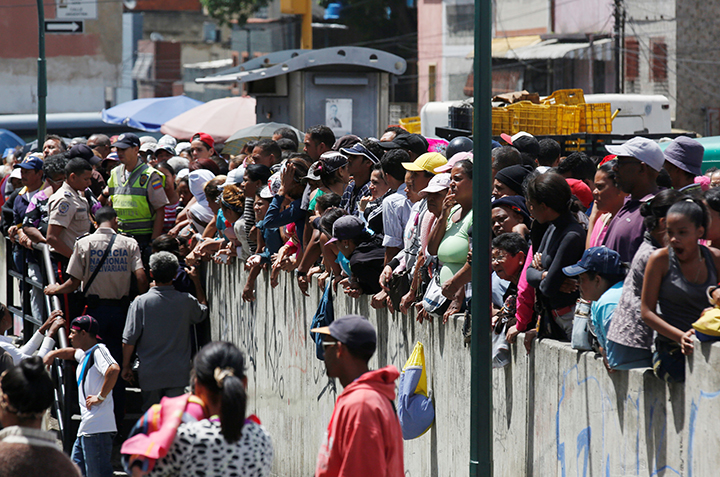 As the June 23 Brexit referendum demonstrates, governments can take irreversible, momentous, and damaging actions without anticipating the consequences. While reason suggests Venezuela should adjust its fiscal policies, ensure basic human needs, avoid sovereign default, and continue oil production for cash flow, it could easily fail to do all of the above.  The ripples of a Venezuelan collapse could stretch from Caracas to Miami. The international community needs to put contingency plans in place to limit the potential damage.

What kind of damage? A humanitarian disaster in Venezuela. A stoppage in oil production and cash flow as Venezuela stops paying its contractors and employees.  A cessation of around 37 percent of all heavy crude imports into the US Gulf Coast. A cut off of credit to the Caribbean and Central America, especially Cuba and Haiti. Massive and sudden migration flows from Cuba and Haiti driven by domestic privation. And all in the middle of the US presidential election season.

Venezuela’s capacity for mismanagement should not be underestimated. Inflation exceeds 400 percent. Access to essential consumer goods, electricity, and even water is intermittent at best. Last week, the head of the Organization of American States (OAS) explicitly blamed Venezuelan President Nicolas Maduro’s government for the humanitarian crisis there and accused it of violating basic democratic principles. PDVSA, Venezuela’s state-owned oil and gas company, must make $1.4 billion in payments on its debt by October and $2.8 billion in November or face default. Absent a shift in fiscal policy it is a race between international creditors and the Venezuelan street to see who will force the government’s hand first.

Venezuela’s neighbors are at risk, especially those who have relied on credit support for oil and products in the Caribbean and Central America. Venezuela has already curbed such exports. Those countries capable of cutting ties are already doing so, as at least five Petrocaribe signatories are no longer receiving Venezuelan supplies while others have reduced their imports. From 2012 to 2014 alone, deliveries to Petrocaribe recipient states declined from 121,000 b/d to under 100,000 b/d. Among those nations still reliant on Venezuelan support are Haiti and Cuba. Haiti’s stock of debt to Venezuela totals around 15 percent of its GDP, while Venezuelan assistance to Cuba has been estimated to comprise more than 10 percent of Cuba’s annual GDP.

To be sure, the nations of the region, with support from the private sector, the US government’s Caribbean Energy Security Initiative (CESI), and several other international assistance programs are already migrating to cleaner fuels and less reliance on Petrocaribe credit support. LNG transshipment will soon be available from the Dominican Republic. Jamaica is moving from fuel oil to LNG, and Panama and El Salvador are accessing cleaner, lower-cost fuels for power as well. CESI is supporting renewable energy deployment through a $20-million Clean Energy Finance Facility for the Caribbean and Central America (CEFF-CCA) and Overseas Private Investment Corporation and State Department-supported projects in Jamaica, St. Kitts and Nevis, and Central America. The Inter-American Development Bank (IDB) and Caribbean Development Bank have enacted their Sustainable Energy Facility to support geothermal projects in Antigua and Barbuda, Dominica, Grenada, St. Kitts and Nevis, St. Lucia, and St. Vincent and the Grenadines.

The US Congress has also taken note. In June, the House of Representatives passed the United States-Caribbean Strategic Engagement Act, which prioritizes developing a strategy to strengthen Caribbean energy security.

None of these efforts will be in place in time to redress a Venezuelan collapse in 2016.  Four steps are needed now.

First, the United States should manage a disruption of Venezuelan supply and minimize the potential of an abrupt surge in global oil prices by planning to loan US Gulf Coast refineries heavy oil from the Strategic Petroleum Reserve (SPR) to bridge a potential shortage until commercial supplies arrive. The use of the SPR for a kind of bridge loan, or time exchange, was done successfully in 2012 when US President Barack Obama loaned oil to refiners affected by Hurricane Isaac.

Second, the international financial institutions should plan for (and publicly signal the availability of) short-term credit support for nations dependent on Venezuelan credit if needed. This support would be a pittance compared to the cost of a migration crisis or a humanitarian disaster.

Third, the international community needs strategies to deal with potential shocks to Haiti and Cuba to avoid a migration crisis. Haiti’s poverty already fuels migration and some crime in the Dominican Republic and the Bahamas. In the short term, Haiti may need help with fuel imports. Longer term, the IDB should lead efforts to encourage the government of Haiti to support the expansion of privately operated renewable/diesel hybrid mini grids to serve Haiti’s eight million underserved people. Cuba is more complex, but the international community might consider (as the Atlantic Council has previously suggested) accelerating Cuba’s reintegration into the International Monetary Fund and the IDB to have their support in mitigating any potential economic shock to Cuba that might foment instability in the Western Hemisphere.

Fourth, the United Nations Office for the Coordination of Humanitarian Affairs (OCHA) and the United Nations Disaster Assessment and Coordination (UNDAC) must, with the support of the Office of US Foreign Disaster Assistance, begin contingency planning to address a humanitarian crisis in Venezuela with an eye to mobilizing international support for food, medicine, and basic needs.

The swift and negative consequences of a vote for Brexit demonstrate the inherent volatility of geopolitics. The international community has an interest in mitigating the impact of Venezuela’s instability on the other nations of the Western Hemisphere and beyond. The United Nations must lead contingency planning efforts to limit the contagion of a Venezuelan collapse and ensure those countries most severely impacted by a forcible cutoff of credit-supported Venezuelan exports have resources at their disposal to ensure their own stability.

Goldwyn and Gill are co-authors of “The Waning of Petrocaribe? Central America and Caribbean Energy in Transition.”

Image: People gather to buy food and other staple goods outside a supermarket in Caracas, Venezuela, on June 30. Venezuela is facing severe shortages of food and medicines. (Reuters/Mariana Bazo)