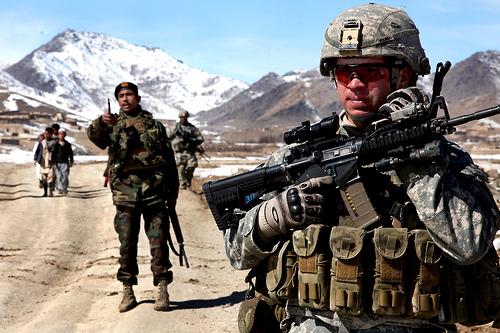 I think it is worthwhile to spend a little time discussing the issue of “strategy” as a concept because I think a significant source of tension and dispute in recent debates is due to a misunderstanding of some of the key elements of the term.   I am leery of addressing this issue directly because it put me into something of a didactic mode (or should I say “even more didactic than usual”?).  But regardless, here goes.

From my perspective, strategy needs to be conceived of as an iterative framework connecting ends, ways, means, and risks in a way that allows for the development and comparison of various courses of action (among other things), but also allows for the generation of branches and sequels, consideration and testing of assumption, an analysis of time, and other factors.  It isn’t just a plan of action.  It is an analytical framework. One key element includes the formulation of assumptions, which are necessary propositions used to bridge areas of uncertainty.  Another key element is the concept of risk which is essentially the feedback mechanism use to judge whether a given course of action is acceptable.

There is a misguided notion that strategy must always flow in a linear fashion starting with a consideration of interests, followed by a development of objective, and finally an allocation of means/ways to accomplish the desired end.  This is one approach, and it is an approach that is useful under two conditions — when interests generate clear objectives and when means are unconstrained.  Neither of these conditions holds in Afghanistan (but more on that later).

But because strategy is an iterative process, there is actually no reason to begin with interests.  You could begin with mean or you could begin with a discussion of what kinds of risks you are willing to tolerate.  As a practical matter, it is often best to ground a strategic discussion precisely on those elements on which you have the greatest certainty.

Okay, so let’s revisit Afghanistan.  Here are my certainties: Our irreducible interests in Afghanistan are relatively minimal.  They are: (a) reasonable security from attack emanating from its territory and (b) prevention of human rights violations that approach the level of genocide.  Based on that assessment, essentially CT and human security, I cannot justify an expenditure of $100 billion a year and placing in jeopardy 100,000 American troops.  Now, are those our only interests?  Of course not.  We have an endless series of interests in Afghanistan — regional stability, containment/defeat of radical Islamist groups, mineral resources, and so on.  And these secondary interests, at the margins, can justify a greater expenditure of resources.  But right now, I’d propose that our investment in Afghanistan is like an order of magnitude too high given the issues at stake.

In short, my starting point, based on an assessment of interests is that our expenditure of means should be limited to something in the neighborhood of $10 billion a year.  The question for me, then becomes what can I buy in terms of objectives in support of my interests for roughly that amount?  I don’t actually know the answer.  But here is one thing I do know:  It is not enough to defeat the insurgency.  As a result, since I still have some value for stability in Afghanistan — both for human rights and CT purposes — it leads me to want to pursue some sort of negotiated solution.  It isn’t necessarily that I think such an outcome is either optimal or possible.  But it is the only course of action that is consistent with the ”budget” I have established.  The only assumption I require here, by the way, is that some sort of negotiation and reconciliation is not impossible.  And as an empirical matter, I think that is a sound assumption.  If you look at the leaders of many of the key insurgent groups, you’ll note that they have arrayed in various shifting coalitions over the past 30 years.  I see no reason to assume that we’re looking at a wholly intractable situation in that regard, though I am open to being convinced otherwise.

Now, because a consequence of my approach is a massive reduction of U.S. forces, I need to consider the risks to my approach, and they are substantial.  But they are also tremendously uncertain.  True, advocates of de-escalation tend to be overly sanguine about the ability of the Karzai government to contain the insurgency in non-Pashtun areas.  But it is also true that advocates of a robust COIN campaign tend to overstate the ease with which the Taliban would return to power over the whole of Afghanistan were we to leave.  I don’t know what would happen to the insurgency if we withdrew, but nor does anyone else.  We’re all making a series of assumptions on this score.

Because the assumption on this score has a significant outcome — I would argue as a corollary assumption that if the Taliban does sweep to a rapid and decisive victory in the wake of a U.S. drawdown it would both put in jeopardy our humanitarian interests and probably make the re-establishment of an AQ safe-haven more likely — any course of action I propose must carry with it a risk mitigate component in case my assumption (that Karzai can hold on with minimal assistance) turns out to be wrong.  And I have consistently including this sort of risk-mitigation element.  Maintaining an off-shore CT capability able to strike at large, fixed AQ facilities is my main CT risk mitigation element; and I would propose the creation of a robust refugee management system and catchment areas to mitigate the humanitarian consequences.

My framework is not perfect.  But it is grounded in what I think is a credible assessment of the reasonable burden we should be willing to bear in Afghanistan as well as a realistic assessment of what we might actually be able to achieve with a fraction of the current resources we expend.  Of course, it has more risks than a $100 billion a year campaign.  That is like noting that a Ford Escort has less pick-up than a Ferrari.  Yeah, but the Ferrari costs ten times as much.

So yes, a lot of the draw-down arguments begin with a preference for reducing the commitment and the draw to build the more plausible possible framework around that preference.  But that is okay.  You are allowed to do strategy that way, and in Afghanistan where uncertainty is the rule rather than the exception, grounding a strategic framework in precisely that kind of analysis is more than okay – it is a good idea.  I don’t know how to stabilize Afghanistan, but I know I don’t want to spend $100 billion a year doing it — so for me the key strategic question is what can I accomplish for what I am willing to spend — which is roughly $10 billion a year.

Now, there are a lot of other elements here.  And I while my reader may not believe it, I am perfectly capable of walking through all the elements of the strategy.  In the interests of saving my readers’ eyeballs, I won’t do it here.

Dr. Bernard I. Finel, an Atlantic Council contributing editor, is Associate Professor of National Security Strategy at the National War College.  His arguments are his own and do not represent the views or opinions of the National War College, National Defense University, or the Department of Defense. This was originally posted on his personal blog BernardFinel.com. Photo credit: Flickr user U.S. Army.