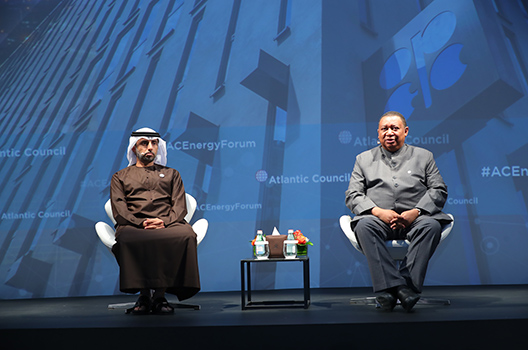 OPEC’s secretary general and its former president on January 13 defended the group’s decision to cut oil production by 1.2 million barrels per day from criticism that the cut is insufficient to address the slowdown in the market.

The United Arab Emirates’ Minister of Energy and Industry Suhail Al Mazrouei, who concluded his term as president of the Organization of the Petroleum Exporting Countries (OPEC) on January 1, said there was no immediate need to cut oil production further.

“We will do our share, but we are not ready to cut like what we used to cut in the past—four million barrels or five million barrels [a day]—to just adjust for the market,” Al Mazrouei said.

As oil prices plummeted to $44 a barrel toward the end of December 2018, OPEC and its non-OPEC allies—the so-called Vienna Alliance—agreed to cut oil production by 1.2 million barrels a day despite pressure from US President Donald J. Trump to maintain output levels and keep prices low. Under the deal, OPEC members agreed to make cuts totaling 800,000 barrels a day while Russia and other non-OPEC oil-producing countries will cut 400,000 barrels a day.

“I think 1.2 [million barrels a day] is enough,” Al Mazrouei said. “The question was, should we do it for longer than six months. We had a long debate because there are concerns there will be more shortage of supply other than us,” he added. Iran and Venezuela, which are not part of the oil cut deal, have seen their individual outputs shrink as a consequence of US sanctions and a deepening political crisis, respectively.

“[J]ust wait for a quarter and then you will see that we are right again,” Al Mazrouei said at the Atlantic Council’s 2019 Global Energy Forum in Abu Dhabi.

Al Mazrouei, who isn’t worried about a financial slowdown in 2019, said: “What we are planning for 2019 is that even if there is a slowdown we are ready for it.”

OPEC will meet in April to decide its output policy for the rest of 2019.

OPEC Secretary General Mohammed Barkindo, who shared the stage with Al Mazrouei, said: “The decision [to make the cut], as complex as it was, was data-driven.”

“The data was very clear in terms of demand projection for 2019 when we revised down from about 1.5 [million barrels per day]” in December 2018, he added.

In 2017, the Vienna Alliance, which was forged the year prior, cut around 1.8 million barrels a day of crude oil from global supplies with the goal of easing an oversupply situation and helping rebalance the oil market.

Barkindo said that in June 2018, “the numbers showed that we had overshot our target. The inventories had actually fallen below the five-year average by thirty-two or so million barrels.”

“When we found we had overshot, to reverse ourselves was a complex decision, and in terms of  implementing it was also complex,” Barkindo said, comparing the action to reversing a supertanker in the ocean.

In June 2018, Saudi Arabia and Russia ramped up production under pressure from Trump to keep oil prices low. The decision was taken in anticipation of a scarcity of oil with the drop in Iranian production due to US sanctions and a decline in crude supplies from Venezuela which is mired in a crisis. Supply also dropped owing to the fact that Libya’s largest oilfield has been offline since it was stormed by armed protesters.

Trump caught many by surprise, however, when he decided to grant sanctions waivers to eight countries that are buying oil from Iran. This, coupled with China’s decision to halt oil imports from the United States in a tit-for-tat trade war, left the market facing a potential supply glut and caused oil prices to plummet.

Al Mazrouei expressed satisfaction with OPEC’s actions in the first half of 2018 noting it had demonstrated discipline. In the second half, however, he was displeased with the fluctuation in the oil price but noted that all other indices were also shaken by a combination of re-imposed US sanctions on Iran and trade tensions between the United States and China.

Trump has in the past attacked OPEC, which he has blamed for higher oil prices. “OPEC is ripping us off,” Trump wrote in a tweet last October when oil prices were at $74 a barrel.

As to what its critics get wrong about OPEC, Al Mazrouei said: “They think nothing has changed.”

On the contrary, he contended, “Russia has changed, we have changed, the producers from the United States have changed as well. No one was expecting that the Canadian producers in Alberta would cut production. It happened!”

“OPEC is not a cartel. OPEC is a concerned group of producers who are going to work with the consumers,” he added.