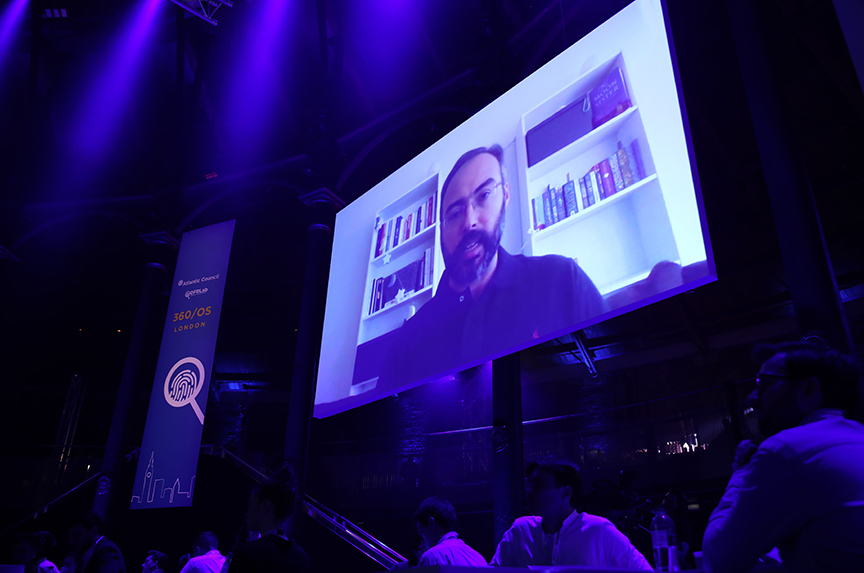 In April, Norwegian security agents informed Iyad el-Baghdadi that he was the target of a threat emanating from Saudi Arabia. El-Baghdadi believes the threat came from the government of Saudi Arabia, Saudi Crown Prince Mohammed bin Salman, and the crown prince’s righthand man Saud al-Qahtani.

El-Baghdadi, a prominent Arab activist, is a critic of the Saudi government, much like his late friend, Washington Post columnist Jamal Khashoggi, who was murdered in the Saudi Consulate in Istanbul on October 2, 2018. He took the threat seriously.

El-Baghdadi says the threats to his life have escalated since his involvement in an investigation into Saudi government Twitter campaigns against Washington Post owner Jeff Bezos since Khashoggi’s murder. The co-founder and president of the Kawaakibi Foundation, El-Baghdadi participated via Skype from Norway in the Atlantic Council’s 360 O/S disinformation conference in London on June 21. He discussed the importance of open source information in covering authoritarian regimes.

It’s not just that authoritarian regimes are opaque, they lie, and they have unlimited resources, he explained. “One thing they cannot stop doing is propaganda,” he added.

When Khashoggi left Saudi Arabia and went into exile it was because “the hammer was just about to fall,” said El-Baghdadi. “In September of 2017 it did. Saudi influencers on social media… were arrested.”

“On the one hand they were actually taking down legitimate voices, but at the same time they were boosting their own fake influencers. They were constructing this propaganda engine in real time,” said El-Baghdadi. “This allowed us to watch the watchers… By looking at their Twitter output we can see what hashtags they are pushing, why they are pushing them, how they are segmenting their audience, how they are pushing different messages in response to real world events, and we can also understand what is important to them and what is not.”

In 2014, El-Baghdadi, who rose to prominence during the Arab Spring pro-democracy uprisings in Egypt and Tunisia, was arrested by authorities in the United Arab Emirates, imprisoned for several weeks without being charged with a crime, and later expelled to Malaysia. In Malaysia, authorities initially refused to grant him entry and he was forced to live at the airport for three weeks before eventually being allowed into the country.

At the start of the Arab Spring in 2011, El-Baghdadi said authoritarian regimes in the Middle East tended to rely solely on traditional media—television, newspapers, and radio—to spread propaganda. As the popular uprisings at the time spread across social media, the regimes quickly realized that that’s where they need to shift their propaganda engine.

In Saudi Arabia, Twitter is more popular than Facebook and by 2012 there was a 3,000 percent increase in the number of Saudi Twitter accounts, El-Baghdadi said. Many of these, he contended, were government propaganda accounts. “The Arab public sphere went from being an offline phenomenon to an online phenomenon,” he said.

El-Baghdadi recalled that Khashoggi had suggested creating an Arab media monitor to detect regime propaganda. “Unfortunately, Jamal was killed before we could get this rolling,” he said.

Khashoggi, himself a prominent critic of the Saudi crown prince, had been living in exile in Washington. On October 2, 2018, he visited the Saudi Consulate in Istanbul to collect a document to certify his divorce so he could marry his Turkish fiancée. He was never heard from again.

The report pinned the responsibility for Khashoggi’s murder on Saudi Arabia. Further, it added, “The special rapporteur has determined that there is credible evidence, warranting further investigation of high-level Saudi officials’ individual liability, including the crown prince’s.”

Saudi Foreign Minister Adel al-Jubeir rejected the report. It was “nothing new,” he tweeted.

El-Baghdadi was forced to go into hiding because he was investigating Saudi government Twitter campaigns against Bezos and possible linkages to The Washington Post’s coverage of Khashoggi’s murder.

Asked by Andy Carvin, a senior fellow in the Atlantic Council’s Digital Forensic Research Lab, how open source researchers can steel themselves to combat disinformation from authoritarian regimes, El-Baghdadi said it was important to work with social media companies like Facebook and Twitter. “Their platforms are basically used as propaganda engines by certain regimes, but they are also used as activist engines by dissidents,” he said.

“Jamal’s murder was one of those things that was very evocative and very emotional… but there are many Jamal Khashoggis,” said El-Baghdadi. “It gives me some comfort to know that his murder really produced this kind of awakening.”

Image: “You cannot cover [authoritarian] regimes the same way that you cover a democracy,” Iyad el-Baghdadi, co-founder and president of the Kawaakibi Foundation, told the Atlantic Council’s 360 O/S disinformation conference in London on June 21 via Skype. (Sarah Halls/sarahhalls.net)