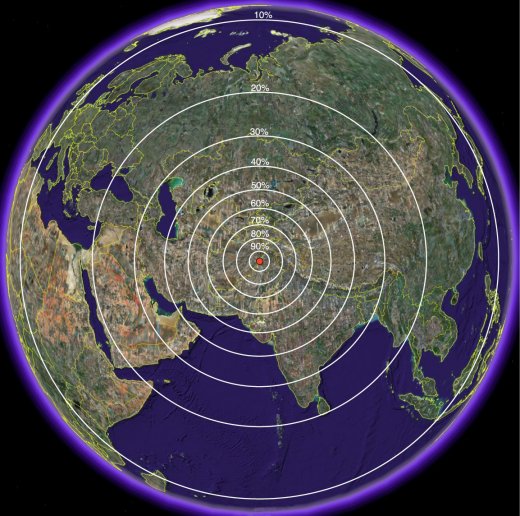 A team of UCLA geographers have narrowed Osama bin Laden’s location to one of three houses in Parachinar.

Using patterns of how animal species spread, the world’s most wanted terrorist can be tracked down to a town in the tribal region of North West Pakistan it is claimed. By factoring in his need for security, electricity, high ceilings to accommodate his 6ft 4in frame and spare rooms for his bodyguards, the search can be further narrowed to three walled compounds.

According to a team led by Thomas Gillespie, at the University of California in Los Angeles, bin Laden’s location is “one of the most important political questions of our time”.

Mathematical models used to explain how animal species spread out say he should be close to where he was last spotted. Their research published in MIT International Review also concluded he should also be in a large town with a similar culture to Afghanistan where he can remain largely anonymous. The most likely candidate is in Parachinar, 12 miles inside Pakistan, which housed many mujahideen during the Soviet invasion of Afghanistan in the 1980s. Finally after looking at his need for electricity for dialysis, high walls, spare rooms for his entourage, and trees to hide from prying eyes, satellite pictures show just three suitable houses.

One presumes authorities will nab him any day now.

The paper, “Finding Osama bin Laden: An Application of Biogeographic Theories and Satellite Imagery” can be downloaded in PDF form here.   Amusingly, this is not the journal’s cover story! For those not enamored of Adobe Acrobat, Joshua Keating has some images and excerpts from the article over at FP.com

Of course, Gillespie and company aren’t foolish enough to have claimed to have actually found bin Laden; it’s just a “thought experiment” applying techniques used for another purpose in a novel manner.   As Noah Schachtman reports,

An Intelligence Community source also warns that the UCLA paper grossly oversimplfies how tricky a terrorist mastermind can be. The geographers use a “distance-decay” model to argue that bin Laden couldn’t have traveled very far from his last known location. They figure that he might be in the Pakistani town of Parachinar. It “has a long history of housing mujahideen,” after all; and “residing near or in a large city should reduce bin Laden’s chances of exposure.”

Well, sure. Assuming bin Laden plays by UCLA rules. But maybe he thinks a rural location is a better place to hide. Or that it’s a bad idea to do something as obvious as stay in a town that traditionally supports militants. “The dude, and [his] methods of hiding are more complex than anyone thinks,” the source tells Danger Room. The UCLA methods “would work if they [al Qaeda] were complete idiots. We would have had him by now.”