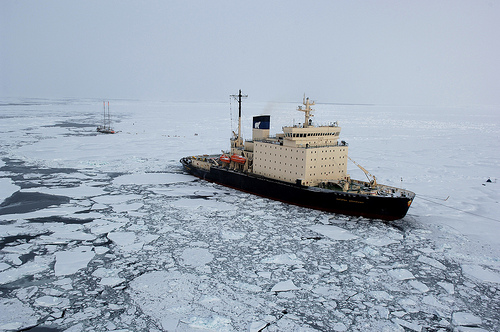 The United States is juggling multiple crises at home and around the world. Operating in crisis mode has meant a lack of attention to over-the-horizon issues, not least of which are in the Arctic, where there is a looming fight for territorial expansion driven by large amounts of untapped oil and natural gas resources in the “High North.”

There is no question that the United States is behind. In 2008, Russia published “Foundations of Russian Federation State Policy in the Arctic through 2020 and Beyond,” which identified the region as a strategic resource base. This document and subsequent military activities such as planting a titanium flag on the seabed and establishing an Arctic Spetsnaz brigade highlight Russian efforts to send a message that the Arctic is an important tenant of their national strategy. Additionally, Russian Foreign Minister Sergei Lavrov has proclaimed, “Russian authorities will defend their national interests in international bodies.”

The lack of a comparable US Arctic strategy and non-ratification of the UN Convention on Law of the Sea makes it seem that the United States is leaving the region uncontested, creating what Michael Klare terms “a very intense geopolitical competition for control over these future resources” in his new book The Race For What’s Left.

The 2010 National Security Strategy offers just one sentence on the Arctic, noting only that “we seek to meet our national security needs, protect the environment, responsibly manage resources, account for indigenous communities, support scientific research, and strengthen international cooperation on a wide range of issues” in the region.

Unfortunately, US diplomatic and legal approaches are falling behind the military, which is slowly filling the strategic void. In April 2011, President Obama approved a change to the Unified Command Plan giving US Northern Command and US European Command responsibility for the Arctic Region. This decision essentially centralized the area of responsibility under two combatant commanders to allow for greater unity of effort. Admiral Jim Stavridis, the outgoing EUCOM commander, has declared “we need to ensure this open space becomes a zone of cooperation, not a zone of confrontation as it was during the Cold War . . . cooperation in the Arctic today . . . can help build trust and focus our efforts in areas of mutual interest to maintain regional security.”

His NORTHCOM counterpart, General Charles H. Jacoby, echoed this sentiment, noting that “emerging Arctic challenges require deliberate preparation to ensure economic access and freedom of maneuver, and to prevent irresponsible actions.”
Despite ceding effective policymaking authority to the military, the United States has, unlike its Russian and Norwegian counterparts, been slow to commit military assets to the region. While there is limited ice-breaking capability in the US Navy and Coast Guard, the United States has unparalleled sub-surface capabilities. With the Unified Command Plan change, Northern Command is expanding its capabilities in the Arctic to focus on communications, domain awareness, infrastructure and presence. None of this amounts to real force projection capability.

Since UNCLOS ratification is unlikely, the United States needs to secure its interests through an Arctic Region Treaty Coalition. Conceptually, the ARTC would binds its members by treaty through an agreement on security. The principal members of ARTC would be the United States, Canada, Russia, Denmark, and Norway (the five coastal states). The coalition would rely on UNCLOS as the basis for negotiations and would leverage lessons learned from the Arctic Council, Treaty of the Antarctic, and initiatives of the International Maritime Organization to begin drafting its charter. The treaty would need to address sovereignty issues and security and natural resource claims while designating the Northwest Passage and Northern Sea Routes as international straits. Lastly, by adding security into the charter, the ARTC would surpass and assume the position of the current Arctic Council, deepening the concept of a regional cooperative partnership. This treaty would be a method for the United States to exercise transparency in the region, settle claims and disputes from a legal foundation, and allow for diplomacy to lead Arctic efforts.

Given sea ice melt and climate change trends, there is a limited window to establish boundaries and avoid a militarized Arctic policy. Four of the five Arctic coastal states (United States, Canada, Denmark, and Norway) are NATO allies, so there are defined mechanisms for dispute resolution. The fifth Arctic coastal state, Russia, has much to benefit from not only resolving resource claims, but gaining access to new sea routes.

The creation of ARTC would provide all parties adequate incentives and mechanisms to work though competing claims. It also gives the United States an opportunity to reset its Arctic strategy. As Stavridis noted, the challenge is for the US “to make sure the area remains high north, low tension” essentially saying that US policy efforts should focus on diplomacy as it moves forward in the region.

William Edwards is a student at the Naval War College in Newport, Rhode Island. These views are his own and do not represent official policy.