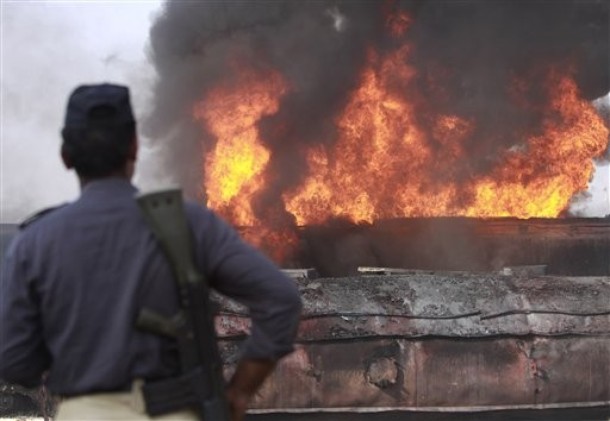 Pakistan has blocked NATO’s primary supply line into Afghanistan in retaliation for an air strike that killed three Pakistani paramilitaries.

Reporting for FT, Farhan Bokhari notes that this will not have an immediate impact on operations but would if the embargo held for long, since "Most of the fuel, food and building materials for the war in Afghanistan is ferried into the landlocked country through Pakistani mountain passes."

Steve Hynd reminds us that pretty much the same thing happened two years ago, for pretty much the same reason.  But the political situation is much different this time.  CSM‘s Jonathan Adams puts it rather mildly when he observes that this turn of events is "testing the already fragile US-Pakistan alliance against Al Qaeda terrorists and Taliban militants holed up in remote, rugged mountain terrain in northwestern Pakistan tribal areas."  Marvin Weinbaum, formerly of the State Department and now with the Middle East Institute, tells NPR‘s Robert Siegel that the "relationship has been fraying for some time now, particularly as our efforts in Afghanistan have gone worse than they had been. There’s no question now that there’s greater pressure to do something about Pakistan, to make Pakistan more of a partner in this counterinsurgency than it has been."  He adds that, while there has been a tacit understanding that NATO troops can pursue Taliban forces into Pakistan from the other side of the border, "the public itself has a very limited tolerance of any kind of cooperation with the United States militarily."

Bernard Finel, a National War College professor and Atlantic Council contributing editor, sees the combination of this development with increasing signs that Pakistan’s generals are working to oust President Asif Ali Zardari, as worrisome, indeed. "If Pakistan chokes off supplied, or even if Pakistan fails to whole-heartedly support our efforts in Afghanistan it is game over."  He adds, "At that point, we need to think in terms of ending the mission and mitigating the consequences, not trying to cludge together some sort of minimal capacity to continue to pursue what, in the best of circumstances, are difficult goals."

In fairness, Finel has thought the game over for some time.  But it is indeed getting difficult to pretend that the United States and Pakistan are allies in this fight.

The reason, as Weinbaum explains, is that the two sides have a very different view of the situation. "The heart of the problem here is that the very people who we have seen as our enemies, like the Afghan Taliban, the so-called Haqqani network, the Hezb-i-Islami, these are all insurgent groups that were fighting in Afghanistan, that these very people are not viewed as the enemy by the Pakistan government."  Instead, he explains, "The Pakistan government has for some time seen these people as a surrogate force in Afghanistan, particularly as they expect the Americans and their allies won’t be there over the long run."

Weinbaum distinguishes, as do most experts in the region, the Afghan Taliban from the Pakistani Taliban, with whom the Pakistani government sees themselves "in a death struggle."  But, from the standpoint of the United States, all these groups are the enemy and part of the same amorphous phenomenon.   And it’s getting very hard to keep pretending that we’re on the same page.

Complicating matters further, the democratically government continues to serve at the pleasure of the military, which  Weinbaum thinks will continue pulling the strings from the outside rather than retaking the reins in a coup.  "There’s really no reason for the military to want to regain formal power. At this point in time, the military gets just about everything it needs. It controls foreign policy. It controls – has a veto over domestic policy that in any way affects its interests. Why at this juncture would it want to take on the formal responsibility, particularly in a country where things have been going so badly?"

At the same time Zardari is getting pressured from the army, he must worry about public opinion, which is increasingly hostile to American strikes that flouts Pakistan’s sovereignty and kill its civilians.   Indeed, General Kiyani can rightly claim the mantle of popular support when pressuring Zardari on these matters.

In this morning’s Washington Post, Karen DeYoung and Karin Brulliard quote a senior Pakistani official on the view of the relationship with the United States fron Islamabad, "On the one hand, there is a genuine comfort level and a feeling of partnership – at least on the surface. But the Pakistan government and military are feeling very frustrated. They feel they are doing all they can in a very complicated domestic setup – a fragile democracy, more fragile after the floods – and that the U.S. doesn’t really care about anything besides [its own] needs. They are not true partners."

And the Pakistani parliament issued a unanimous proclamation condemning yesterday’s attacks and Interior Minister Rehman Malik proclaimed, "we will have to see if they are allies or enemies."

The answer, of course, remains Both.   But it’s getting increasingly hard to play that double game.