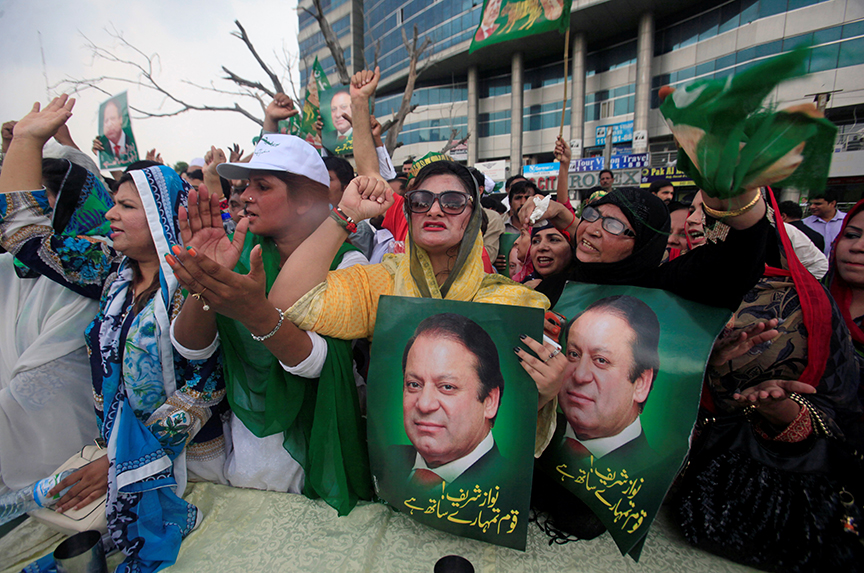 Nawaz Sharif’s supporters in Lahore on July 28 protested the decision by Pakistan’s supreme court to disqualify him from the post of prime minister. (Reuters/Mohsin Raza)

Pakistan is once again in the news with the dismissal of its prime minister, Nawaz Sharif, by the supreme court over a corruption case. This development is not unusual in a country with a history of democratically-elected governments being hobbled by incompetence and corruption. Pakistan has also seen three military coups and has been under military rule for several decades since gaining independence in 1947.

Why do democratically-elected governments fail in Pakistan? Part of the answer lies in the fact that Pakistan’s political parties are dominated by dynasties and lack adequate internal processes, management, and the capacity to develop policy.

Over the past forty years, politics in Pakistan has been dominated by the families of the late prime minister, Zulfikar Ali Bhutto, and the Sharifs. Other families dominate politics at lower levels. In Punjab, Pakistan’s most-populous province, for example, over the past three decades two-thirds of the representatives in the national assembly have belonged to 400 families. This in a country of almost 200 million people.

Corruption, too, is endemic. Most politicians don’t file their taxes and those that do live lifestyles that exceed their reported means.

Furthermore, parliament is dysfunctional. The chairman of the senate repeatedly complains about the slim attendance and absence of ministers and the prime minister from sessions. Important budget discussions are brief and there is little opposition. This is in part because of the 14th amendment to Pakistan’s constitution which gives party leaders the power to dismiss lawmakers who do not vote along party lines.

Prime ministers tend to operate through an inner cabinet of favorites—family members, civil servants, and unelected friends. Policy is made at the prime minister’s whim; projects are implemented without due diligence; international agreements are signed without adequate consideration; loans are signed with no transparency; and public disclosure is limited.

The executive retains the means (inherited from the days of British colonial rule) to corrupt and weaken democracy. The prime minister can, at his or her discretion, award their favorite officials mansions, cars, land grants, and post-retirement jobs.

How can this system be fixed? At a minimum, the prime minister needs to be completely engaged with a functional and independent parliament as well as a consultative full cabinet. No more whimsical policymaking without due process.

Dynastic politics must also end. On this there are several options. For example, electoral systems must be independent of the executive and protected from rigging, and term limits and formalized party systems that allow more in-party democracy must be considered.

Local government, perhaps the most important crucible of democracy but one that has been hamstrung for decades by dynastic politics, should be strengthened to allow communities to realize the benefits of true democracy. Excessively centralized colonial systems must be reformed to allow more room for independent regulatory and watchdog agencies to provide more monitoring and evaluation to the public.

Sharif’s ouster has provided Pakistan with an opportunity to reform its polity. Pakistan must now seize this opportunity.

Nadeem Ul Haque is a former deputy chairman of the Planning Commission of Pakistan. You can follow him on Twitter @nadeemhaque.