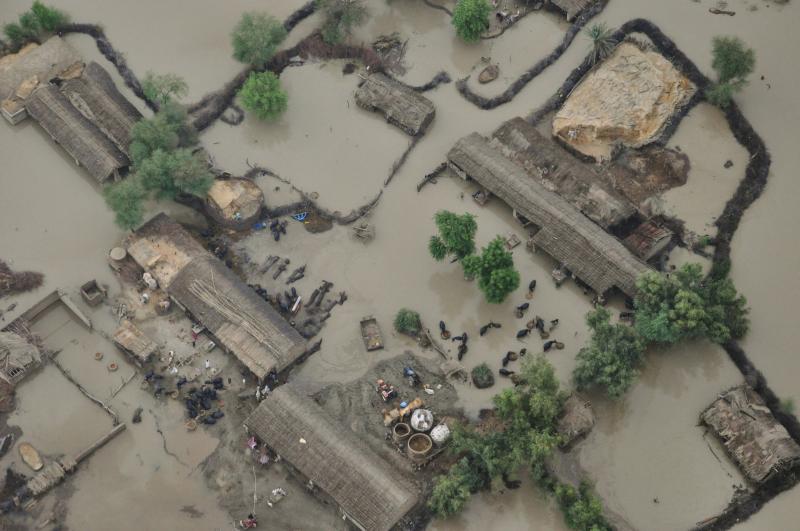 First the country of 180 million was rocked by the flood of thousands of WikiLeaks documents that gave credence to claims that Pakistan isn’t only funding and arming the Taliban insurgency in Afghanistan but is also playing an operational role directing specific attacks against U.S. and NATO forces.

Then, in quick succession, Pakistan was hit by the worst floods in the country’s 63-year history, drowning thousands and stranding almost 3 million people without shelter or food.

Death, destruction, devastation and despair, reported UPI’s South Asian consultant Ammar Turabi, was beyond description. It was the apocalypse. He saw tens of thousands trapped by the floodwaters as he made his way through the Swat valley from Mingora city to Kalam and the Charsadda districts. Desperate people wept as they waded through mud looking for relatives, watched helpless as others were swept away by walls of fast-moving water. Seventy percent of the livestock perished.

No one seemed to know the death toll as overwhelmed authorities were slow to respond. Half a dozen large U.S. helicopters flew in from Afghanistan with Meals Ready to Eat. Islamist militant charities moved faster with food, medicine and tents than the half-paralyzed government of Prime Minister Syed Yousuf Raza Gilani.

Ignoring the national emergency, President Asif Ali Zardari, in yet another blow to his ebbing power and prestige, angered the army and stunned his countrymen.

He flew off to Europe to try to bolster his position by meeting up with his son, 21-year-old Bilawal, an Oxford graduate and legitimate heir to his late mother Benazir Bhutto’s political legacy as head of the Pakistan Peoples Party.

First father and son went in France to visit the family chateau, then met with French President Nicolas Sarkozy before flying over to London for a tense meeting with British Prime Minister David Cameron, with whom Zardari had a large bone to pick.

At the height of Pakistan’s unprecedented natural disaster, Cameron was in India where he accused Pakistan of "looking both ways" in the war on terror, and promoting terrorism by talking to groups carrying out terrorist attacks.

This brought tens of thousands of religious party demonstrators into the streets of Karachi where they set fire to effigies of Cameron. Pakistani Gen. Ahmed Shuja Pasha, the head of intelligence, canceled a planned trip to London. It was also a signal to express the army’s wrath over Zardari’s trip to Britain.

More than 3,000 Pakistani soldiers have been killed fighting Taliban and al-Qaida-backed terror groups in the lawless tribal areas on the Afghan border. More than 8,000 civilians have been killed in suicide bombings in Karachi, Lahore, Islamabad and Peshawar. Religious extremists have shown they can strike anywhere in the country, from the inner security cordon of Bhutto’s rallies in Karachi and Rawalpindi where she was assassinated, to the army’s headquarters in the same city.

Last week in Peshawar, a suicide bomber walked up to the chief of the frontier constabulary as he was getting into his car — and set off his explosive device.

Turabi says the attacks on the military reflect the anger of militants who feel betrayed by the organization that once recruited and trained them.

Since Pakistan opted for the United States after 9/11, it points to its many successes against terrorism, including the capture of Khalid Sheik Mohammed, one of the 9/11 masterminds, and last February, the arrest of Mullah Abdul Ghani Baradar, No. 2 to Taliban supremo Mullah Omar, who is still in hiding.

Yet, seen through Pakistani eyes and ears, whatever they do and no matter how many of their own people are killed, they can never do enough to satisfy American and British demands.

The Pew Global Attitudes Project recently found that 65 percent of Pakistanis polled said they want U.S. and NATO soldiers out of Afghanistan. Only 25 percent said they believe it would be bad if Taliban took over in Kabul again. And half the respondents said they don’t view al-Qaida unfavorably while over half said they believe extremists could take over Pakistan.

Reminder: Pakistan is one of the world’s eight nuclear weapons powers.

Anglo-Saxon frustration with Islamabad is focused on Pakistani reluctance or even refusal to wage war against some Taliban factions, such as the Haqqani Network, which launches deadly attacks in Afghanistan from its bases in Pakistan, or the "Quetta Shura," the leadership council of Mullah Omar, the overall leader of the Taliban guerrilla war against the United States and its 43 allies in Afghanistan.

This is what Britain’s Cameron was referring to when he accused Islamabad of "looking both ways." Pakistan’s military leadership — now the dominant force in the country that is barely governed by a powerless and ineffectual civilian government — sees the situation quite differently.

With the Dutch military contingent, one of only four authorized to undertake kinetic operations against Taliban insurgents, leaving Afghanistan this week (recalled by a vote of the Dutch parliament) and by the departure of the Canadian fighting force in 2011, Islamabad can see the handwriting on the NATO wall.

British participation is highly unpopular in Britain. In the United States, fewer than half the people polled say they favor continued engagement of 100,000 U.S. troops.

Islamabad reckons sooner or later a deal will have to be cut with the Taliban. Originally, this was a group of "Talib" (student) militants trained by the Pakistanis to put an end to the civil war that followed the departure of Soviet troops in February 1989. This was nine months before the collapse of the Berlin wall and the beginning of the end of the Soviet empire.

From 1996, when the Taliban conquered Kabul, until they were chased out by U.S. forces six weeks after 9/11, Pakistan’s Inter-Services Intelligence agency was Taliban’s sole supplier. Islamabad felt secure with what it called a defense in depth against India. And the Pakistanis closed their eyes to the excesses of a medieval regime of religious extremists that was recognized by only two countries besides Pakistan: Saudi Arabia and the United Arab Emirates.

Now Pakistan’s military high command sees that sooner or later the United States and NATO will give up their quest to defeat Taliban — and will be looking for a way out. They reckon, like most American commentators, if the United States is still fighting Taliban in 2012, U.S. President Barack Obama’s chances for re-election will be slim to none.

A reformed Taliban, favorable to the education of girls, and stripped of religious cruelty, is the rabbit some Pakistanis believe they can pull out of the turban.