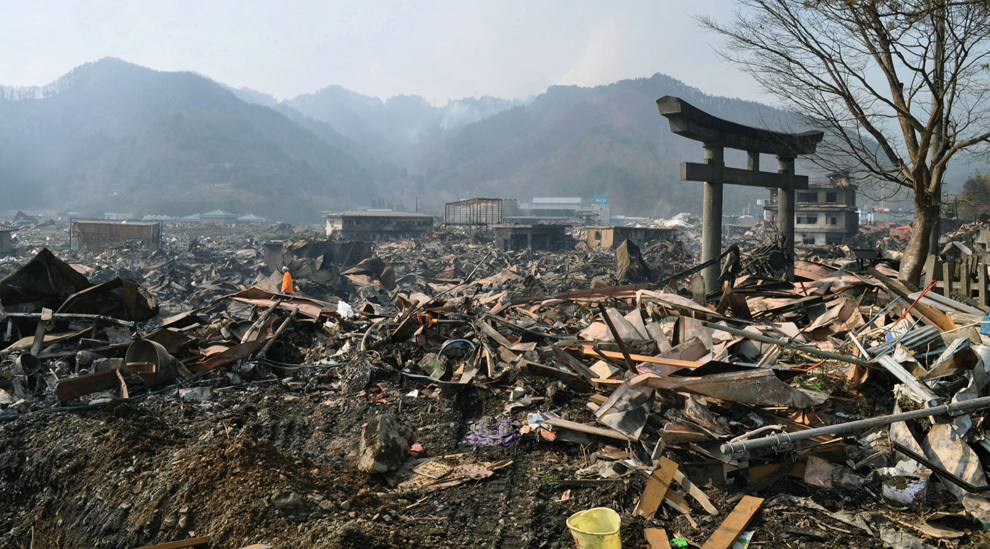 It appeared to be the first global storm since World War II, a commingling of unrelated disasters.

For Japan, it was 9/11-plus, the worst disaster since U.S. atomic bombs leveled Hiroshima and Nagasaki 65 years ago and sealed the end of the second world war in the 20th century.

More than 10,000 Japanese drowned as their homes, automobiles and boats were swallowed by gigantic waves that also left about 300,000 homeless and shivering in a late winter cold snap and 4.4 million without power.

A magnitude 9 earthquake triggered another nuclear disaster for Japan with a series of some 200 aftershocks and meltdowns that left Japan’s Fukushima plant renewing revulsion of nuclear energy in Germany and Japan — and the United States.

The idea of "The Black Swan," the subject of the mega-bestseller by Nassim Nicholas Taleb, describes an unpredictable event of great consequence. This, in turn, requires three attributes, Taleb explained to an interviewer:

1) An "outlier," as it lies outside the realm of regular expectations, because nothing in the past can convincingly point to its possibility;

2) It carries an extreme impact;

3) In spite of its outlier status, human nature makes us concoct explanations for its occurrence after the fact, making it explainable and predictable."

Until last Friday when Planet Earth quaked angrily, an impending Black Swan was believed to be by cognoscenti a new financial crisis that we will face when several European countries default on their sovereign debt and subsequent attention turns to the United States where the federal debt is already out of control — the subject of a new book by Peter Tanous and Jeff Cox titled, "Debts, Deficits and the Demise of the American Economy."

The twin detonators now lie in a convergence of a gigantic tsunami that hit Japan (where 11 out of 54 nuclear power plants are closed, 20 percent of the nation’s power lost with rolling blackouts) and a civil war in Libya where the reviled Moammar Gadhafi took advantage of fearful hesitancy among decision-makers in the United States, European Union and United Nations to restore his 41-year maniacal dictatorship.

What began as a spontaneous revolution in Tunisia in late January triggered, in turn, a civil war in Libya, and violent street demos in Algeria, Egypt, Bahrain and Oman for a chance to partake in democratic self-government.

Alarmed at the daily clashes in Bahrain, homeport for the U.S. Navy’s 5th Fleet, which keeps the Strait of Hormuz safe for 25 percent of the world’s daily oil needs, U.S. President Barack Obama thanked Saudi King Abdallah for pumping more oil. And U.S. Defense Secretary Robert Gates, on his way home from Afghanistan, dropped by Bahrain to boost ruling Sunni morale and show a high-ranking flag.

But there was no mention of Saudi military intervention. The Saudis, on their own, calculated that a military presence in Bahrain would enhance security by deterring Iran from orchestrating a coup with its Shiite friends.

Riyadh also worried that its own Shiite minority in eastern Saudi Arabia might get similar ideas after a recent demonstration.

The United States was informed about Saudi troop movements post-facto; not consulted.

For Iran’s geopolitical theocrats, there was an embarrassment of juicy targets — e.g., Bahrain and common borders with Iraq and Afghanistan.

More than two-thirds of Bahrain’s 900,000 people are Shiite Muslims, hostile to its Sunni royal family and demanding that it agree to abandon an absolute monarchy in favor of a constitutional one, similar to Europe’s reigning families.

Under the banner of the six-nation Gulf Cooperation Council and its joint "Peninsula Shield" forces, some 1,500 Saudi troops in armored vehicles drove the 16-mile causeway that links the oil giant to its tiny ward.

Bahrain has little oil and lives off a normally thriving banking business. Saudi uniforms are bound to be seen by Shiite agitators as occupation troops.

After a few weeks of applauding from the sidelines, there was little left in Western capitals of the moral and strategic imperative for the much-touted collective push toward democracy.

The idea for a no-fly zone over Libya was approved by the Arab League and passed on to NATO, which presumably would be responsible for enforcing it — in effect the United States. The United States then insisted any no-fly zone must get prior U.N. Security Council approval and there both Russia and China had reservations.

Even if approved by all parties, Gates made clear a no-fly zone would require the prior destruction of Libya’s anti-aircraft potential — some 200 French and Russian aircraft and dozens of surface-to-air missile sites as well as mobile SAMs, all sold by Russia.

The bottom line is that the United States has few fighter aircraft that can be spared for what the Pentagon believes would quickly be seen by radicals as an extraterritorial U.S. attempt to defeat an Arab nation and its legitimate government. Moreover, Pentagon planners would like to keep U.S. air assets in reserve in case of need against Iran.

A single U.S. aircraft carrier carries some 75 fighter aircraft. A no-fly zone over Libya would require 200 aircraft to cover the huge territory, according to Gates. The current lack of urgency only favors Gadhafi whose forces are now organizing for a final push on Benghazi.

Arnaud de Borchgrave, a member of the Atlantic Council, is editor-at-large at UPI and the Washington Times.  This column was syndicated by UPI. Photo credit: AP/Kyodo News.