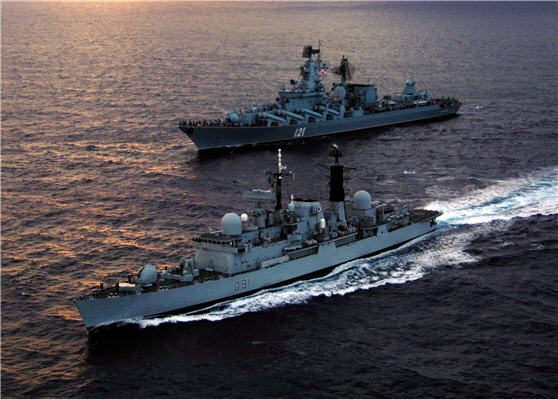 I recently outlined the growing challenge to international commerce and security posed by the burgeoning piracy in the waters off the Somali coast and lamented that it looked unlikely that the international community would muster the political will to confront the underlying causes of the pirate phenomenon. Nonetheless, there may be an upside to the crisis:  An opportunity for Russia and the West to work together.

Last Friday Russian Foreign Minister Sergei Lavrov was quoted in the local press to the effect that Moscow wanted to work with the United States and the European Union to combat the pirate attacks. He acknowledged that the naval vessels of several countries were already present in the area, saying, “It would be useful to coordinate the naval forces that are deployed. It seems everything is leading to this.” (Currently six United States Navy warships have the hijacked vessel surrounded, while the Russian fleet’s most modern frigate, the Neustrashimy, is heading to the scene.) Four days later, Moscow-based analyst Sergei Balashov reported that the Russian envoy to NATO, Dmitry Rogozin, was raising the possibility of joint military action with the Atlantic Alliance against the pirates, while his counterpart at the European Union, Vladimir Chizhov, was saying that Russia would coordinate with the Europeans who have established an operational cell to support surveillance and other protection activities undertaken by individual member states as well as plan a possible naval operation.

Meanwhile in New York, the United Nations Security Council unanimously approved a resolution on Tuesday calling on “States interested in the security of maritime activities to take part actively in the fight against piracy on the high seas off the coast of Somalia, in particularly by deploying naval vessels and military aircraft.” The document authorized forces to use “the necessary means” to counter attacks by pirates. The resolution was originally drafted by France which twice this year has had to dispatch naval commandos to rescue hijacked French yachters and arrest their pirate captors.

All this suggests an unexpected confluence of interests in the Gulf of Aden.

The United States, which has been hunting down terrorists and combating extremism for several years now out of its largest African military base, Camp Lemonier, in Djibouti, located just next door to the failed Somali state, clearly does not want the arms from the hijacked freighter, the MV Faina, offloaded. Nor, given increasing evidence of at least some links between the pirates and the Islamist militants fighting the weak interim Somali government — including al-Shabaab (“the Youth”), which was earlier this year formally designated a “foreign terrorist organization” by the U.S. State Department on account of its al-Qaeda links — does America want to see even part of the $8 million ransom currently demanded paid. And if reports, like the one from the BBC, that the weapons on board the ship were really bound for South Sudan rather than Kenya are true, it is highly unlikely that the Kenyan government would have undertaken the facilitation without at least the tacit consent of some departments in Washington.

Europe and even Canada also have interests at stake. French, Danish, Dutch, and, most recently, Canadian naval vessels have had to be detailed as naval escorts to World Food Programme cargo ships which are the only thing standing between 3.6 million civilians in the region and famine. Furthermore, European ships and passengers are a particularly inviting target for the Somali pirates because of the willingness of their companies — and, reportedly, some of their governments —  to pay ransoms in excess of $1 million for their release. Moreover, the attacks have already forced some of the 16,000 ships which annual travel between Europe and the Middle East and Asia via the Suez Canal to detour around Africa, running up considerably the costs of both petroleum and manufactured goods at a time when the global economy is already faltering.

Russia, perhaps, has the most complex motivations for wanting to tackle the problem. While the Faina’s owner and most of her crew are Ukrainians, two of the kidnapped seamen are Russian nationals as was the ship’s captain who, unfortunately, died of a cerebral hemorrhage during his captivity. The otherwise ineffective “Transitional Federal Government” (TFG) of Somalia is also closely aligned with the Kremlin and, for whatever recognition from such a regime is worth, is one of the few to follow Russia in recognizing the independence of the breakaway Georgian regions of South Ossetia and Abkhazia. The TFG’s envoy in Moscow, Mohamed Mohamud Handule, is reported in energy industry publications as having signed an oil exploration agreement with Russia’s Zarubezh Geologia and to be courting similar deals with Gazprom and Lukoil. Even without any concessions in Somalia, Russia’s increasing engagement in Africa, which I have recently documented elsewhere, make it imperative for it to have safe maritime access to the continent. Finally, while it has been assertive of late in its “near abroad,” Russia’s ambitions to be a major global actor also require it to play the part when other leading powers are acting in concert against a common challenge to the international order.

In short, whether or not developments off the Somali coast in the coming days will signal the beginnings of the type of international maritime peacekeeping which Derek Reveron outlines in an earlier posting, the emerging consensus between the United States, the European Union, and Russia that the threat of piracy can no longer be ignored presents a unique opportunity for some confidence-building exercises after recent rifts. Indeed it is a salutary reminder that, whatever ongoing tensions persist between members of NATO and the Kremlin (see Nikolas Gvosdev’s “NATO Expansion: Time for a Deep Breath”), there are also other areas where international security cooperation is not only needed, but possible. In that sense, the spectacular heist of the Faina could not have come at a more opportune moment for everyone, except perhaps the pirates.

J. Peter Pham is director of the Nelson Institute for International and Public Affairs at James Madison University and a senior fellow at the Foundation for the Defense of Democracies.