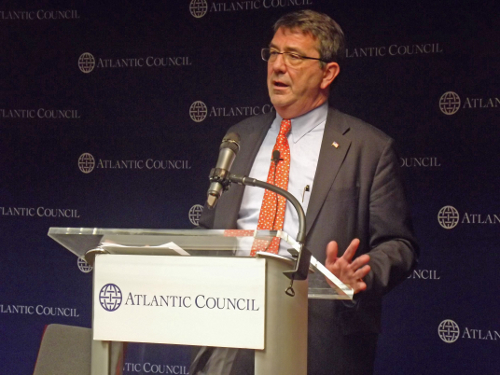 While President Obama’s new defense strategy is pivoting towards Asia, it’s “not a pivot away from Europe in any way at all,” Deputy Secretary of Defense Ashton Carter assured his Atlantic Council audience.

In an address titled “Pivotal Partnerships: The Prospects for International Defense Cooperation in an Age of Austerity” and a question and answer session which followed, Carter was quite blunt about the state of the transatlantic alliance and the new strategic and economic realities in which the United States and its allies find themselves. But he repeatedly emphasized that, in an age of defense austerity, partnership is needed as much, if not more, than ever.

Noting that the Pentagon will take $487 billion in cuts over the next decade, Carter made no bones about it: “Europe will take reductions in force structure.” He quickly added, “So will Texas.” Of course, this analogy is less than perfect. What Texas and other states have to fear is the loss of military bases, defense procurement, and jobs; there’s no strategic pivot away from defending the homeland. By contrast, American troops forward deployed in Europe have for decades signaled that the United States would be there in a fight.

Then again, Carter is absolutely right to note that working with allies will simply be “a fact of life” if future military operations. A smaller American military–particularly in terms of ground forces–means fewer overseas contingency operations, more burden sharing with allies and partners, or both.

Perhaps the most intriguing insight from Carter came during the Q&A, when he declared that the United Sates “has to be open” to buying major weapons systems made in Europe even if it means lost American jobs. He declared, “It’s good for competition and good for technology.” But, he added, “There are still barriers in our administrative system to tapping in effectively and efficiently to what really is a pretty capable, and certainly in some sectors more capable than ours, industrial base in Europe,” he noted. “We know where they are. We would like to work with them. We do work with them.”

Skeptics, myself included, will naturally point to the United States Congress as a barrier to this ever happening. But, as Carter pointed out, the US Army has purchased 345 UH-72 Lakota light utility helicopters from EADS–the European Aeronautic Defence and Space Company, the consortium behind Airbus, Eurocopter, and other brands.

Turning this precedent into practice would be a tremendous step forward in implementing the Smart Defense strategy being advocated by NATO Secretary General Anders Fogh Rasmussen. It simply makes sense for all allies to buy the same tanks, planes, trucks, and rifles to achieve greater interoperability and economies of scale. And American leadership in this area–buying European products when they’re more competitive than our own–would help entice European nations to not only do the same with our products but for countries within Europe to buy from their neighbors rather than bow to insular pressures at home.