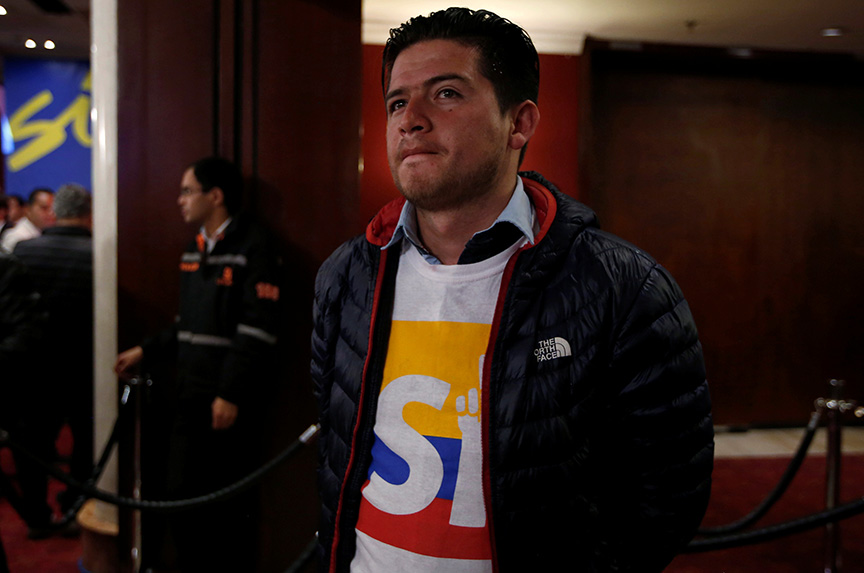 On October 2, Colombian voters rejected a peace accord with the Revolutionary Armed Forces of Colombia (FARC) guerrillas. This was a “surprising” outcome of a plebiscite that has thrown into question the prospects for peace in the country, according to Atlantic Council analysts.

“One could argue that it both complicates and eases this problem,” said Peter Schechter, director of the Atlantic Council’s Adrienne Arsht Latin America Center, referring to the challenge the deal’s rejection poses for the FARC’s leader, Timochenko, to rally his fighters to the cause of peace.

“The way it complicates this problem is that among those who are the most radicalized, you can see an argument in which they say, ‘We will never make peace with imperialists,’” said Schechter.

On the other hand, the rejection sends a clear message to the FARC that there are more Colombians who prefer to get tough with them. The group, which has been militarily degraded over the past few years, “could be facing another round of degradation and military assault,” he added.

In the referendum Colombians narrowly rejected the terms of an accord ending Latin America’s longest-running civil war that has claimed more than 220,000 lives and displaced nearly seven million people. Colombian President Juan Manuel Santos and Timochenko signed the deal at a ceremony last week. However, Santos and Colombia’s friends in the international community gravely underestimated the accord’s ability to garner enough popular support in the plebiscite. [Update: Santos was awarded the Nobel Peace Prize on October 7 in recognition of his efforts to end the war with the FARC.]

The deal’s critics complain that it is too lenient on the FARC.

Santos’ low approval ratings did not help. “The ‘no’ vote is in some ways a referendum on President Santos,” said Jason Marczak, director of the Latin America Economic Growth Initiative at the Atlantic Council’s Adrienne Arsht Latin America Center.

Peter Schechter, Jason Marczak, and Andrea Saldarriaga Jiménez, a Colombian program assistant in the Latin America Center, spoke in an interview with the New Atlanticist’s Ashish Kumar Sen. Here are excerpts from our interview.

Q: Are you surprised by the outcome of the plebiscite?

Schechter: I was surprised by the outcome. A lot of Colombia’s friends overseas had been very optimistic about the prospects of Colombia opening a new chapter in its history. What we, all of Colombia’s friends, failed to sufficiently garner—it is the same failure that the government also is guilty of—was the depth to which Colombians really did not trust the FARC to implement this deal.

There was clearly a sense that this agreement was too generous, but also a sense that the FARC could not be trusted to implement this deal with the same commitment and good faith as the government. We all underestimated those feelings. The result is, after Brexit, another referendum that is a global disappointment. And it is another Western country that has decided to buck the establishment.

Marczak: I am incredibly surprised. Colombia, the entire hemisphere, and the world is shocked by this vote. Every poll prior to the vote had the “yes” vote in favor of peace winning by a two-to-one margin. Nobody could have expected the “no” vote to win by less than 55,000 votes. That shows the fact that in this day and age whenever you put a decision before the people you really cannot expect to know what the opinion is going to be until a vote actually happens.

At the same time, what this vote shows again is that being against something oftentimes helps to turn out the vote more than people being for something. We have seen that across the Western world.

Weather, too, played a factor. Hurricane Matthew hit the Colombian coast in an area where people were more likely to have come out in support of the accord. The hurricane could have been the deciding factor when you have a vote losing by less than 55,000 people.

Saldarriaga Jiménez: It’s also important to point out that victims around the country actually mobilized to vote for “yes.” The results confirm that many war-torn municipalities voted unwaveringly for “yes.” Take Bojayá, for example, a town that faced a terrible massacre and still voted 96 percent “yes.” This is an example of how victims are willing to forgive. Unfortunately, people in these communities have a hard time getting access to transport to get to the polling stations. There is a lack of infrastructure and support in those communities.

Schechter: I would separate this into two parts—economics and politics.

Colombia is a country that has been extremely careful in its economic management. Colombia continues to grow, albeit not enough, and is a country that in 2017 is expected to accede to the OECD [Organization for Economic Co-operation and Development]. This is a great success story of a country with a globalized outlook and a very active private sector. I am confident that Colombia will continue to prosper and grow, and could in twenty-five years find itself much like where Spain was twenty-five years ago.

In politics, it is a completely different story. The politics of Colombia are now thrown into disarray. Elections are two years away. President Santos and his government [on October 2] became a lame-duck government and will now be unable to govern without some type of consensus with the opposition. Former President Alvaro Uribe [a leader of the “no” camp] has really grown in stature.

Marczak: President Santos has said he would work to convene parties across the political spectrum. The degree to which that is successful is still to be determined.

The [government’s] chief negotiator [in the peace process, Humberto de la Calle] has given his resignation to the president taking personal responsibility for the failure of the vote. You have seen markets react unfavorably [to the outcome of the plebiscite].

I think there still is a window open for peace. Uribe has said that he will be willing to discuss issues, but this has to be on his terms. His terms are a very harsh punishment of the FARC. He is against the incorporation of the FARC as a political party. The terms under which he will want to negotiate are really not terms under which the FARC would want to negotiate.

There have been countless setbacks over the past four years. There has been a ceasefire in place for the last month. No side wants to break that ceasefire right now. We will just have to let level heads prevail. It is also incumbent on the international community, which has played an important role so far, to try and break this impasse.

Saldarriaga Jiménez: We need to see what leadership role the president will take. He invited all leaders of the “no” camp to his house. Uribe’s party did not show up. It shows that they are organizing themselves politically. But now is the time for them to present constructive recommendations to the peace negotiations rather than pull back and reorganize their political front.

It is a great sign that the ceasefire still holds, but there is a scenario where [the leaders of the] FARC could lose power among their troops. This is not only about Colombians; it is also about the FARC. As of now, [the FARC] are a hierarchical institution that has control of the forces, but what if different fronts of FARC say they no longer believe in this process or support peace?

Q: Does the setback delivered by the plebiscite complicate Timochenko’s task of rallying the FARC behind peace?

Schechter: One could argue that it both complicates and eases this problem. The way it complicates this problem is that among those who are the most radicalized, you can see an argument in which they say, “We will never make peace with imperialists.”

But you could argue it also eases the argument because the FARC has been severely degraded over the past ten-fifteen years. There are barely 7,000 guerrillas.  They could be facing another round of degradation and military assault. At least half of Colombians certainly believe in a “get tough” solution to the FARC. There is no easy exit for them.

Marczak: It makes everyone’s task more difficult. The “no” vote is in some ways a referendum on President Santos. It was not the intention of the vote. He is unpopular in Colombia right now for a number of reasons, including the economic situation in which the country is in. Just two weeks ago, members of the FARC came together for a conference in which they decided to give up their arms and convert themselves into a political party. This was based on the trust and the confidence that they had in the government and its negotiators that the deal was going to happen and that it was going to move forward.

One implication of the vote is that the FARC may lose confidence in the government’s negotiators. There will be a lot of soul-searching among the different ranks of the FARC on what really should be their best path forward.

As the leaders of the “no” vote, leaders like Alvaro Uribe, have more power over the terms of the negotiations, this will work against the FARC’s interest and ability to find an accord that is of mutual benefit.

Saldarriaga Jiménez: On the political repercussions, we are going to see different parties that don’t support the government stand closer to the government when it comes to the peace deal. Everybody sees that this is a historic opportunity for peace. We are never going to have a perfect agreement. We all understood that it is an imperfect agreement, but one that is better than what we have right now, and that is war.

Q: To what extent is the outcome of the plebiscite a reflection of Santos’ low popularity?

Schechter: Like with Brexit, I think there was a considerable amount of dissatisfaction and disenchantment with the governing elites in Bogotá and with President Santos himself. Because of the collapse of oil prices, oil revenues have vanished and the economy was growing at a far less robust pace. Meanwhile, the president was focused on peace. Some people thought that focus was too much. Santos’ lack of popularity undoubtedly influenced the vote and a lot of people may have seen this vote as a referendum on Santos. That is unfortunate because that was not what it was, but clearly a lot of people thought this was an opportunity to chastise and punish the president and his government.

Q: Will a future peace deal, if there is one, have to include a lot of the demands of the “no” camp? And if that happens what are the prospects of success?

Schechter: It is way too early to speculate about a new peace deal. I was pleased to see that [on October 2] President Santos announced a continuation of the ceasefire and his willingness to meet with the “no” camp. The head of the FARC, Timochenko, said they were committed to peace. Former President Uribe said that he would be willing to talk. I think everybody made the right opening gestures in order not to throw the country entirely off balance. But I think it’s way too early to understand what the long-term ramifications of this are for peace.

I think it puts off to the future an implementation of a formal accord. The formal accord has been signed, but now it has been rejected by the Colombian people. It is hard to imagine how this accord can move forward without some substantial revisions.

Image: An emotional supporter of the “Si” vote in favor of a peace accord between the Colombian government and the Revolutionary Armed Forces of Colombia (FARC) guerrillas is seen in Bogotá, Colombia, after the “No” vote prevailed in a plebiscite on October 2. (Reuters/John Vizcaino)