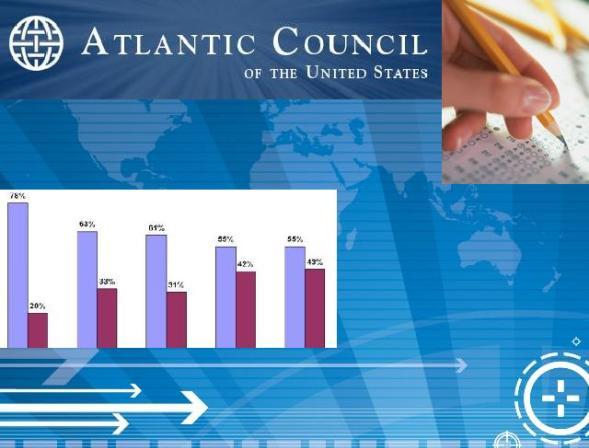 One of the features of our newly revamped website is our Weekly Poll (which tends toward being actually biweekly) asking a current events question and highlighting the differences between U.S. and European respondents.

While we make no pretense that these are scientific — the sample sizes are too small and the respondents are self-selected and therefore non-random — they nonetheless provide a glimpse into the different perspectives our Atlanticists from around the world.

Our most recent poll asked what President Obama’s biggest foreign policy priority should be.  Respondents were given four choices, based on advice that came out of our Foreign Policy Priorities for the Next President series.

While the divergence between U.S. and European and Other citizens tightened as the survey continued into its second week, it was still rather stark.

A majority of Europeans — an even 50 percent — put energy and climate at the top of the list.  No other priority topped 14 percent — with fighting global terrorism, containing rogue states, and solving the global financial crisis each tied with that number.  Americans, by contrast, gave a 40 percent plurality to solving the global financial crisis and ranked climate issues a distant third with a paltry 17 percent.

Perhaps Europeans really do are much more commited to enviromental issues than Americans while Americans are much more interested in economic issues than their transatlantic counterparts?  Or Europeans are focused on the longer term while we’re looking at the here and now?  Or perhaps Americans simply think that accomplishing the other goals will require financial wherewithal.

Interestingly, the main agreement was in giving a low priority to rebuilding ties with Europe.  Whether this reflects a sense that relations are already reasonably good or that they simply don’t matter all that much is not discernible from the results; my instinct tends toward the former.

The combination of the global financial mess and the U.S. elections have pushed Russia off the front pages of the newspapers.   Yet some serious developments— the announcement of missiles in Kaliningrad, the extension of the Russian presidential term and the concomitant concerns about a deepening authoritarianism, and the ongoing wrangling over Russia’s power over it’s Near Abroad, most obviously — continue to unfold.

How should Europe and the U.S. deal with concerns over Russia?

Weigh in with your answers and comments here.