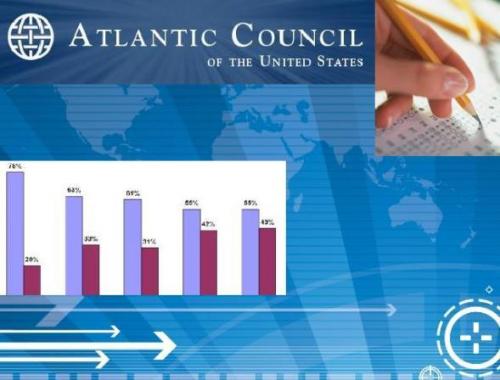 The new Atlantic Council poll is on the obvious topic: The presidency of Barack Obama, which begins tomorrow. Readers are asked to predict what kind of president he’ll be:

Please participate in the poll and the discussion.

Our previous poll, which asked,  Who is most to blame for the current violence in Gaza? generated a tremendous outpouring of voting and commentary, garnering ten times more participation than any of our previous surveys.

The results were astounding: While Europeans were relatively evenhanded, with most giving their support to “Other” or “They are equally responsible,” the overwhelming majority of Americans (88%) said Hamas was to blame.*

At first, I was tremendously pleased with the results, as they greatly bolstered the argument I made in “Transatlantic Divide on Israel Attacks in Gaza.”   As the divide grew more pronounced, however, I began to grow suspicious.   It turns out that turnout was greatly aided by mentions on pro-Israel sites, notably Help Us Win, which encouraged their partisans to weigh in and skew the results.

The fact that the sites had little detectable impact on European participants would still seem to be pretty strong evidence that the “Israel lobby” is decidedly more powerful in the United States than on the other side of the Atlantic.   Still, let’s call the results “wind aided,” since there seems to have been no comparable effort from pro-Palestinian groups to influence the outcome.

_______
*Note: A glitch has reset the results view on the poll, even though the raw votes are still there in the backend.  This is, alas, beyond my capabilities to fix and I don’t expect a response from our technical support folks until tomorrow at the earliest.  I’ll update this post with a graphic once this has been fixed.