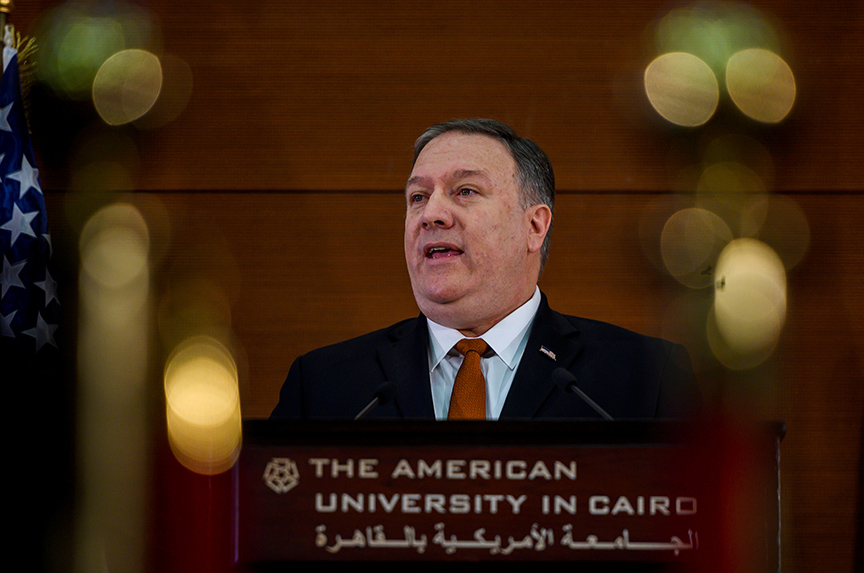 US Secretary of State Mike Pompeo on January 10 repudiated former US President Barack Obama’s Middle East policies while seeking to reassure allies of the United States’ commitment to the region. Ironically, allies have been rattled of late by US President Donald J. Trump’s decision to withdraw US troops from Syria. This decision, Pompeo insisted, is not a change of mission.

“Let me be clear, America will not retreat until the terror fight is over,” Pompeo said in a speech at the American University in Cairo, adding that the United States “will labor tirelessly alongside you to defeat ISIS, al Qaeda, and other jihadists that threaten our security and yours.”

Describing the United States as a “force for good,” the secretary said: “For those who fret about the use of American power, remember: America has always been a liberating force, not an occupying power, in the Middle East. We’ve never dreamed of domination. Can you say the same of the Iranian regime?”

We reached out to Atlantic Council analysts for their reactions to the speech. This is what they had to say:

“Secretary Pompeo’s speech will be greeted with dismay—although not surprise—from most of the Middle East. It concentrated mainly on the old tropes of terrorism, the perceived threat posed by Iran, and support for Israel and offered little hope for a region where economic difficulties and lack of freedoms remain the priority for most people.

“From a Lebanon perspective, Pompeo’s several references to Hezbollah will be regarded with some unease, even from the party’s opponents. Lebanon is on the edge of a serious economic and financial hardship and its quarreling leaders have failed in eight months to form a government that can tackle the crisis. If the Trump administration begins to view Lebanon solely through the lens of confronting Hezbollah as part of its anti-Iran strategy, it could aggravate existing political divisions and bring Lebanon closer to economic collapse.”

Rachel Brandenburg, director of the Middle East Security Initiative at the Atlantic Council’s Scowcroft Center for Strategy and Security

“Nearly ten years ago, when President Obama delivered a major policy speech from Cairo, his primary audience was the Muslim world. He acknowledged tensions with the United States and declared a ‘new beginning’ based on mutual interest and mutual respect. Neither his speech nor the policies that followed were without fault. He had the significant challenge to meet heightened expectations of his then relatively new administration, and match words with actions. Secretary Pompeo’s speech today did not seem to have a clear audience, beyond the administration’s domestic base and possibly some regional heads of state. It seemed to be a defense of the Trump administration’s achievements and stated policy objectives—and certainly a rebuke of President Obama’s—but which directly contradicted President Trump’s recent statements or policy decisions, such as on withdrawing from Syria or defeating ISIS, or will likely be unachievable, such as being able to ‘expel every last Iranian boot’ from Syria.

“But whereas President Obama set expectations higher than his administration was able to meet, expectations of President Trump’s ability to follow through on or achieve their foreign policy objectives is already pretty low, and nothing about this speech is likely to change that. In this case, ironically, this may be Secretary Pompeo’s strongest advantage.”

Holly Dagres, nonresident fellow with the Middle East Security Initiative at the Atlantic Council’s Scowcroft Center for Strategy and Security and the editor of the IranSource blog

“After President Donald Trump’s decision to pull US troops out of Syria, Secretary of State Mike Pompeo and National Security Advisor John Bolton are on a regional damage-control tour—with Pompeo’s Cairo speech as the headliner. The Trump administration continues to support Israel’s actions in Syria, while dangling the possibility of helping to rebuild the country as an incentive to push Iran out. Even if Bashar al-Assad were to agree to ‘expel every last Iranian boot,’ how can the United States take the Syrian government for its word? Syria was supposed to destroy all its chemical weapons, and we saw their continued use. This is all tough talk from the Trump administration with little plan of action.”

“In addition to what many will describe as the disconnect between the Trump administration’s willingness to invest resources and its grand stated ambitions for the Middle East, the question remains of the intended audience for Mike Pompeo’s speech. To whom was the 25-minute speech addressed? Certainly not the people of the Arab world who are increasingly wary of both their autocratic leaders and their US patrons. Washington has so frequently upended lives of those in the Middle East with wars and other crises that few ordinary people would take seriously Pompeo’s claim that America is a force for good.

“Some may argue that the speech was an exercise in hand-holding, an attempt to reassure nervous Arab and Israeli leaders and warn adversaries in Moscow, Tehran, and elsewhere that Washington isn’t retreating from the Middle East.

“But after the recent gyrations and contradictions from Washington, and the air between Trump and his senior deputies, few wily Middle East leaders would lend much credence to Pompeo’s words, dismissing them as Turkey recently dismissed those of National Security Advisor John Bolton.

“Most likely, the speech was aimed at the only constituency that Pompeo cares about: the network of hawkish right-wing think tanks, lobbyists, and fundraisers from which he himself hails, and to which he likely owes his allegiance, and will depend on for a job once Trump or American voters tire of him.”

“There’s some truly bizarre messaging in Pompeo’s speech—not to Egyptians, nor to Arabs writ large. No one is going to take his speech as indicative of American policy per se because it has become clear to everyone that American policy can change by the stroke of a keyboard—in other words, a tweet from Donald Trump.

“It’s rather amusing to see the focus on Iran, from a Cairo suburb—Egypt doesn’t have concerns about Iran in the same way as Washington. Ironically, few in Washington or out of Washington really take seriously the notion of ‘the Middle East Strategic Alliance’ (the so-called Arab NATO) —and one would have thought Pompeo would have realized that by now.

“Pompeo used this speech to encourage the normalization of Israel in the region—but said virtually nothing about why that normalization is problematic and why the problem exists—namely, the occupation and siege of the Palestinians.

“Clearly, when Pompeo insists that ‘America is a force for good in the Middle East’ or ‘America has always been a liberating force, not an occupying power’ he’s not thinking about a local audience at all, which generally associates American foreign policy as being responsible for invasion and occupation, for supporting autocracy and occupiers, and being high on great rhetoric about fundamental freedoms and low on calling out abuses. I doubt the local audience was interested in pot shots at Obama’s speech in 2009, but I am sure it will be appreciated in the Trump administration and by Trump’s base.”

“The obvious comparison is with President Obama’s Cairo speech. I expected this to be the Trump administration’s version of a speech to the Arab-Muslim world. I was mistaken. The content of the speech—the essentialist explanation for extremism, the unapologetic tone on US policies, and the overall positive attitude toward Arab regimes—are all at odds with general public sentiment. As is Secretary Pompeo’s repudiation of President Obama’s call for a new Middle East and reimagining Arab-US relations. The harsh tone on Iran will not necessarily be unpopular, but this isn’t really the central problem in most Arabs’ lives.

“Of course, the Obama administration was not popular among Arabs either, but that was largely because its policies did not match its rhetoric. The rhetoric itself was for the most part in line with regional aspirations. I can only conclude that the Pompeo speech is not directed at the regional population but at its (quite unpopular) regimes.”

Nader Uskowi, nonresident fellow with the Middle East Security Initiative at the Atlantic Council’s Scowcroft Center for Strategy and Security

“Countering malign activity by Iran and the Shia militias under its control in Iraq, Syria, Lebanon, and Yemen is the focus of US policy in the Middle East. That was a key takeaway from Secretary Pompeo’s speech in Cairo.

“Pompeo singled out harsh economic sanctions as the United States’ strategy to stop Iran and its Shia militias in the region. But if Iran and its proxies pose such a threat, why is the United States withdrawing its forces from Syria, arguably the epicenter of Iran-led military activities in the region? Rhetoric and sanctions will not stop Iran’s Revolutionary Guards, the Lebanese Hezbollah, Iraqi Shia militia groups, Afghan militants, and the like. They will remain active and truthful to their militant ideology even after the current conflicts in the region subside.”

Image: “We remain committed to the complete dismantling of the ISIS threat and the ongoing fight against radical Islamism in all of its forms,” US Secretary of State Mike Pompeo said in a speech at the American University in Cairo on January 10. (Andrew Caballero-Reynolds/Pool via Reuters)