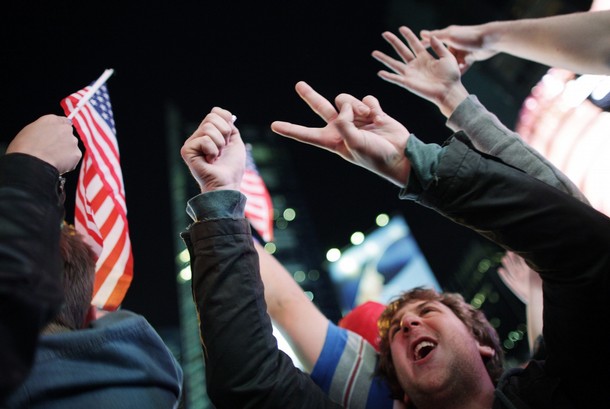 Osama bin Laden is dead, radio stations are playing tough-sounding Toby Keith and patriotic Lee Greenwood songs, and the Washington Nationals are even giving away free tickets to military members, in a broad-based gesture of gratitude for 10 years of dogged pursuit of the terrorist rogue. Pundits are deconstructing the raid and its planning to outlandish levels of detail, and some are even declaring the raison d’etre for the U.S.military and civilian mission in Afghanistan to be an expired mandate. Even sports talk radio has interrupted its usual blather about the athletic crisis of the day to focus on the successful raid on Osama bin Laden’s compound in Abbottabad, Pakistan. It is like the bicentennial, a Presidential inauguration, and V-E Day, all rolled into one. Before America gets carried away on the winds of triumph, we need to take a deep breath and unpack what has been accomplished, the strategic second order effects, and the task that remains before us.

The killing of bin Laden will prove to be little more than a first down in an epic championship football game – a game which has an unknown score, will last an indeterminate number of quarters, and will be played at an unknown cost to the team owners, coaches and players. The popular media is abuzz with calls to bring the troops home, irrespective of the strategic judgments which require U.S. and allied support to the Afghan government – to develop a functional, stable government that manages the national economy, provides essential services to its citizens, and exercises a monopoly on violence within its borders – and which therefore provides an inhospitable sanctum for transnational terrorists. In the era of persistent conflict, the U.S. must be wary of a penalty flag for excessive and premature celebration. National pride in the destruction of a murderous and sworn enemy of the state and our society is natural and even commendable. We must take pains to ensure it is kept in perspective. In the words of Winston Churchill, this is not even the beginning of the end, but perhaps the end of the beginning.

Moreover, we must collectively consider the risk that bin Laden’s killing poses in the context of the Arab Spring. As freedom and possibility roil the cauldron of repressive and stricken societies from Tunisia east to Bahrain, and from Yemen north to Syria, governments like that of Pakistan, suffering from a legitimacy deficit, are candidates for popular resistance. Especially in the case of Pakistan, such instability could be catastrophic. First, let us be crystal clear about what occurred: the United States inserted a special operations team under CIA operational control to conduct a covert action (a raid) over 100 miles deep into the sovereign territory of Pakistan, well beyond the “normal” strike range of Predators and their Hellfire Missiles in the FATA and Northwest Territory. This raid struck a city just a few miles north of the capital city of Islamabad, resulting in the death of a Muslim inhabitant under the theoretical, if not explicit, protection of the Pakistani government. The raid was roughly the equivalent of a Mexican army hit squad flying 100 miles into Arizona to kill a member of a drug cartel seeking refuge in Tucson – it clearly constitutes a serious incursion onto the sovereignty and an affront to the authority of an admittedly erratic ally – one with at least a couple dozen sets of nuclear weapons components and 180 million residents who are skeptical of, if not hostile to, the Zardari government. In the milieu of political unrest generally sweeping Muslim North Africa and Asia, bin Laden’s death and the American raid, whether undertaken with the Pakistani government’s consent, over the government’s objection, or without its knowledge, could serve as a catalyst introducing unprecedented and extraordinarily dangerous instability into South Asia.

American euphoria over bin Laden’s death is a rational reaction to the elimination of the face of radical Islamism. Bin Laden’s adherents will doubtless seek revenge, if such retaliatory plans are not already in the early execution stages. We must, as a nation, take careful stock of what bin Laden’s death means in the continuing struggle against radicalism and consider concepts for mitigating instability in volatile regions.

Butch Bracknell is a lieutenant colonel in the U.S. Marine Corps.  A career military lawyer, he is a Senior Fellow at the Atlantic Council. Small Wars Journal also published this essay. Photo credit: Reuters Pictures.