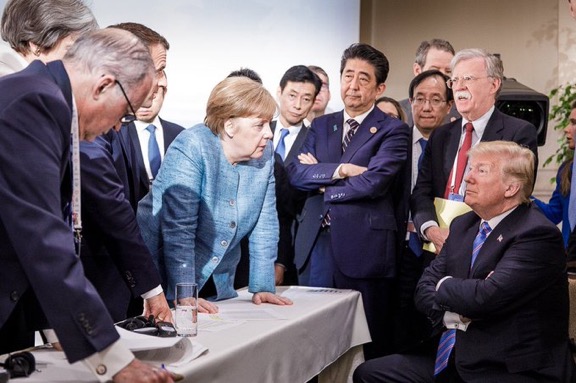 The crucial question for the Trump era was posed this week by Donald Tusk, the past Polish Prime Minister and current European Council President, whose country sacrificed so much to join the rules-based global order he fears President Trump is endangering.

Are the US withdrawals from the Paris climate agreement and the Iran nuclear deal, Tusk asked in the New York Times, and now President Trump’s new tariffs on steel and aluminum, levied against allies on national security grounds, “merely seasonal turbulences or rather the first symptoms of the breakup of the Western political community.”

Put another way: Are we watching just another episode of the ongoing Trump drama that we now know so well? The real estate mogul, and now Commander-in-Chief, deploys disruptive tactics to seek maximum negotiating leverage before walking back from the precipice of failure to close the deal?

Or are we witnessing the US-provoked unraveling of the global order of systems and institutions so painstakingly built after World War II? Though flawed and in need of remodeling, that construct has protected American interests and brought an unprecedented level of global peace and prosperity over the past seven decades.

The Economist puts its answer on the weekend cover (see here), with Donald Trump gleefully riding a wrecking ball, which on closer inspection turns out to be the earth, under the screaming headline, “America’s Foreign Policy.”

Inside the magazine in an article entitled “Demolition Man,” the Economist concedes Trump may achieve some outsized gains along the way – a peace and denuclearization deal with North Korea, a potential solution to avoid a US-Chinese trade war and, it even ventures, perhaps Iran regime change.

Such striking achievements would be remarkable from a man “who exults in breaking foreign policy taboos,” the Economist writes. “But are they likely? And when Mr. Trump seeks to bring them about with a wrecking ball aimed at allies and global institutions, what is the balance of costs and benefits to America and the world.”

Inflection Points has often given President Trump the benefit of the doubt.

However, President Trump crosses a dangerous line when his unconventional tactics do lasting injury to allies and alliances, assets the US uniquely enjoys among major powers. World order is difficult to achieve and even harder to restore once lost.

Canadian Prime Minister Justin Trudeau was right as the G7 gathered this week when he said that Trump’s tariffs, based on the idea that his country was a national security threat, were “quite frankly insulting and unacceptable.” President Macron may be correct that the tariffs are “illegal,” a premise that will be tested at the World Trade Organization.

However, the criticism that should sting President Trump most is that the tariffs on Europe, Mexico and Canada aren’t smart. They open the floodgates for other countries to use specious national security arguments to close markets, they raise US consumer costs, and they already have triggered countermeasures that stir up even more disunity.

President Trump rubbed salt in allied wounds Friday when he argued that Russia should be let back into the G-7, making it again G-8, although Moscow was removed after its illegal annexation of Crimea, alongside a litany of other misdeeds. So even as he punishes allies on trade, he wants to lift this penalty on Russia for its threats to the global order. The US side even objected to using the term “rules-based international order” in the G7 communique, boilerplate language.

One of the Atlantic Council’s founders, Dean Acheson, wrote the book, “Present at the Creation,” which tells the story of how America built a new world after Nazi Germany’s fall. The question worth asking as the Trump administration goes deep into its second year is whether the President’s legacy will be one of being “present at the destruction” of what was so painstakingly built. Or could we still work together with friends and allies to be “present at the reinvention”?

President Trump has demonstrated skill at shredding practices and structures he doesn’t like, an approach that he’s recently accelerated. What he hasn’t yet shown is the architect’s skill of building something better in their place.

That’s curious, given the fact that any real estate developer recognizes that those who build sturdy and resilient structures are more likely to achieve legacy than those who merely tear down.

This week’s Singapore talks with North Korea’s Kim Jong Un may provide a good opportunity to replace the wrecking ball with some cranes and scaffolding. To his credit, he has thus far kept his Japanese and South Korean allies close in the run-up to the summit, in contrast to how he has worked with Europe and Canada ahead of the G7 meeting.

Trump may then want to bring his developer’s tools to Europe for the NATO Summit in July.  Damage has been done, but it’s not too late to repair and remodel. First, however, President Trump needs to recognize that the stakes are of historic proportions.