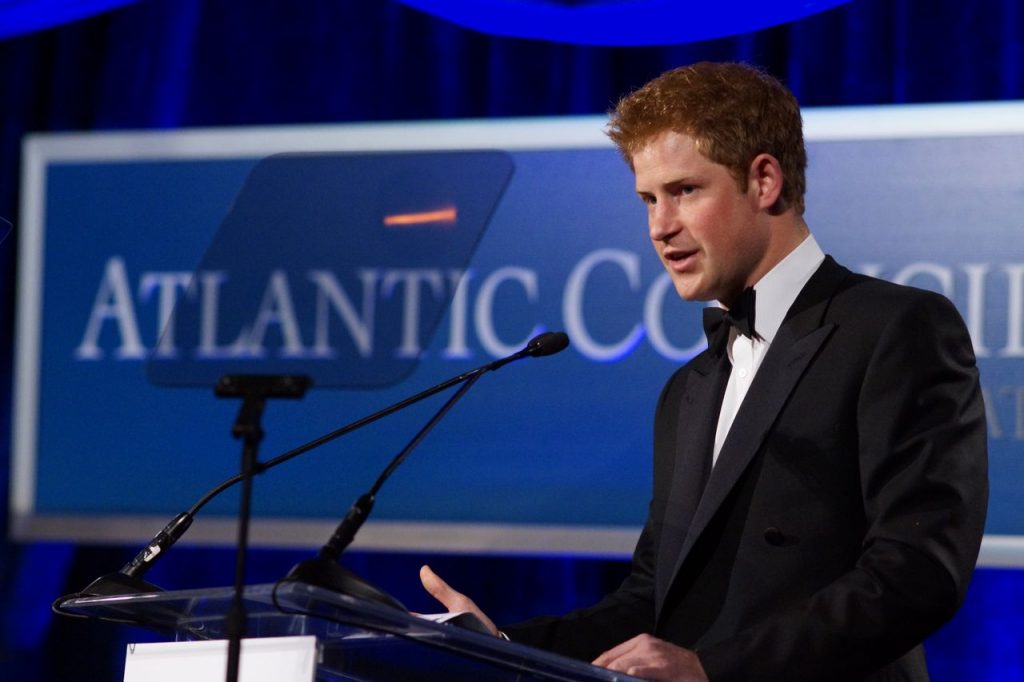 Prince Harry of Wales paid tribute to the wounded veterans of the transatlantic Alliance, noting that, “They have paid a terrible price to keep us safe and free.”
He made these remarks at the Atlantic Council Awards Dinner, where he accepted the Distinguished Humanitarian Leadership Award “on behalf of my brother, William, our Foundation, all those on both sides of the Atlantic who work so tirelessly to support our wounded veterans. But particularly for the guys.  This is their award.”

Harry was introduced by General Colin Powell, the former US Secretary of State and Chairman of the Joint Chiefs of Staff–himself a previous awardee of a Distinguished Leadership Award–who joked that having “Captain Wales” on the program “lowered the average age of the room by twenty-five years.” And, indeed, despite an impressive array of awardees over the years that included heads of state, war heroes, and rock stars literal and figurative, this was the first Atlantic Council Awards Dinner with throngs of teenage girls mobbing the hotel.

Harry took the podium by joking, “This isn’t daunting at all!” And observing,  “For a captain in the British Army to be introduced by such a world-renowned soldier and statesman is truly humbling and a little terrifying.”

But the subject of the speech was a serious one, exemplifying why a man so young was receiving an award usually given to someone decades older: “The guys.”

The man who commanded a platoon of Blues and Royals in Afghanistan and recently completed training to fly Apache attack helicopters declared, “It would be wrong of me to speak for these heroes, but not presumptuous of me to pay tribute to them: so many of our Servicemen and women have made the ultimate sacrifice; so many lives have been lost and so many changed forever by the wounds that they have suffered.  They have paid a terrible price to keep us safe and free.”

Consequently, “The very least we owe them is to make sure that they and their brave families have everything they need through the darkest days – and, in time, regain the hope and confidence to flourish again.   For these selfless people, it is after the guns have fallen silent, the din of battle quietened, that the real fight begins – a fight that may last for the rest of their lives.”

Harry pointed to a sad fact of history, noting that, “sooner or later the coverage of them in the media will diminish or cease as coalition forces withdraw from Afghanistan.   They will no longer be at the forefront of our minds.  But the injuries left from a 7.62 bullet, an IED, watching a fellow comrade injured or killed—these are experiences that remain with you for life, both physically and mentally.”

Therefore, he urged, “We must be there for our Servicemen and women, and their families, standing shoulder to shoulder with them always.” And, turning to the spirit of transatlantic cooperation at the foundation of the Atlantic Council mission, he added, “British and American forces train together, fight together and, tragically, some are wounded and some die together.  It makes perfect sense to me, therefore, that we should wherever possible and appropriate work together, by pooling our expertise and experience, to heal and support the wounded veterans of both our Nations – truly, brothers and sisters-in-arms.”

Indeed it does. The advances in combat medicine in recent years have been truly extraordinary. The combination of faster and more effective treatment has saved countless lives in Iraq and Afghanistan. Prosthetic limbs are radically better, too, although by no means where we’d like them to be.  War serves, sadly, as a kind of laboratory for medical research, as the types of injuries received in combat–which are, after all, usually inflicted intentionally–are unique. So, surely, sharing new knowledge and techniques speeds up the development curve.

Perhaps where that pooling is most needed is in the diagnosis and treatment of post traumatic stress. Because we’ve gotten so much better at treating physical wounds, there are more survivors than ever with emotional ones. They’re perhaps even more likely in the oddly personal sort of wars in which our forces have been engaged in recent years. And, sadly, military culture has been slow, indeed, to recognize emotional injuries as real.