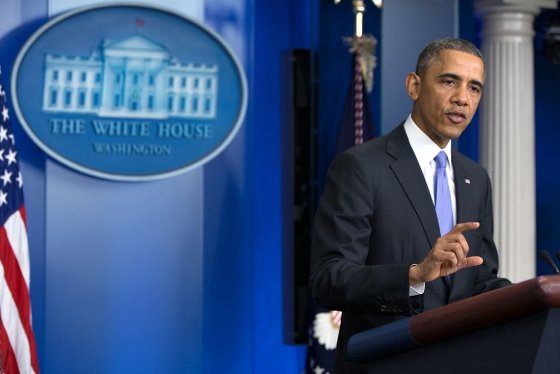 Talks between six world powers and Iran resume next week in Geneva but the real drama may be occurring elsewhere as the United States tries to reassure Congress and nervous allies that an emerging deal is better than no agreement.

President Barack Obama, already under attack domestically for the bumpy rollout of his signature health care initiative, is trying to convince hawkish members of Congress to hold off on new sanctions against Iran while the Geneva talks hold a chance for success.

At a press conference Thursday, Obama noted that sanctions already in place had helped bring the Iranians back to the table with a more realistic attitude. The U.S., he said, was offering only “modest relief at the margins of the sanctions that we’ve set up” in return for Iran freezing and rolling back some elements of its nuclear program for six months. “If it turns out six months from now that they’re not serious, we can crank — we can dial those sanctions right back up,” Obama said.

The drama is now in the Senate, where Democratic leaders are trying to block quick action on new sanctions legislation. In the past, sanctions advocates have attached such measures to a must-pass bill authorizing annual defense spending. As of this writing, it appears that the defense bill will not come up for a vote before Thanksgiving, allowing next week’s talks to go forward without that added complication.

If new sanctions pass now, that could make it more difficult for Iran to accept a deal that requires concessions regarding their nuclear program. However, Obama’s soothing words appear to have had little or no impact on the government of Israel. Israeli Prime Minister Benjamin Netanyahu has described the reported offer to Iran as a “historic mistake” because it would leave intact much of Iran’s nuclear infrastructure – albeit with greater monitoring by the International Atomic Energy Agency (IAEA) to verify Iranian pledges not to enrich uranium to weapons grade and major restrictions on a heavy water reactor that could produce plutonium, another potential bomb fuel.

A new report by the IAEA on Thursday showed that Iran has significantly slowed the advancement of its nuclear activities, adding only four new centrifuges to its facilities in the past three months and remaining below an Israeli “red line” of 240 kilograms of 20 percent enriched uranium – sufficient, if further purified, to make a nuclear weapon. Iran also did little to advance the controversial heavy water reactor under construction at Arak. However, what many saw as a positive signal from Iran, Netanyahu dismissed. He said he was not “impressed” since “Iran does not need to expand its program because it already possesses the necessary infrastructure for building a nuclear weapon.”

Others nervous about a potential breakthrough in Geneva include Saudi Arabia, which is already angry at President Obama for failing to go through with threats to bomb Syria after that country’s government killed more than 1,000 Syrian civilians with chemical weapons. Other Arab states on the Persian Gulf such as the United Arab Emirates fear that now that U.S. diplomats are talking directly to Iranian officials in an almost routine manner, the United States will shift the pattern of alliances forged with Sunni Muslim countries in the aftermath of Shi’ite Iran’s Islamic 1979 revolution.

Both the Arabs and the Israelis chafe at the fact that they are not in the room in Geneva negotiating alongside the United States, the five permanent members of the UN Security Council and Germany (the P5+1). Even within this grouping – a legacy of the days when the U.S. and Iran did not meet alone — cracks have appeared that reflect irritation with U.S. policies. French Foreign Minister Laurent Fabius infuriated Secretary of State John Kerry last weekend when he emerged from the talks at one point to declare that what was on offer was a “sucker’s deal” and suggested that France would take on the burden of toughening the terms.

That kerfuffle – which may have had something to do with Obama leaving France out on a limb over military action in Syria a few months ago — appears to have been smoothed over and U.S. officials now insist that the P5+1 are all on the same page. But underlying the tensions is the fact that if an agreement is reached, it could have a profound effect on U.S.-Iran relations and lessen U.S. reliance on some of its old allies.

There is no doubt that Obama’s policy toward the Middle East has exhibited “a lot of doubt and hesitancy,” according to Ross Wilson, a former U.S. ambassador to Turkey who is now at the Atlantic Council. The Obama administration has seemed “to lurch from one set of problems to another” and has had difficulty articulating “a coherent vision” for the region, Wilson said Friday to the national conference of World Affairs Councils of America in Washington.

But the “policy choices are extremely difficult,” Wilson noted, and the Middle East keeps changing in ways that even the world’s lone superpower cannot possibly control.

With much of the Middle East in turmoil, the status quo simply will not hold. Some shift in U.S. policies is inevitable as it withdraws from two costly wars and finds itself in the unexpected position of the world’s largest oil producer. A nuclear agreement with Iran would reduce the chances that the United States will go to war again and could bring other benefits for regional conflicts in Syria and between Israel and the Palestinians. But it also brings uncertainties that will be hard for all the parties – in the room in Geneva and outside – to adjust to in the short term.