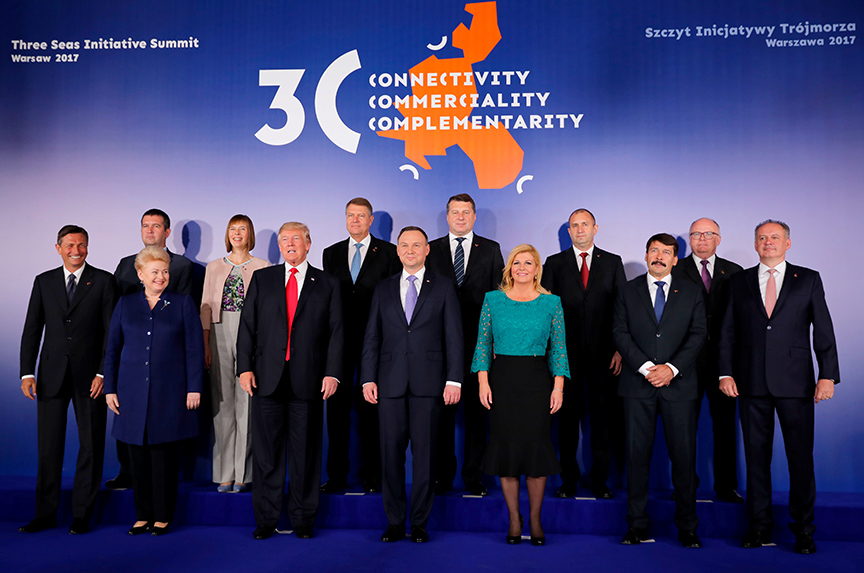 US President Donald J. Trump, Polish President Andrzej Duda, and Croatian President Kolinda Grabar-Kitarovic posed for a family photo along with other heads of states and delegates during the Three Seas Initiative Summit in Warsaw, Poland, on July 6, 2017. The next summit will be held in Bucharest on September 17 and 18. (Reuters/Carlos Barria)

Romanian President Klaus Iohannis will host leaders from a dozen Central European nations in Bucharest on September 17 and 18 for a summit that provides the opportunity to increase the region’s prosperity and energize its decades-long quest to fully integrate with the West.

The focus of the summit is the Three Seas Initiative (3SI), an effort to accelerate the development of Central European cross-border energy, telecom, and transport infrastructure. The initiative includes those European Union (EU) member states that lie between the Baltic, Black, and Adriatic Seas. The presidents of Croatia, Poland, and Romania have championed the 3SI—previous summits have been held in Dubrovnik (in 2016) and Warsaw (in 2017).

The 3SI’s strategic rationale is that development of cross-border infrastructure will help increase economic connectivity among Central European states and between the region and Western Europe. This will stimulate regional economic growth that will benefit Europe as a whole. An expansion of regional energy links, including coastal energy terminals, pipelines, and grids, will diversify supplies and increase availability across Central Europe. These are two key ingredients necessary for greater energy security and the development a single European energy market. Additionally, state-of-the-art telecom infrastructure can help Central Europe leapfrog a digital divide that separates it from Western Europe and expand access to global markets. All this promises to generate greater European prosperity and economic resilience in a world of increasing regional and global economic volatility.

US President Donald J. Trump’s administration has strongly endorsed the 3SI. In July 2017, Trump attended the Three Seas Summit in Warsaw and spoke expansively about the potential of the initiative, which he said would “transform and rebuild the entire region and ensure that your infrastructure, like your commitment to freedom and rule of law, binds you to all of Europe and, indeed, to the West.” He added that “greater access to energy markets, fewer barriers to energy trade and development, and strengthening energy security is what we’re looking to do. The Three Seas Initiative has the potential to accomplish all of these essential objectives.”

The US president also underscored the transatlantic interest in the 3SI, explaining that “the Three Seas Initiative will not only empower your people to prosper, but it will ensure that your nations remain sovereign, secure, and free from foreign coercion. The Three Seas nations will stand stronger than they have stood before. When your nations are strong, all the free nations of Europe are stronger, and the West becomes stronger as well.”

Trump’s personal commitment added momentum to the 3SI. He urged his counterparts to transition the initiative from statements of common cause to an emphasis on the execution of infrastructure projects.

The Bucharest summit promises to meet that challenge. An agreed list of priorities, including regional telecom, energy, and transport projects is expected to be rolled out at the summit and will serve as the focus for regional political and economic coordination.

The summit will highlight the signing of a multinational letter of intent to create a Three Seas Investment Fund. Championed by Poland, the effort underscores financial commitment to the 3SI at a regional level. Juncker’s participation in the summit reflects a crucial endorsement as EU funding continues to be critical to Central Europe’s economic development.

And, a network of Chambers of Commerce from across Central Europe will be launched to promote these 3SI priority projects.

Perry will lead a US government interagency delegation to the summit. His presence will underscore the Trump administration’s continued and firm commitment to the 3SI, as well as Washington’s desire to see the initiative shift to a more operational and project-oriented focus.

Occurring in tandem with the summit will be the first Three Seas Initiative Business Forum on September 18—a forum Trump suggested in Warsaw in 2017.  It will bring to Bucharest business leaders, policy makers, and experts to strategize the way forward on the priority list of Three Seas infrastructure projects.  The forum will also feature panels that will seek to address broader economic and security issues now defining Central Europe.

The 3SI is a strategically significant undertaking that fully merits the US government’s support. The development of Central Europe’s cross-border infrastructure is not only essential to the region’s economic development, but also to its integration into Europe as a whole. It is critical to overcoming the legacy of infrastructural estrangement from Western Europe that Cold War occupation imposed on Central Europe. In these ways, the Three Seas Initiative is as important as NATO and EU membership to completing the vision of an undivided Europe.

Ian Brzezinski is a senior fellow in the Atlantic Council’s Scowcroft Center for Strategy and Security. Follow him on Twitter @IanBrzezinski.