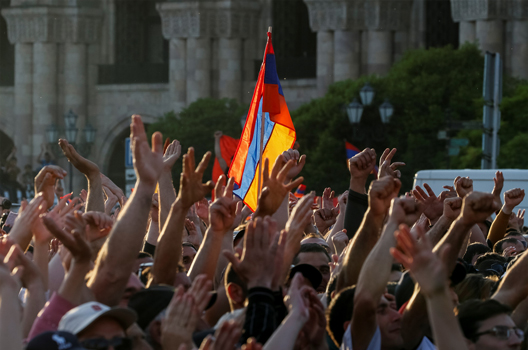 Days after a wave of protests won an enormous (and unlikely) victory by forcing the resignation of Armenian Prime Minister Serzh Sargysan, his Republican Party still seems reluctant to let their grip on power slip away. Opposition leader Nikol Pashinyan could be confirmed as the new prime minister in a parliamentary vote on May 8.

Time will tell whether Sargysan’s resignation on April 23 was a genuine step away from one party rule or little more than a sacrificial offering to the protesters. Armenia’s steps toward democracy are likely to be tortuous and fraught.

After pushing through constitutional changes in 2015 to make Armenia a parliamentary government, Sargsyan (president from 2008-18) attempted to transition from the now largely ceremonial presidency to the governing position of prime minister. He was elected to the position on April 17.

However, his power grab was not met quietly by the people of Armenia. In the wake of Sargsyan’s election, thousands of citizens, mostly young people, took to the streets in a show of non-violent protest again his attempt to hold on to power. Protestors blocked traffic and demonstrated outside government buildings.

As a result of the political pressure, Sargsyan was forced to meet with Pashinyan. After their meeting on April 22, Pashinyan was arrested, but the public outcry was such that the next day he was released and Sargsyan resigned. Until a new leader is elected, former Armenian Prime Minister Karen Karapetyan will serve as acting prime minister.

Popular demands for democracy have simmered in Armenia for some time, dating back to Sargsyan’s re-election to a second five-year presidential term in 2013 amid claims of voter fraud and lack of opposition candidates. While the most recent protests successfully pushed Sargsyan to resignation, Karapetyan is an old ally of his.

Can this new wave of political protest successfully check the rise of a postmodernist constitutional dictatorship in Armenia? Or is this just the latest futile attempt to change an unchangeable Armenian political system? There are no simple answers to these questions, but it is precisely because the implications of these events remain unclear that they deserve deeper attention. Armenians have had enough of the country’s corrupt politics and it is time for the world to take notice and to act.

However, Armenia’s dependence on Russia for military support, trade, and energy has created the impression that any Western intervention would prove futile. Armenia is culturally and historically linked to Russia. Its relations with Turkey remain fraught. Both of these circumstances push the country further from the West and NATO, further discouraging European or US action on these issues. For the people of Armenia, the West’s apathetic acceptance of the status quo means a bleak future with limited political freedom and nearly a complete lack of economic opportunity. If the West does not begin to build economic and political bridges with Armenia, the gains of this protest movement are likely doomed in the long term.

Nevertheless, many Armenians aspire to live in a functional, sovereign state ruled by laws, and not beholden to the corruption perpetrated by Kremlin-backed autocrats. This conflict between democracy and dictatorship, between economic opportunity and cronyism, is crucial in today’s geopolitics, and has manifested in Armenia’s current political crossroads.

In light of these circumstances, the present protest movement should not be ignored. There is a great deal at stake in Armenia, not only for Armenians, but also for international democratic norms and US interests along the contested borderlands between the European Union (EU) and Russia.

Republican rule in Armenia has been characterized by questionable election practices, corruption, and the repression of the population. These realities, and the regimes that create them, need to be condemned by European and US political leaders. Local forces that support transparency need to be nurtured. If the EU and the United States wish to advocate for democracy and transparency in the world, the plight of Armenia cannot be ignored. Ultimately, the situation has ramifications that reach beyond Armenian borders to other countries struggling with similar circumstances.

The peaceful popular uprising that recently shook Armenia is sadly familiar. Turks, Russians, Ukrainians, and Georgians have all risked their lives and livelihoods to protest the overreach of their governments and the erosion of political liberty and economic opportunity in their countries. Along the border between the EU and Russia, such events are particularly commonplace where people attempt to shed their Soviet legacies. They want market economies, not economies based on bandit privatization for the governing elites and their friends. They want functional democracies, not sham elections dominated by single parties devoid of fundamental checks and balances. They seek geopolitical independence, not the surrender of their sovereignty to Moscow.

The relative silence from Moscow on the evolving “Velvet Revolution” in Armenia cannot be taken for granted. If Russia senses that its relationship with Armenia is threatened, it will act to isolate the democratic reformers, co-opt them, or overthrow them. As in Georgia and Ukraine, Moscow will have its say.

The use of Russian armed forces in Armenia is unlikely. Pressure could be brought to bear on Armenia economically, through the withholding of military aid necessary in Nagorno-Karabkh, or by Russia moving toward closer ties with Azerbaijan. If the West does nothing to foster tangible outcomes from these democratic protests, things will change in Armenia only so they can remain the same. In other words, reform will be superficial rather than substantive and Armenia will remain a poor Russian satellite.

For US and European policymakers, stability in volatile countries on the edge of Russia’s sphere of influence can best be assured through the establishment of functional, sovereign, and democratic governments. Dictatorship serves only to reinforce dependence on Moscow. If the United States is serious about confronting Moscow and protecting the borderlands between Russia and the EU from a return of Russian imperialism, situations like those in Armenia require supportive action. If US and European policymakers wish to follow through on claims to promote democracy and support the international order, the people of Armenia should not be left to resist their oligarchic regime and systemic corruption entirely on their own.

Many Armenians are individually proud of the role they played in the collapse of the Soviet Union. Perhaps they will also someday claim some small degree of credit for challenging the trend of post-modern dictators. US and European political leaders are proud of the legacy of liberty they have established in Europe and their victory in the Cold War. It would be a shame to see that legacy continue to erode along Russia’s borders because the West continues to do too little.

Andrew R. Novo is associate professor of strategic studies at the National Defense University. This piece reflects his opinions and not those of the United States government or the US Department of Defense.