In late April, Russian Foreign Minister Sergei Lavrov accused NATO of waging a “proxy” war against Russia by supporting Ukraine as it defended itself from a Kremlin invasion. “War means war,” he said ominously, implying that the Alliance is stoking Ukraine’s resistance to advance its own interests.

It is easy to dismiss Lavrov’s claim as another product of Kremlin myth-making, and in reality, Ukraine’s status as a proxy for the United States and NATO may be a matter of interpretation. Yet there is a kernel of truth to it: The Alliance is now engaged in a Cold War-style engagement with Moscow, in which both NATO and its Ukrainian partner risk pursuing their interests possibly at the unjust expense of each other.

That the United States’, much less NATO’s, military support for Kyiv raises ethical concerns is no surprise; states rarely provide military assistance to other parties unless their interests are also served. But even well-intentioned pursuits—in this case, helping a strategic ally beat back a stronger aggressor—can end poorly. The more their otherwise shared interests diverge, the higher the risk of failure for both the sponsor and the sponsored. Even when those interests are well-aligned, assistance (especially of the lethal variety) can create moral hazards that may render otherwise just causes too dangerous to pursue.

So whether the United States and its NATO partners are in a textbook proxy relationship with Ukraine matters less than the potential consequences if that relationship isn’t properly managed. Both parties should pay close attention to these possible perils—if not out of a commitment to the values associated with the liberal international order, then at least to deny Russia a narrative that can make its cause seem more legitimate.

The politics of proxy wars

One state providing military support to another does not itself establish a proxy relationship, even if the beneficiary is at war. It is when a sponsor is able to achieve its own goals “by, with, and through” the efforts of the sponsored party that elements of such a relationship emerge. Simply put: Proxy wars allow a sponsor country or entity to more easily achieve goals without committing its own forces directly to the conflict. It does not matter that the interests are shared between the two parties—but that the sponsor would have that interest independent of the relationship.

For example, when US Secretary of Defense Lloyd Austin said Washington’s (if not NATO’s) intent was a “weakened” Russia, he introduced a potentially divergent interest from Ukraine’s by suggesting that simply restoring Ukrainian sovereignty wasn’t the end game. President Joe Biden helpfully closed any gaps in a recent New York Times op-ed by affirming that the United States wants “to see a democratic, independent, sovereign, and prosperous” Ukraine, and that “to prolong this war just to inflict pain on Russia” is not its objective.

Even with this helpful clarification, it is important to point out that sharing interests is not the same as aligning them. While both NATO and Ukraine want to defeat Russian aggression now and prevent future outbursts, they may not share an interest in imposing the same costs required to do so. For example, Ukraine arguably has an interest in striking inside Russian territory—but conducting such attacks with NATO-supplied equipment may represent an escalation that is not in NATO’s interest. For that reason, restricting Ukraine’s use of US advanced artillery, for example, seems prudent. This illustrates that despite the best of intentions, interests rarely perfectly align.

Sponsor and proxy interests do not need to be identical. But they should be aligned well enough that the proxy’s success satisfies the sponsor’s interests—or leads to the conclusion of the proxy relationship. If the interests of NATO and Ukraine diverge, for example, then Ukraine’s should generally take priority. And if, from the Ukrainian point of view, the cost of fighting exceeds the cost of settlement, NATO should not get in the way of a settlement. If, on the other hand, the only way to restore Ukraine’s sovereignty is to escalate, then NATO will need to choose between providing support or committing to escalation. A mistake on NATO’s part would be to enable Ukraine to engage in an escalatory cycle that the Alliance is not willing or able to see all the way through.

But proxy wars are not just about aligning interests. Like all wars, they are also guided by international law, which permits wars of self-defense (or the defense of others), certain humanitarian interventions, and other military operations authorized by the United Nations Security Council. There are further ethical concerns not enshrined in law that include proportionality, last resort, and reasonable chance of success. A sponsor’s involvement will not make a fundamentally unjust cause just. However, by lowering the proxy’s costs and risks of fighting, the sponsor can make fighting more proportional, winning more likely, and thus war more attractive.

In this case, helping Ukraine defend itself is a just cause, and aiding the country is clearly permissible. But sponsors’ reasons for intervening should also meet a standard of justice; otherwise, any additional deaths risk being unnecessary. Arming Ukraine to uphold a just international order is clearly permissible—but arming it to, say, open markets or gain access to natural resources for Alliance members is not. (And those do not appear to be NATO’s goals.) Similarly, arming Ukraine simply as a pretext to expand NATO would only feed into the Russian narrative.

Even where interests align and the costs of fighting seem reasonable, supporting another’s war is not without moral risk. In the case of proxy wars, moral hazards arise when the sponsored entity assumes greater risk because it knows the sponsor will have to bear some, if not all, of the burden associated with that risk. For example, Ukraine could decide to impose greater costs on Russia than would be necessary to re-establish sovereignty because NATO support underwrites the risk associated with a Russian response.

The presence of moral hazards does not directly affect the legitimacy of a proxy relationship—but failure to manage these hazards can effectively transform an otherwise legally permissible intervention into one that is morally ambiguous or impermissible. Should the conflict expand beyond Ukraine, military assistance be used in ways not intended, or Ukrainian soldiers engage in the kinds of atrocities Russians have in Ukraine, it could undermine the very international order that assistance is meant to uphold.

This concern is particularly relevant when it comes to escalation, the wild card factor in Russia’s invasion of Ukraine. With Russia already believing the war is effectively a battle against the West and NATO, there is a two-fold concern here: First is the possibility that a potential Russian defeat could motivate Putin to not only expand the conflict by attacking NATO countries but also resort to using nuclear weapons; and second is NATO sponsors determining in the event of an escalation that continued support is no longer worth the risk, potentially hanging Ukraine out to dry.

Managing escalation also requires calibrating assistance. As mentioned above, prudence can require sponsors to impose limits on assistance to avoid expanding the conflict. But it also makes no moral sense to provide just enough assistance to prolong the war and increase the suffering. This suggests NATO should indeed provide lethal assistance to defeat Russian forces as fast as possible; but since such systems could enable attacks inside Russia, its members must be prepared to bear the practical costs of that escalation, or at least be clear about the limits of their assistance.

Related to escalation is the diffusion of weapons in a post-conflict environment. Probably the best example of this hazard is the spread of Stinger anti-aircraft missiles in Afghanistan following the Soviet withdrawal in 1989. After the conflict ended, these missiles were found as far afield as Bosnia, Iran, the Indian-administered Kashmir region, Tunisia, and the Palestinian territories. The same could happen with Ukraine, where an estimated tens of thousands of anti-tank missiles have been handed out to a wide variety of forces. There is no single way to manage this particular moral hazard; but in the case of Ukraine, the United States and NATO should also help Kyiv ensure that it is able to maintain accountability throughout the course of the conflict.

Lastly, the indirect nature of the proxy relationship means sponsors can often be tainted by the potentially unsavory tactics of their proxies. So far, this has not been a major concern for NATO; Ukrainian forces are fighting a just cause on their own territory and appear to be exercising due care relative to civilian casualties. But it is also not difficult to imagine that some Ukrainian soldiers may exact revenge—evidence has already emerged of abuse of captured Russian soldiers—as they retake territory.

Of course, war is brutalizing, and it is generally not possible to prevent all soldiers from committing war crimes. That fact, however, is not an excuse for complacency. What matters is whether the Ukrainian government would be willing and able to hold perpetrators accountable. If they fail on either count, NATO would be in the position of needing to consider withdrawing support or sharing culpability for whatever crimes Ukrainian soldiers commit. To avoid being placed in such a position, NATO sponsors should ensure that Ukrainian forces are committed to upholding international humanitarian law and can hold violators accountable. If those standards aren’t met, NATO should withhold lethal support.

Proxy relationship or not, both NATO and Ukraine must do more than share interests; they must also align them. This is an ongoing challenge, since the costs and benefits of the fighting continually change for each party.

Meanwhile, the potential for moral hazards never goes away. So far, NATO and the United States have managed escalation while providing sufficient assistance to prevent a Russian victory (if not eventually achieve their defeat). Yet more attention should be paid to the possible proliferation of lethal assistance to ensure the United States will not need to buy back, for instance, Javelin anti-tank systems in the future. Finally, while Ukraine’s soldiers have shown admirable restraint so far, it’s not too late to engage Ukraine on war-crime prevention to avert the potential need for NATO to reconsider its support.

Regardless of how one wants to characterize the United States’ and NATO’s relationship with Ukraine, failure to address these concerns risks tainting NATO’s support, undermining the legitimacy of Ukraine’s cause, and emboldening Russia’s narrative in ways that could be decisive to the conflict’s outcome.

C. Anthony Pfaff is a nonresident senior fellow at the Atlantic Council and the research professor for strategy, the military profession, and ethics at the US Army War College’s Strategic Studies Institute. He is the author of “Proxy War Ethics.” The views expressed here are the author’s own and not necessarily those of the United States government. 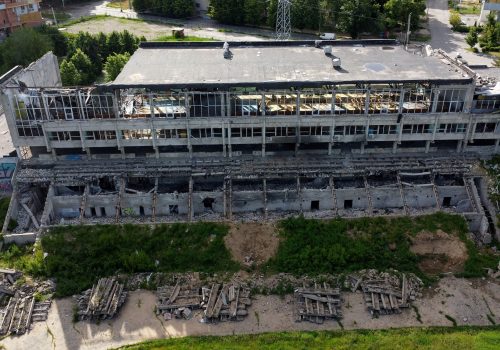 It’s time to show Putin a dead end in Ukraine, not an off-ramp

The West needs to pursue a Ukrainian victory, and offering Putin an off-ramp instead would be a big mistake. 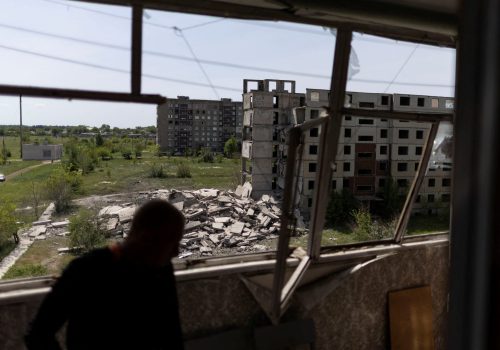 Three possible futures for a frozen conflict in Ukraine

As the war in Ukraine grinds on, our experts lay out several scenarios that could reshape the world. 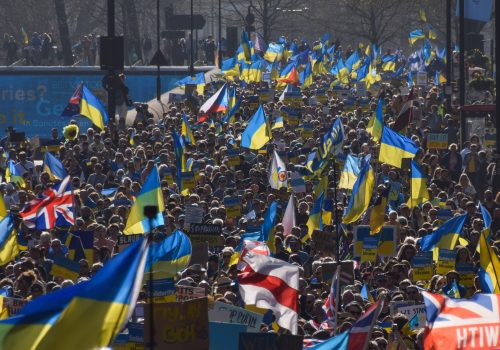 Image: Ukrainian soldier checks the crater after the impact of a russian rocket over a high school in Kostiantynivka, Donbass. (Photo by Celestino Arce/NurPhoto)NO USE FRANCE