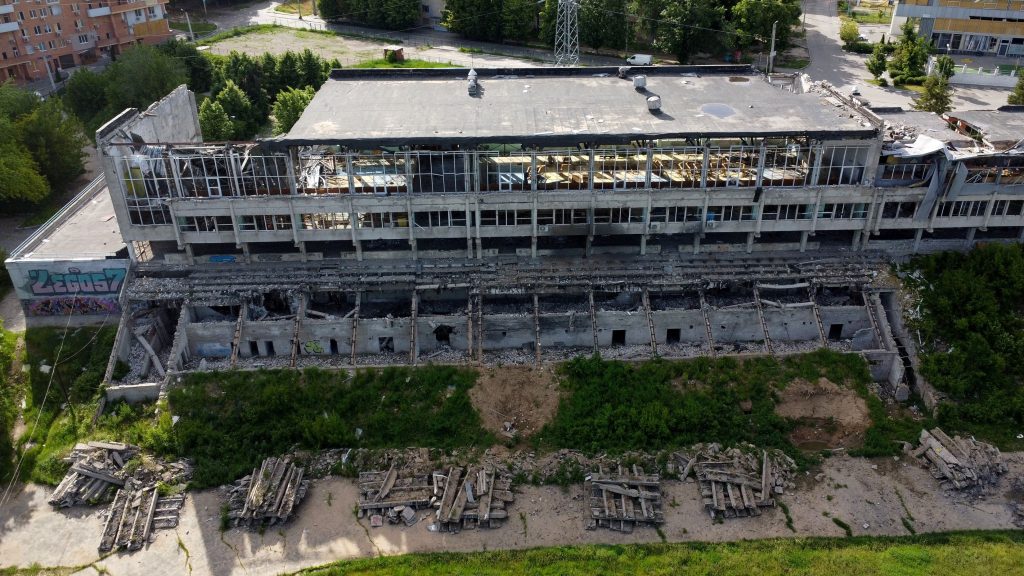 So, Let’s first stipulate that you agree with that end goal, as has everyone from US President Joe Biden and Speaker of the House Nancy Pelosi, to German Chancellor Olaf Scholz and European Commission President Ursula von der Leyen.

To embrace anything less would be immoral, set a historical precedent with catastrophic costs, and unravel what remains of our fraying international order of rules and institutions.

Biden laid out the argument clearly in his New York Times op-ed this week. His words should be read closely by all members of his administration and NATO allies who are still acting too tentatively in providing Ukraine the weaponry, and the freedom of action in using it, to ensure Ukraine’s victory.

“Standing by Ukraine in its hour of need is not just the right thing to do,” wrote Biden. “It is in our vital national interests to ensure a peaceful and stable Europe and to make clear that might does not make right. If Russia does not pay a heavy price for its actions, it will send a message to other would-be aggressors that they too can seize territory and subjugate countries… And it could mark the end of the rules-based international order and open the door to aggression elsewhere, with catastrophic consequences the world over.”

Why write all this now, as Putin’s war in Ukraine passes its hundredth day? Put most simply, it’s because Putin is showing grinding gains after shifting tactics in response to Ukraine’s unexpected victories and resilience, and Russian troops’ heavy losses and abysmal performance in the war’s early stages.

Putin’s brutal new approach is to pulverize Ukrainian population centers in eastern and southern Ukraine with stand-off weapons—thus emptying them of their people through death or flight, with less risk to his own troops, replicating the brutal tactics he deployed in Syria. Once these cities and towns are drained of their humanity, his troops can then “liberate” the rubble, seize the territory, and position Russia for the most advantageous peace deal possible, or a further offensive.

At the same time, Putin has been striking at Ukraine economically by blockading its grain exports and either destroying or stealing its available supplies. Though Putin continues to choke on tough sanctions against him, he is willing to risk starvation elsewhere while wagering that he can outlast Western support for Kyiv through upcoming election cycles and other democratic distractions such as the recent US school shootings and Supreme Court battles.

“We need to discard Cold War mentality and seek peaceful coexistence and win-win outcomes,” he said, just a matter of days before he signed a joint statement with Putin agreeing to a relationship “without limits.” That, in turn, was a little more than a month before Putin launched his war.

There is a way, however, to counter Putin’s new tactics. It will require the newly united West and its Asian partners to grow even more determined, creative, and proactive through a combined military, economic and public relations offensive that would again put Putin on his back foot.

The aim should not be to ensure a stalemate, which has allowed Putin to take 20 percent of Ukrainian territory, nor pressure Ukraine into a self-defeating peace agreement, but rather give Ukraine the means to retake territory through a counteroffensive—perhaps most importantly to retake Kherson, which would ensure access to Odesa and to the Black Sea now and in any eventual peace agreement.

Most important is for Ukraine’s potentially fatigued supporters, and even for those countries still sitting on the fence, not to lose sight of the barbarity of Putin’s atrocities and thus the moral responsibility to oppose them.

“It’s extremely important that we don’t forget the brutality,” Jens Stoltenberg, NATO’s secretary general, told the Atlantic’s Tom McTague in the most emotional of terms. “Of course, it is emotional. This is about people being killed; it’s about atrocities; it’s about children, women being raped, children being killed.”

With that in mind, it’s flat wrong for the United States or any arms supplier to limit Ukrainian fire to hitting only Russian targets on Ukrainian soil. In his otherwise excellent op-ed, Biden wrote, “We are not encouraging or enabling Ukraine to strike beyond its borders. We do not want to prolong the war just to inflect pain on Russia.”

Think about that for a moment. If someone is killing your family members by shooting across a fence from your neighbor’s yard, what good is a weapon that can only shoot as far as your side of the fence? If you don’t take out the shooter, the killing continues. It’s this kind of weakness that makes Putin so confident he can win through attrition.

At the same time, the collective West, working closely with Turkey, needs to open Ukraine’s Black Sea ports, particularly at Odessa, to address a Putin-generated global food crisis and enable Ukraine to ship the twenty-eight million tons of grain it has in storage.

For justification, one can call upon the Montreux Convention of 1936 that regulates traffic through the Black Sea and guarantees “complete freedom” of passage for civilian vessels.

Said David Beasley, executive director of the United Nations World Food Programme, “Failure to open those ports in Odesa region will be a declaration of war on global food security.”

Historians point to the Winter War between the Soviet Union and Finland in 1939-1940 to demonstrate that a smaller but more determined country with less military strength can outlast Moscow and retain its sovereignty.

What’s true is that Moscow then, despite overwhelming strength in tanks and aircraft, suffered severe losses and made few gains initially following its November 1939 invasion, three months after the outbreak of World War II.

Finland held off Soviet forces for more than two months, inflecting substantial losses before the Soviet Union adopted different tactics and overcame Finnish defenses in February. Finland reached a peace deal in March 1940 that ceded 9 percent of its territory to the Soviet Union. Though Moscow’s reputation suffered, and it was removed from the League of Nations, it came away with more territory than it had initially demanded.

On the negative side, Putin is every bit as determined now as Soviet dictator Joseph Stalin was then, and shares Stalin’s utter indifference to casualties and human suffering.

On the positive side, Ukraine is receiving dramatically more outside support than Finland did at the time.

Yet without even more Western resolve, Putin can still win, and Ukraine can still lose.

Ukraine and the West need to show Putin a dead end and not an off-ramp.

This week’s must-read is Tom McTague’s powerful interview with NATO Secretary General Jens Stoltenberg, one that underscores that NATO’s efforts to help Ukraine are as much about character as military strength.

“Although he wouldn’t say it quite so openly,” writes McTague, “he clearly believes that Ukraine is fighting not only for itself but for the civilized world, for the basic values of life and liberty, land and sovereignty. It is crucial, therefore, that the West continues to be outraged by Russia’s behavior, to not lose sight of Moscow’s barbarity as the war drags on.”

#2 President Biden: What America Will and Will Not Do in Ukraine
Joseph R. Biden Jr. | NEW YORK TIMES

To get a better understanding of the US strategy on Ukraine, and the Biden administration’s rationale, read this op-ed by President Biden laying out US aims.

“America’s goal is straightforward,” Biden writes. “We want to see a democratic, independent, sovereign and prosperous Ukraine with the means to deter and defend itself against further aggression.”

Biden adds, “Standing by Ukraine in its hour of need is not just the right thing to do. It is in our vital national interests to ensure a peaceful and stable Europe and to make it clear that might does not make right. If Russia does not pay a heavy price for its actions, it will send a message to other would-be aggressors that they too can seize territory and subjugate other countries. It will put the survival of other peaceful democracies at risk. And it could mark the end of the rules-based international order and open the door to aggression elsewhere, with catastrophic consequences the world over.” Read more →

Despite the fearsome reputation of Xi Jinping’s intelligence services, as The Economist points out, China’s spies are much better at harassing dissidents and technology theft than stealing government secrets and uncovering information.

Take the Russian invasion of Ukraine, for example. “Whatever Vladimir Putin told Xi Jinping when the two presidents met in Beijing on February 4th,” The Economist writes, “China did not seem prepared for Russia’s invasion three weeks later. One giveaway was its failure to make plans to evacuate its citizens in Ukraine. China’s embassy first advised them to stay at home or fix a Chinese flag ‘on an obvious place on your car’… Two days later the embassy retracted its advice, warning citizens: ‘Don’t show your identity or display identifying symbols.'”

Writes the Economist: “Mr Xi appears to be making enormously consequential decisions based on dodgy intelligence. It is unclear whether the root cause is the information itself, the analysis applied or how it is communicated to China’s leaders. In any case, the outcome could be deadly miscalculation.” Read more →

“We find that safe spaces for dissent are rapidly shrinking around the world,” they write. “Based on a data set of 735 documented incidents of explicit transnational repression that occurred between 2014 and 2021, we show that authoritarian governments are increasingly working together to help locate, threaten, detain, and expel their critics. Moreover, thanks to the restrictive asylum policies of many democracies that could otherwise serve as havens for dissidents, there are fewer safe places available for those seeking shelter from persecution. If democracies want to shore up liberal values and human rights worldwide, they could start by welcoming those who are risking their lives to stand up to authoritarian regimes.”

Read this for a clarion call on the importance of protecting dissidents—a vital part of promoting democracy around the world, and pushing back against authoritarianism.
Read more →

This open letter signed by over thirty experts and former officials, including several at the Atlantic Council, is a powerful call to stay the course in Ukraine and not to pressure President Volodymyr Zelenskyy into a self-defeating peace deal.

“The United States and Europe,” they warn, “must avoid the urge to encourage Kyiv to negotiate a cease fire that falls short of Ukraine’s goals and could consign millions of Ukrainians to Russian control; after all, Putin denies the legitimacy of a unique Ukrainian identity, and Russian forces have already committed countless war crimes against them. Moreover, the Ukrainian side has tried to engage in good-faith negotiations, but got nowhere because Putin has shown no interest in serious negotiations. Western pressure on Kyiv to begin negotiations or accept a cease fire that the Ukrainians do not want would likely harden the Kremlin’s attitude and prolong the fighting.”

Read this in its entirety, including the powerful group of signatories at the end. Read more →

Central banks are embracing digital currencies. Will the US lead or follow?

Six takeaways from our new research on fiat-based digital assets around the world and what they’ll mean for your wallet.

Why Biden’s limited Somalia deployment is the right move

Given the persistent terror threat from al-Shabaab, Washington’s decision to send US troops into Somalia deserves credit and support.