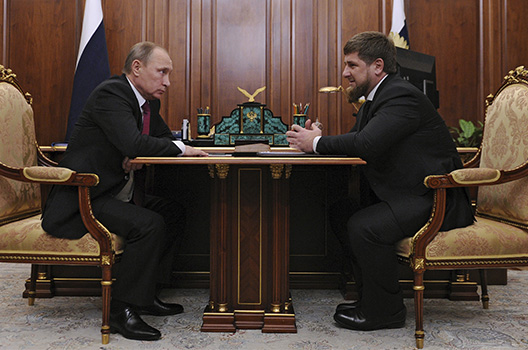 “I ask Ramzan Akhmatovich for forgiveness and thank him for not yet killing me.” This is an example of the messages Russian opposition members have been posting on their social media pages. They are appealing, of course, to the leader of the Chechen republic Ramzan Kadyrov.

The story of this social media campaign begins on January 12, when Kadyrov declared that all members of the “non-systemic opposition”—those who truly oppose Russian President Vladimir Putin—are “enemies of the people.” In response, opposition parliamentarian, Konstantin Senchenko, wrote on Facebook that Kadyrov was “the shame of Russia.” In the post, Senchenko said that the Chechen leader discredited everything that was great about Russia. Kadyrov demanded an apology. On January 15, Senchenko allegedly spoke with some “serious” people from Chechnya and then immediately apologized to Kadyrov in front of a camera. His hands shook and his voice trembled.

Some opposition members were disappointed by Senchenko’s apology, but others quickly rose to his defense, reminding the others of the fate that often befalls Kadyrov’s enemies. In the aughts, Kadyrov’s bodyguard, Umar Israilov, fled to Europe and publicly revealed his former boss’ many crimes, linking him to a series of murders, kidnappings, and torture between 2003 and 2005. In 2006, Israilov was given political asylum in Austria. Three years later, he was shot at the entrance of a supermarket in Vienna. Whoever ordered the shooting was never found because the Russians refused to cooperate with the Austrian investigators. Kadyrov ignored the incident.

On September 24, 2008, Ruslan Yamadaev, who was reportedly being considered as Kadyrov’s replacement, was shot dead in Moscow. After the murder, one of Ruslan’s brothers, Sulim Yamadaev, fled to the United Arab Emirates where he, too, was fatally shot on March 28, 2009. He died two days later. A third Yamadaev brother, Isa, accused Kadyrov of ordering the murders. An attempt to assassinate Isa failed.

The assassination of Boris Nemtsov, the prominent Russian opposition politician, marked the most significant recent attack on a Kadyrov opponent. Nemtsov was shot directly across from the Kremlin on February 27, 2015. Chechen criminals have been accused in the assassination. The person who ordered the shooting has so far not been identified. Ilya Yashin, a close friend and colleague of Nemtsov’s, and many others are convinced that the trail leads to Kadyrov.

Russian politicians are too terrified to talk about Kadyrov’s alleged connection to such crimes. Still, many popular liberal bloggers, politicians, and journalists publicly support Senchenko’s statement that Kadyrov is the shame of Russia. They are showing their support using the hashtag #KadyrovShameofRussia (#КадыровПозорРоссии). The movement is gaining momentum and the attention of Chechen elites. A day after the hashtag was launched, Chechen elites started their own, #KadyrovPrideofRussia (#КадыровГордостьРоссии).

The head of the Chechen parliament and Kadyrov’s close ally, Magomed Daudov, posted a photo on Instagram of Kadyrov’s guard dog Tarzan who, according to Daudov, is ready to tear to pieces all enemies of the people. In the same post, Daudov listed the names of journalists and politicians that he considers traitors to Russia.

In a lighthearted response, opposition members posted on their social networking accounts photos of their own pets, including furry cats, ostensibly ready to face Tarzan head on.

This barrage of threats has been taking place under the Kremlin’s nose. No one in Moscow—not Putin, not Prime Minister Dmitry Medvedev, not Duma Chairman Sergei Naryshkin, not Federal Assembly Speaker Valentina Matviyenko—has commented publicly on Kadyrov’s behavior. Kadyrov appears to be untouchable in Russia today.

Experts offer several explanations for the harassment of the opposition by Kadyrov and his inner circle. According to one explanation, Chechnya’s economic crisis is driving its leadership to prove its loyalty to the Kremlin. But this argument overlooks Kadyrov’s wild card: a massive personal army that is loyal to Kadyrov alone. In these circumstances, Moscow’s support and influence is increasingly irrelevant in Chechnya. If federal authorities attempt to arrest Kadyrov, a third Chechen War will break out—a conflict that the Kremlin can ill afford. Putin has become a prisoner of his own creation.

Another argument, and one that is closer to the truth, states that Kadyrov is trying to see how much he can get away with. He acts and waits to see what the Kremlin’s reaction will be, or more precisely, whether the Kremlin will react at all. Kadyrov is testing Putin, making sure that his own power is truly uncontested.

Opposition figure Alexei Navalny offers another convincing theory on Kadyrov. He proposes that as the first anniversary of Nemtsov’s murder approaches, the Chechen leader is trying to divert attention away from his own implication in the case by starting a war of words with the liberal opposition.

Considering that there has been no information so far on whether or not Kadyrov is included on any sanctions lists (with the exception of one report in 2013 that said he was on a “classified list” of targets of US sanctions), the odious politics out of Chechnya may not just be a problem for Russian opposition leaders: nobody knows who Kadyrov will consider an enemy tomorrow.

Despite threats, the opposition is not backing down. Last week, Yashin announced that he and his team had completed a new report on Kadyrov, tentatively titled, “Kadyrov: A Threat to National Security.” Yashin will launch the report on February 23, a symbolic day in Russia as it celebrates the “Defenders of the Fatherland”—veterans and those who have served the country. So far, few Western media outlets have reported on the ongoing threats to the Russian opposition and the men and women brave enough to stand up to Russia’s Chechen mafia. As the anniversary of Nemtsov’s murder approaches, this must change before more brave Russians fall to the same fate.

Aleksandra Garmazhapova is a journalist with Novaya Gazeta, St. Petersburg, and a columnist with the Free Russia Foundation.